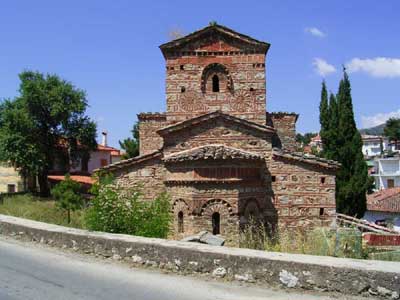 The Byzantine emperors, it is said, regularly exiled dissident members of their court to Kastoria. Like Ochrid to the north, half-way across the breadth of the Balkans on an artery reaching from Constantinople to the Adriatic Sea, evidently exile in this little Greek lakeside resort was meant to be a chastening punishment.

Today, such punishment is a rare pleasure. Kastoria boasts a Byzantine heritage that seems second to Constantinople. But, unlike Istanbul, this little town in summertime enjoys a captivating serenity. In wintertime, I should add, it is entirely different, so they say. For this is the fur capital of Greece, a status it owes to its ancient heritage of trapping beaver (beaver in Greek being kastori, with the plural being kastoria) in Lake Orestiadha. An inexplicable number of shops fit out Greece’s best-dressed women in bulky coats as well as tight leather, risking political incorrectness in most other European countries.

Lake Orestiadha is graced by pelicans. These bewitchingly beautiful birds circle around the lakeside like jumbo jets before effortlessly descending, twisting then gliding to plop onto the water close to shore alongside the ungainly but distinctive watercraft here. The restless pelicans catch your eye as you enter the town, which has colonised the isthmus of a steep and bulbous promontory reaching out into the northern part of the lake. Refurbished Roman fortifications belonging to ancient Celetrum were probably first renovated in the 6th century AD when this had become Justinianopolis. These were strengthened again with 13th century bastions by the Epirot Despots. The unevenly restored walls extend across the narrow neck, in front of which is the daily market of local farmers, men and women from the slopes of the Grammos mountains, wizened by long summers. Rising steeply behind the walls is the modern town with its roots in Byzantium and the Ottoman age. Along the west-facing shoreline is a string of bright cafés; this is the heart of the present city. By contrast, the east-facing shoreline, tracked by a promenade, is shaded by planes and has an elegiac air. Here the discrete sense of serenity is profound as the trees drift past the excellent Kastoria Hotel into the thicker woodland that shrouds the narrow sylvan track that winds around the promontory a distance of some six miles.

A rose with thorns

Many consider Kastoria the most beautiful town of mainland Greece. Being unaffected in its natural setting with so many monuments, it certainly ranks alongside Napthion, for example. In common with most Greek towns, being on a passage from East to West, it has had many occupants since Roman times. Apart from the Byzantine community, there were Franks, the Epirot Despots, Bulgars and Serbs before it was seized by the Turks in 1385. It remained in Ottoman hands until the first Balkan war in 1912 when it became one of the northern reaches of the new Greece. Its mid 20th century history was bitter. A plaque records the round-up of Jews, merchants famed since Ottoman times in the furrier business, during the Second World War. No sooner had this anguished period ended, than the city was caught in the grip of the Greek Civil War of 1947-1949 when the Communist army retreated with huge losses across the nearby Grammos mountains and through the passes immediately to the north of Kastoria before evaporating into Albania. Today, a statue to the American commander who assisted the Greek government, General James Van Fleet (1892-1992), commands the undistinguished square immediately behind the fortifications, bearing witness to this bitter period.

Kastoria, though, is known not for its conquerors, exiles or bitter episodes but for its 50 or so frescoed churches. The churches are ubiquitous, dotted within the web of streets criss-crossing the steep flanks and long saddle-back that form the town occupying the isthmus. It is best to get guidance on keys from the Byzantine Museum on the Platisa Dhexamenis, an uncomfortable modern edifice in the centre, otherwise it is pot-luck to gain entry.