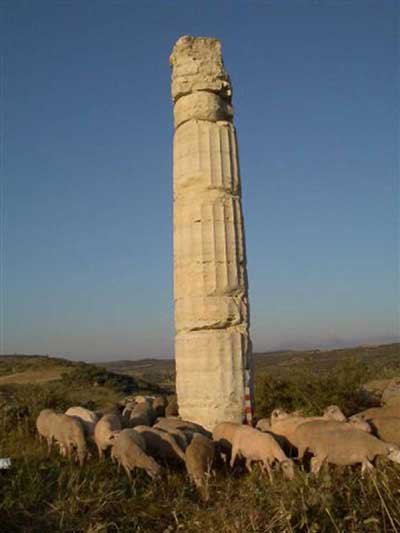 2005 is election year in Albania and this spells trouble for Apollonia, one of Albania’s most important archaeological sites. As improbable as it now seems today, after battling along pot-holed roads evading carts, free-ranging pigs and beaten-up Mercedes’s driven with insane speed, Apollonia possessed one of the great libraries in the Roman Empire. So, rather than stay at home in Rome and enjoy the resources there, the ever-ambitious Octavian (the future Emperor Augustus) as a young man took most of a ‘gap year’ and went to study in the library at Apollonia. Today Apollonia lies several kilometres inland from the Adriatic coast. Indeed, like Ephesus in Turkey, the alluvial plain stretches so far beyond the site that it is difficult to imagine it ever held any maritime status. Now though, as I write, the site is at the heart of an interesting tussle between archaeologists and planners, reminiscent of British archaeology in the 1960s.

Apollonia was founded as a Corinthian colony in the early 6th century BC and grew steadily in status, in competition with Epidamnos, ancient Dyrrhachium (modern Durrës) to the north. Its zenith was in Hellenistic and perhaps Republican times, when this prominent walled hilltop was packed with monumental buildings and, in the valleys to the south, a great cemetery of tumuli was created. The site has witnessed a long history of investigation, most prominently by French archaeologists. The first of the French archaeologists was Leon Rey, whose campaigns beginning in 1924 lasted until the Italian conquest of Albania in 1939. Rey’s work was competent enough, but in reality it was a cover for French exploration of the surrounding oil-field. A Soviet mission briefly excavated here in the late 1950s when Nikita Khrushchev was actively exploring the options to site nuclear submarine bases on the Albanian coast. With the fall of communism in 1991, the French returned and by 1994 had built a comfortable headquarters where the team could live and work. Under Jean-Luc Lamboley from Grenoble University, the team has been advancing Rey’s work on monumental buildings beyond the ancient stoa. The base has also been home to a University of Cincinnati team led by Jack Davis who has introduced modern field survey techniques to Albania. Davis, working with Muzafer Korkuti, the director of the Institute of Archaeology, has revolutionized our understanding of the Albanian countryside. Not surprisingly, then, with the making of an archaeological park at Butrint, there were calls for a similar one at Apollonia – a site closer to the nation’s capital at Tirana and therefore better known to Albanian day-trippers. The park was included in the new 2003 Cultural Heritage act, though its exact boundaries were not defined!

Elections in Albania, as in many countries, mean a sudden splurge of state activity in an attempt to encourage voters to think that the government merits supporting. In 2001, for example, more kilometres of roads were constructed and surfaced than in the history of the country. Since then, though, road building has been at a virtual standstill despite the existence of countless aid funds for the purpose and the staggering growth in vehicles. Such conditions make Albania’s roads some of the most dangerous in Europe.

One unspoken election strategy is to persuade the electorate that it can conveniently spend weekends on one of Albania’s beaches. Critical to generating this feelgood factor is the need to upgrade the deplorable road from Tirana to the coast at Vlora with its famed fish-restaurants. Funds from an Italian government source have been given to the Albanian government to make this possible.

Accordingly, Italian engineers, well versed in designing efficient highways, have come up with a skilful (if expedient) solution. Why not divert the existing road around the edge of Apollonia, putting the hitherto isolated site – and the proposed park – right beside the highway as it leads onto the Adriatic coast? The proposed line, it is fairly certain, passes directly through the waterside limits of the ancient city as well as one of its Roman cemeteries.

Worried by this, I have been in Tirana helping the Packard Humanities Institute team in Tirana at the International Centre for Albanian Archaeology to devise a strategy to deal with a looming crisis. The ICAA and Institute of Archaeology have mounted a twin-track campaign: a team of young archaeologists has made a detailed field survey of the road’s proposed line, while in Tirana I took part in the doorstepping of the nation’s key figures. The Minister of Culture inhabits an airy elegant suite opposite the Prime Minister’s office: he is keen to avoid any conflict that generates bad electoral publicity, but which is worse a new road serving isolated communities or lost ‘bits’ of Apollonia? Inscrutable though he is, I reckon he will help us – just! The Director of roads is an engineer, an intelligent and energetic woman located in a gloomy backstreet of Tirana in a claustrophobic old communist building: she is strangely more sympathetic and wants to divert the road out into the marsh, but the aid funds are insufficient to sustain a deviation measuring a kilometre or more. The independent roads’ consultant from the EU is an improbable character holed up in a bedroom of the Chinese-styled Hotel Dajti: he is a 61-year triathlon champion from the English Midlands – he recommends reminding the Italian funders of the EU environmental impact legislation to see if they might identify a compromise to mitigate the impact of the road. The Italians are in well-guarded offices close to the centre: they are not indifferent to a mitigation strategy, but are tied to their funding stream which has been slow to materialize as the Italian government faces up to its own economic crises. Everyone reckons the road should be diverted. No-one truly believes the cumbersome state bureaucracy can be moved to achieve this.

The Apollonia crisis will come to a head this summer. As in England in the 1960s, I predict that we will get caught up in a protracted rescue excavation that could have been avoided. Given the fame of the site in Albania, though, it is likely that this case will help us to negotiate mitigation strategies elsewhere as the state faces up to providing the country with the infrastructure it needs to qualify for eventual EU membership. One way or another, it means that Albania’s archaeologists will have to concentrate less upon foreign research missions and more upon attending to urgent threats to their own heritage. The 2005 Albanian election, for sure, will leave an enduring impact upon Apollonia and the country’s archaeology.