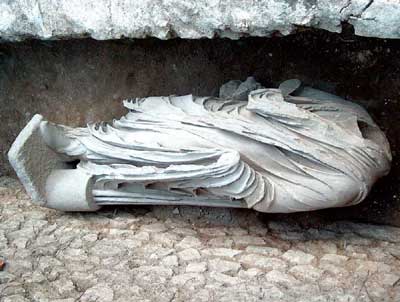 Over the years there have been several magic moments during my digging career. Trowelling down to reveal my first mosaic in a Wiltshire Roman villa was possibly the first; peeling back the dirt to expose a brightly painted ninth-century abbot in a crypt at San Vincenzo al Volturno was simply breath-taking. Now I have another moment to add to this slim catalogue.

Butrint in Albania has, over time, produced a good deal of trophy art, as some call it! Our project, however, has singularly failed to find any. Indeed, we have smiled politely and with extreme earnestness applied ourselves to the intellectual rigours of understanding the long history of this idyllic Adriatic port. So, we have bombarded the place with every intellectual weapon in the modern armoury. Our reward, without doubt, has been the fascination of appreciating that our tale is, indeed, helping to re-write the history not just of this place but of the region.

And yet, every visitor asks: ‘Where did Luigi Maria Ugolini find all those statues?’ closely followed by ‘And have you found any?’ (the latter question meaning: how come he could do it – and die at 41 in the knowledge of his achievement – and you cannot). Underlying this, of course, is the whole business of politically correct archaeology. Searching for trophy art, let me remind you, is politically incorrect unless you are chasing something taught to every university undergraduate today as [post-] post-processual/cognitive archaeology.

Now, I can provide a very good reason for our new excavations in the heart of Butrint. Not least, we have set up an interesting hypothesis about the Roman colonisation of Butrint and its great Asceplian sanctuary under first Julius Caesar then Augustus after the battle of Actium in 31 BC, based upon huge digs in the southern suburb. But how did the hypothesis square with what was happening in the heart of the town? More to the point, where was the forum, the principal public feature of the colony? (An Albanian colleague, Neritan Ceka, decided to race us to its discovery launching his own Forum 2 quest in the city!)

Well, we found the forum (a magic moment) and in an abandoned drain off to one side, we found a full-size statue. At first we exposed only its sandaled foot on a broken plinth. Days later I was telephoned to enquire how it was that I had excavated the first Roman leather sandals in Butrint! It seems that a report of the discovery of the marble figure had been mangled in the telling.

But the magic moment of the season was not in the full exposure of this headless figure with his elegantly flowing toga, but in the removal of this ton of marble from its constricted resting place in a drain little wider than the statue itself and down over two metres.

As in the way of Mediterranean archaeology, a colleague arrived at midday and said, ‘We’ll pluck it out now’….. ‘NOT NOW?’, I queried nervously, conscious of a team around me who had fallen deeply in love with this mid 2nd century headless emperor/patrician alumnus. My mind flashed back to a similar incident when I was a student supervising a dig in Turkey and my foreman browbeat me into shifting a column twice his height. His creased smiling face consumed with terror, as the column juddered a fraction off crushing him, remains etched in my memory. So, I argued fiercely with my colleague, urging him to find Kiço, the park factotum, a veritable expert at moving everything (legally and illegally). As in the way of such debates, I was told Kiço was in Greece. ‘Greece? I exclaimed, ‘he was here yesterday…’ Of course, he was only 3km away, but my colleague felt now was good statue moving weather. Still, applying firm judgement (i.e. I was overly robust in pressing my point), we postponed the lifting operation until Kiço was available at midday the next day.

So Kiço arrived with his rusty tripod and every able-bodied man he could find, plus some polystyrene. The task was simple. The statue needed to be raised up 3m and then rolled out a further 3m to the pathway where it could be then hauled onto a vehicle. Simple really. And so it proved. Kiço commanded quietly and my Albanian colleagues obeyed. One leg of the tripod was held down awkwardly by the two largest workmen, who grinned at winning their role. Then Kiço eased a frayed woven belt around the togate statue. Tugging the old communist pulley, the statue levitated into the air. Kiço quietly instructed his team of ten and before long it was balancing on the polystyrene on the adjacent wall, released after 1800 years from the drain.

Then a very Butrint moment occurred. Kiço yelled uncharacteristically and the word went up….’snake!’. Harboured in the lower folds of the toga had been a viper. It could never have suspected the unexpected turn of events which led to Kiço madly dancing a jig in the confined space, grabbing a shovel, and destroying the creature in a fitful frenzy. It brought to mind the account of how the Albanian dictator, Enver Hoxha, when Nikita Khruschchev visited Butrint in 1959, had armies of beaters seeking and destroying the snakes in case one might kill the Soviet. The mangled corpses were then hung out for the puzzled Khrushchev to admire.

Next, the statue was swung onto a steep, angled barrow run, placed before the trench end. This was the magic moment. Everyone, emerging from everywhere, was suddenly in on the event – pushing, pulling the figure up. Along with the workmen there was the Vice-Director of the Institute of Archaeology, his straw trilby slightly cocked as he pushed; there was our driver, who had heard the ruckus and joined in, his tattooed arms pumping at the plinth; and in there heaving too was the smartly dressed local tourist agent, who happened to be passing, with 50 or more sweating Germans. Kiço calmly commanded them all and for five minutes, like an old-fashioned village tug-of-war, the statue resisted until the combination of forces all mucking in together beached the handsome creature on the pathway. All the time, the excavators marvelled, hearts in their mouths, while the lines of German onlookers entreated us to get out of the way as digital flashes illuminated the ensemble in the midday sun. Then, in a flash it was over, and bound in the frayed ties, the togate was removed, and today sits proudly on its own plinth in the atrium of Butrint’s new museum. It seems forlorn after such excitement, but, then, trophy art is, I will always explain through gritted teeth, nowhere near as exciting as those moments when people encounter the past and practise magic.