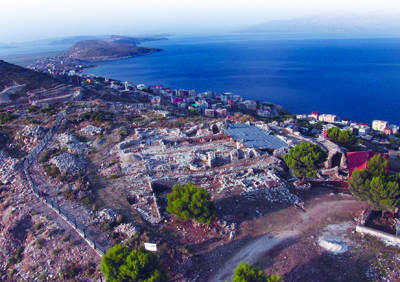 Today the Forty Saints sits discreetly above the crowded bay of Saranda (Hagioi Saranta), in southern Albania, overshadowed by telephone aerials. Enter the arcing harbour and your eye is drawn to a melée of small boys plunging into the water, little sun-tanned minxes in an otherwise sleepy, almost dreamy, tourist town. Saranda’s ancient history, when it was Onchesmos, is barely visible. The little walled Roman port where Cicero took ship for Brindisi after holidaying with his friend Titus Pomponius Atticus lies below a forest of new buildings. Only a section of the later city wall, belonging to the 5th century, and the remains of a late Roman synagogue next to it, remind visitors that Onchesmos was once a place associated with Aeneas’s flight from Troy, taking its name from his aged father, Anchises.

According to Dionysius of Halicarnassus, there was a great temple here, dedicated to Aphrodite, but no trace of it has been found. If it existed, the most likely spot would not be close to the narrow beach, but high on the shoulder of the steep hill that forms the backdrop for the great bowl, which, until very recently, contained Saranda. My guess – and it is a guess – is that the temple lies beneath the huge monument that gave its name to Saranda from the age of the Crusades until now: the church of the Forty Saints (Santa Quaranta).

To reach the Forty Saints, you must ascend the long hill leaving Saranda for Gjirokastra, and then follow the labyrinth of ill-made roads through a dishevelled suburb out onto the unkempt rump of the hill. Today the monument is fenced, but the gate is never closed. Press on to the edge of the hill and then experience one of the most satisfying moments to be had in the Mediterranean. Here is a peerless panorama. Below lies Saranda, of course, squatting in the bay; to the right, as if in a huge plastic diorama, flows the glittering Straits of Corfu, with the upper half of Corfu crystal sharp to the eye. ‘Corfu lies like a sickle beside the flanks of the mainland,’ Lawrence Durrell reminds us in The Greek Islands, ‘forming a great calm bay, which narrows at both ends so that the tides are squeezed and calmed as they pass it.’

To the left of this celebrated island, immediately to your south, at the end of a meandering peninsula, lies Butrint, ancient Buthrotum, tucked behind Lake Butrint. Inland, occupying the foreground before the steep wall of mountains, is a long saddle-backed hill, the Phoinike – according to Polybius, the richest town in this region in Hellenistic times. The sublime pleasure of this breathtaking view is enhanced by the gentle breeze carrying the sea-blown aromas of the hillside, a heady blend of thyme, jasmine, and broom.

In late Antiquity, judging from the scale of the remains, the Forty Saints must have been a holy place of some significance – the architectural vision, we might assume, of an accomplished Holy Man in the late Roman world. Luigi Maria Ugolini (the excavator associated with Butrint), who studied the building in the mid 1920s, refers to it as probably the finest of all the churches that he had seen during his travels in Albania. It is certainly the largest basilica of its kind in the region, ranking alongside the episcopal churches at Nikopolis, 100km to the south in Greece.