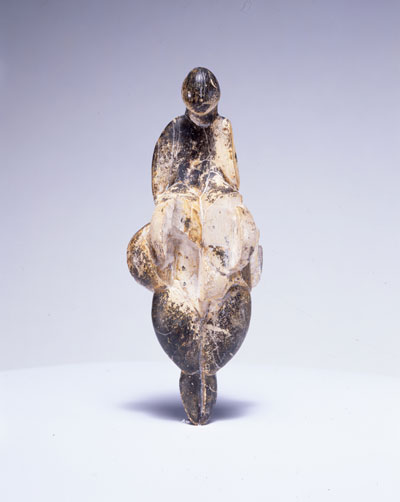 The modern mind
The British Museum’s (superb) current exhibition is called ‘Ice Age Art’ – though some say it might be more accurate to call it Upper Palaeolithic Interstadial (Warm Period) Art, but you can see why they went for a title with a bit more pizzazz. To promote the exhibition, the BM has a snazzy website video showing prehistoric sculpture swimming around inside a brain full of sizzling and sparking electrical impulses, ending in a punchy slogan: ‘the arrival of the modern mind’.

What exactly is this modern mind? Apparently, creativity takes place in the frontal lobe of the brain and somehow this is supposed to have ‘arrived’, like the 09.25 train from Paris, around 40,000 years ago, when many of the exhibits in the exhibition were made. Such a pity that it simply isn’t true. Scientists no longer believe that we humans are alone in having a big frontal lobe; that is something we have in common with all the great apes. In other words, it is not size that matters, but what you do with your big brain. As for the watershed in human cognition, much depends on how you define the modern mind. But the evidence from numerous cave sites in Africa points to symbolic behaviour, jewellery, religion, the burial of the dead, and the desire to explore and see what lies beyond the horizon as all being in place at least 110,000 years ago, if not well before.

Cubist inspiration?
The exhibition also claims that artists such as Picasso were influenced by such prehistoric carvings as the ‘Cubist’ Venus of Lespugue. That can hardly be the case when that Venus was discovered in 1922, while Picasso’s Cubist period, ushered in by Les Demoiselles d’Avignon (originally titled The Brothel of Avignon because it portrays five denizens of that establishment), dates from 1907. His biography suggests that Cubism was inspired by African and Oceanic masks in what is now the MusÈe de l’Homme. Cubism was old hat and Picasso had moved on when the Lespugue Venus was found.

Picasso did, though, greatly admire this figurine, calling it ‘goddess of fecundity, the quintessence of female form, whose flesh seems to swell and grow from around a kernel’. He also made the acute observation that most recent African art is made of wood, not stone, clay or ivory, and that this was probably true in prehistory as well: the ‘Stone Age’ should probably be called the ‘Wood Age’. If the wonderful prehistoric carving in the British Museum exhibition appears to have sprung fully formed and accomplished out of nowhere, that is because we have probably lost all the sculpture that went before, in wood, leather, cloth, grass, wax, and unfired clay. Perhaps, then, the apparent florescence of art 40,000 years ago marks not the start of artistic creativity, but simply the first art in stone, ivory, and bone.

Don’t get me wrong: this is a brilliant exhibition: the objects in it are fascinating. Just go and look and enjoy and ask all sorts of questions – but don’t look to the labels or the catalogue for reliable answers.

Is it even art?
The exhibition also juxtaposes prehistoric sculpture with modern art and makes much of the similarities, suggesting that prehistoric ‘artists’ were a class apart, excused other cave duties so that they could ‘spend many hours creating sculptures, drawings and paintings’, and that this ‘investment in art is a measure of its social value’.

Terms like ‘art’, ‘artist’, and ‘investment’ impose modern concepts on the past, and get in the way of much more interesting questions, such as why the figure of a pregnant female, or one who has borne many children, occurs again and again in different cultures (there is a whole room full of them in the BM exhibition), separated by thousands of years, with no possibility of continuity one to the next? Most of the other sculptures in the exhibition are of food animals. What does this selective focus of fertility and food tell us, and why were so many of the exhibits deliberately broken soon after they were made? And why are there no male figures or phallic sculptures? Does it suggest that there was no understanding of the man’s biological role in creating babies? Perhaps pregnancy was attributed to some other cause (such as making, breaking, and burying pregnancy figurines).

Penis or pestle?
Of the few prehistoric sculptures that have been called phallic in the past, a whole class of objects has just been shown to be nothing of the kind, thanks to Professor Naama Goren-Inbar, of the Institute of Archaeology, Hebrew University of Jerusalem, and her team. They have studied a series of cylindrical objects of stone or clay commonly found on Near Eastern Pottery Neolithic sites of the first half of the 8th millennium BC. These are frequently described in excavation reports as ‘cultic objects in the shape of phalli’, or as ‘clay pestles’. Now we discover that they are just plain matches. The authors of the paper in the journal PLOS One describe them as ‘components of fire drills and the earliest evidence of a complex technology of fire ignition, which incorporates the cylindrical objects in the role of matches’.

They have also reinterpreted so-called ‘gaming boards’ from the same sites as firepans. The phallic drill bit was placed into a socket in the limestone pan and rotated at speed, generating sparks and setting fire to combustible material heaped in a shallow depression around the socket. Proof of this theory is found in the characteristic rotational striations found around the tips of the drill bits, and the darkening of the tip from the heat generated. It all gives a new meaning to the Doors’ classic ‘C’mon baby light my fire’.

Girl power
If roles in prehistoric society were split along gender lines, is it not likely that women were the sculptors? After all, they probably had the time to sit and carve, especially if they were pregnant and less mobile, while the men went out looking for food. Proof that craft was not an exclusively male preserve in the past comes from a 4,000-year-old Bronze Age grave excavated near Geitzendorf, north-west of Vienna (see CWA 56, News). Here the grave goods included an anvil, hammers, and flint chisels, as well as some small items of dress jewellery. To the surprise of museum expert Ernst Lauermann, who led the examination of the grave, the bones associated with the tools turned out to be those of a woman aged between 45 and 60 at death.

Such a find would not in the least surprise Marianne Moen, author of The Gendered Landscape, who argues that we too often assume that men were ranked above women in ancient societies. As an example, she quotes traditional interpretations of Norway’s Oseberg boat burial which, when excavated in 1904, was found to contain two female skeletons, rather than the anticipated king or male warrior.

At the time, everyone searched around for a likely candidate and said this must be the grave of the queen Åsa (c.AD 785-850) and her servant, mentioned in the Ynglinga Saga. That proved to be impossible when the ship burial was subsequently carbon-dated to c.AD 834. But, says Moen, everyone is still trying to find alternative candidates in terms that imply that the significance of these two women lies in who they married or who they mothered. ‘Why can’t these be women who were powerful in their own right?’, she asks.

In the Kaupang area of Norway that Moen has studied, female graves are located side by side with male graves – and are just as prominent. Moen says that Norwegian national identity, forged in the 19th century, imposed on Viking society the ideas then current that women belonged to the domestic sphere and men to the public realm. The archaeological evidence suggests that Viking society was much more egalitarian.

Keeping stolen goods?
Another piece of evidence in support of gender equality in Viking society is a rather nice golden chest on display in the National Museum of Denmark, with the words ‘Ranvaik owns this shrine’ scratched on the base. Except that she didn’t: the chest was stolen by a Viking raider from a church or a monastery in Ireland or Scotland toward the end of the 8th century, and presented to Ranvaik as proof of his prowess.

This is but one example of the huge amount of ecclesiastical material (including crosiers, patens, and chalices) found in Danish soil that was clearly looted in the raids that made the Vikings a feared and hated force in the early Medieval world. Given the trend among museums to give back objects taken forcibly from other people and cultures – material that often had an important religious and symbolic function in the society from which it was seized – the question arises, shouldn’t the National Museum be making an effort to give this material back?

That is not very likely, but Danish museums are very generous in lending material to overseas museums. Coming soon to Britain is Roskilde 6, the fastest, sleekest, and biggest Viking ship ever found, one whose arrival on foreign shores manned by a crew of bloodthirsty marauders usually meant imminent disaster. On this occasion its arrival by lorry and container will signal a happier event: the inaugural exhibition at the British Museum’s new exhibition centre, currently still under construction, which will feature Viking finds from across Scandinavia when it opens in 2014.