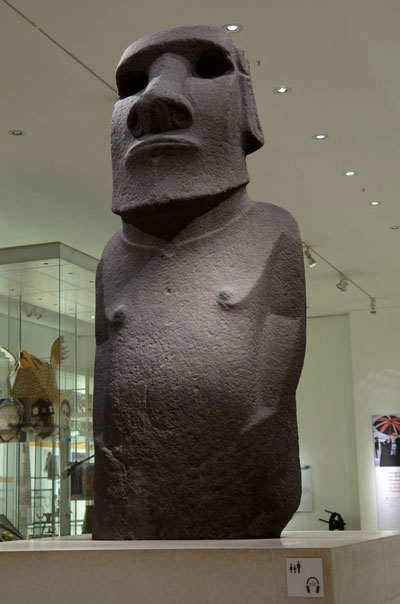 Cutting-edge computer technology has shed new light on one of the enigmatic Easter Island statues, revealing new details of the cult images decorating its back.

Hoa Hakananai’a – a stone head brought to England in 1869, now in the British Museum – has long been of interest to researchers because of its unusual, intricate carvings. These are thought to mark a change in religious beliefs on Easter Island when, in c.AD 1600, the islanders stopped worshipping their famous statues, and adopted a new cult centred around the ‘birdman’.

Some time after the statue was first carved, depictions of three bird-human hybrids, two large and one small, were added to Hoa Hakananai’a, covering its entire reverse. Now digital imaging has allowed archaeologists from the University of Southampton to examine these figures, illuminating the scene’s possible meaning.

The team’s analysis has revealed that the two large ‘birdmen’ have different shaped beaks, and that they are accompanied by gender-specific symbolism – small komari designs, representing female genitalia, and a paddle, associated with male authority – allowing them to be identified as different sexes. This suggests that the scene depicts two bird parents watching a chick leave the nest, the researchers say.

The study involved two techniques: Photogrammetic Modelling, in which hundreds of photographs taken from different angles were used to create a fully textured, 3D computer model of the statue, capable of being rotated 360 degrees; and Reflectance Transformation Imaging, in which a virtual light source is moved across the surface of a digital image of the statue, using the difference between light and shade to highlight previously unnoticed details.

This close examination has also revealed new information about the structure of the statue, suggesting that, unlike many of the other Easter Island heads, it had never stood on a platform but had been carved directly from the rocky outcrop where it was found in 1869. By studying the statue’s base, the team concluded that its tapered form was more likely to be a feature of the boulder from which it was created than a sign of it being altered to fit into a pit.

‘The Hoa Hakananai’a statue has rarely been studied at first hand by archaeologists, but developments in digital imaging technology have now allowed us to examine it in unprecedented detail,’ said Dr Graeme Earl, from the University of Southampton’s Archaeological Computing Research Group.