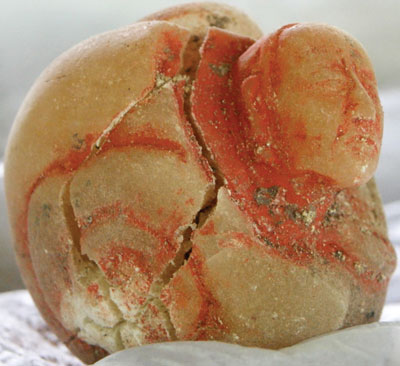 Archaeologists in Guatemala believe they may have uncovered the tomb of the 7th-century warrior queen K’abel, one of the great female rulers of Classic Maya civilisation.

The burial was discovered during excavations by a team from Washington University in St Louis investigating the Maya city of El Perú-Waka, about 75km (47 miles) from Tikal.

Interred beneath a series of shrines on the staircase of the site’s main temple, the remains of a mature individual were found surrounded by prestigious grave goods including figurines of gods, ceramic vessels dated to the first half of the 8th century, and large amounts of jade jewellery.

Deterioration of the remains made it hard to say conclusively whether the individual was male or female, but a clue was provided by a large red spiny oyster shell found on their lower torso. Late Classic queens are often depicted wearing such shells as girdle ornaments, while kings are not.

The key find, however, was a small alabaster jar shaped like a white conch with the head and arm of an elderly woman emerging from it. This was inscribed with four glyphs including the titles ‘Lady Waterlily-Hand’, ‘Lady Snake Lord’, and ‘Princess of Calakmul’ – all epithets associated with K’abel.

Considered the greatest ruler of the Late Classic period, K’abel was a member of the imperial Kan (Snake) dynasty. She married a vassal king, K’inich Bahlam II of the Wak (Centipede) kingdom, to help consolidate her father’s empire, and as Kaloomte (‘Supreme Warrior’), she was the Wak kingdom’s military governor, outranking her husband, with whom she ruled for at least 20 years (c.AD 672-692).

Project co-director Professor David Freidel said: ‘She was not only a queen, but a supreme warlord, and that made her the most powerful person in the kingdom during her lifetime.’

The El Perú-Waka Regional Archaeological Project has been working on the site since 2003. This year’s excavation set out to clear and define the architecture of the main temple’s stairway, and to establish its phases of construction. The team were also interested to find out why the temple had continued to be venerated following the fall of the dynasty. Professor Friedel said with this discovery, they might now understand the likely reason: K’abel was buried there.

‘It was a strong working hypothesis that the burial was K’abel’s tomb,’ he said. ‘Nothing is ever proven in archaeology as we are working with circumstantial evidence, but this is as close to a smoking gun as we can get.’

He added: ‘It is possible that this was a later queen who had the item as an heirloom from K’abel, but until we find a candidate for K’abel that is better, this is an especially good one.’