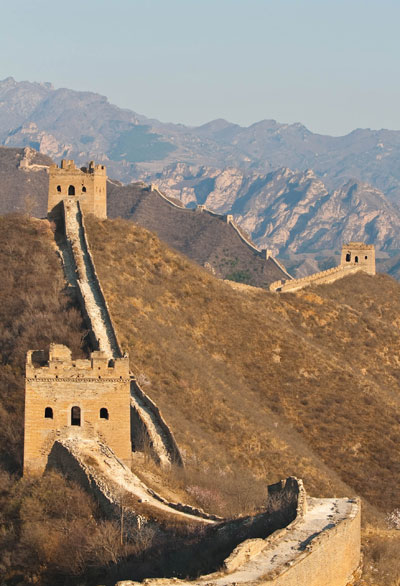 Decline and Fall
Edward Gibbon wrote an epic six-volume History of the Decline and Fall of the Roman Empire in 1776-1789, in which he blamed the Church for the end of the glory that was Rome. The impact of the teachings of the Church, he argued, was to make Romans effeminate so that they avoided the soldier’s tough life: ‘the active virtues of society were discouraged,’ he wrote, ‘and the last remains of military spirit were buried in the cloister: a large portion of public and private wealth was consecrated to the specious demands of charity and devotion; and the soldiers’ pay was lavished on the useless multitudes of both sexes who could only plead the merits of abstinence and chastity.’

Strong stuff, and still worth reading for that brilliantly aphoristic style. Another juicily moralistic truism from the same pen was Gibbon’s conclusion that history is ‘little more than the register of the crimes, follies, and misfortune of mankind’. And yet, for all his research in primary sources (for which he is often called the first modern historian) and his penetrating analysis, he might have saved himself the bother; ever since Rudolf Kobert published his paper in a German journal in 1909, it has been widely held that the Roman fondness for bathing and water, delivered by means of lead pipes, was what really brought the empire down. The defining feature of Roman civilisation – fresh water on demand – slowly poisoned all those manly Romans living in their fine cities and towns, leaving the unwashed rural bumpkins and the barbarians to inherit the earth.

New research suggests that use of lead was not restricted to water pipes and aqueduct linings, however. Grape juice boiled to half its volume was used by Roman cooks to make a sweet food additive called defrutum; reducing the volume by two-thirds created the even sweeter and more viscous sapa. The result was better still if lead-lined vessels were used, as recommended by Columella, a Roman winemaker, and Apicius, the late 4th-century Roman cook. This is because acetic acid reacts with lead oxide to produce lead acetate, widely used as a gastronomic sweetener, though now recognised to be toxic and to have caused the death of Pope Clement II (in 1047) and Beethoven (1827), among others.

So what is the truth: religion or lead? Bioarchaeologist Kristina Killgrove, of the Department of Anthropology at the University of North Carolina, and Janet Montgomery, Senior Lecturer in the Department of Archaeology at Durham University, have compared lead levels in human remains from cemeteries in Rome and from British burials from the Neolithic to the late Medieval period. Sure enough, this shows that there is a clear and visible spike in lead levels in Britain during the Romano-British period, and that in Rome itself, in the 1st to 3rd centuries, lead levels soar to three times higher than the World Health Organisation’s definition of severe lead poisoning.

Nothing in archaeology is simple, and the authors of this study are not prepared to go as far as blaming lead for the empire’s fall: all it shows is that some people were exposed to dangerous levels of lead – the data do not tell us why (they might have worked in an environment where lead levels were especially high) or how widespread this was. So the arguments can continue: though Gibbon himself was not fond of debate, on the grounds that ‘it is a mistake to argue with people for whose opinions you have no respect’.

Iron Age biker chic
Another way of looking at the problem is to ask whether the barbarians won in the end because beer was their favourite beverage, rather than southern wine. Recent excavations at the 2,600-year-old Heuneburg hillfort in the south-west German state of Baden-Wurttemberg have uncovered evidence for what the excavator, Bettina Arnold, of the Department of Anthropology, University of Wisconsin-Milwaukee, calls ‘competitive feasting’. Those who aspired to social and political status in Iron Age society curried favour by throwing ‘all you can eat and drink’ parties. The debris from these feasts suggest that wheat and barley beer were consumed in prodigious quantities, judging by the size of the beer cauldrons, and of the drinking horns – some of them capable of holding more than a gallon of liquid.

In addition to a fondness for beer, the Heuneburg dig has yielded evidence of a love of flashy dress and ornamentation. Blocks of earth were encased in plaster and lifted intact from the site for laboratory analysis. Putting them through a CT scanner revealed evidence for ‘fabulous leather belts with thousands of tiny bronze staples attached to the leather that would have taken hours to make… I call them the Iron Age Harley-Davidson biker chicks,’ Bettina Arnold says. As for effeminacy, these Celts were not having any of that. Yes, they all wore jewellery, but it was gender-specific: bracelets worn on the left arm were only found in men’s graves, while neck rings and bracelets worn on both arms were only found in the graves of women.

Viking mice
The Vikings were a pretty manly lot, if by manliness you mean raiding English and Irish monasteries, but in recent years it has become fashionable to de-emphasise the warrior elements in Viking culture and look instead at their blameless lives as craftsmen and traders, founders of such cities as Dublin and York. Now, however, we can again blame the Vikings for something really nasty: apparently the house mice of Iceland and Greenland can be traced genetically to ancestors who arrived in Viking longboats from Norway or the northern British Isles in the 10th century.

Dr Eleanor Jones, of the University of York, has compared the mitochondrial DNA from ancient mouse bones found at nine archaeological sites with that from modern mice. Like their human counterparts in Iceland, who are descended from settlers primarily of Norwegian, Irish, and Scottish origin, so the island’s mice ‘retain the signature of the ancestral house mouse founders’ who hid on board Viking longboats along with the horses and sheep that were also on board. No trace of Norse mice genes could be found in Newfoundland, however, even though the island was visited by Leif Eriksson in the 11th century: perhaps Leif kept a cat.

Marco Polo in China?
For longer even than people have been arguing about the role of lead poisoning in
the demise of Rome, so they have been debating whether Marco Polo (1254-1324) really did go to China or whether he simply sat in a Black Sea resort, writing his famous travelogue on the basis of stories told by merchants and the contents of long-lost Persian books. New research on salt production in China by Hans Ulrich Vogel of the University of T¸bingen has recently come down on Marco Polo’s side, by demonstrating that his descriptions of currency, salt production, and revenues from the imperial salt monopoly contain accurate and unique details about the currency situation in Mongol China that no other Western, Arab, or Persian observer reported. Polo is the only traveller to describe the widespread use of paper money in official and private transactions, how paper for money was made from the bark of the mulberry tree, the shape and size of the paper used for various denominations, the punishments for counterfeiters, and the 3 per cent fee charged by the state for exchanging worn-out notes.

He is also alone in stating that paper money was primarily used in the north and in the regions along the Yangtze, but not in Fujian, nor in Yunnan, where, according to Polo, cowries, salt, gold, and silver were the main currencies. Chinese sources confirming this were translated long after Marco Polo’s time, so he could not have drawn on them. This and many other small details to do with salt production and taxation in China lead Professor Vogel to conclude that Polo knew what he was talking about.

China’s Great Walls
One reason why sceptics doubt whether Marco Polo went to China was his ‘failure’ to mention the Great Wall. Perhaps this is because the Great Wall of popular imagination did not exist in Polo’s day; the switchback wall, with its grey brick fortifications, that is one of modern China’s most popular tourist destinations was not built until the Ming Dynasty (1368-1644). Surprisingly little was known at all about the Wall, in fact, until 2007, when the State Administration of Culture and Heritage in China sent teams of surveyors to 15 Chinese provinces with instructions to find and map every trace of wall and fortification they could find.

Five years on, the history books are being rewritten: the results show that the Great Wall of China should in future be referred to as the Great Walls, since they consist of a series of often overlapping defensive fortifications, some brick and others of packed earth, built over the course of nearly 2,000 years and 13 dynasties, beginning with the first Wall, built for the first Qin emperor (221-206 BC). The Walls once stretched for 13,173 miles (twice as long as previous estimates), of which about 5,500 miles have survived. Even that is a headache for heritage officials in China, given that it includes a total of 43,721 designated heritage sites: of the Ming Dynasty wall, only 8 per cent survives, and three-quarters of that is said to be in a poor condition.