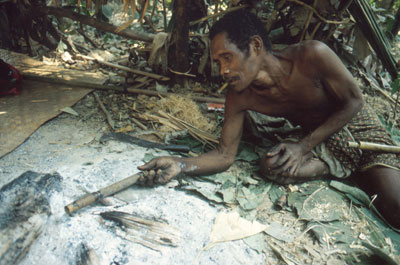 When did our ancestors leave Africa to colonise the globe?

Our cottage in Ashwell looks out over the village church, which boasts the highest parish steeple in Hertfordshire. A glance over the churchyard one wet May morning revealed a van drawn up, and familiar gear being off-loaded: picks and shovels, tarpaulins and sieves. All the hallmarks of an impending dig. Soon, half a dozen young diggers were laying out a square just over the boundary in the rectory garden, so I sauntered across to see what was going on.
A schoolboy was enthusiastically digging into the topsoil; others were filling buckets, and taking the spoil to be screened. ‘What are you after,’ I asked. Neolithic and Bronze Age was his answer. As the day wore on I returned to find them a foot deeper and through the garden soil into layer two, which was distinctly chalky. Jessica Rippengal, from Cambridge University, told me the programme was giving young would-be archaeologists the opportunity to explore village histories.

This took me back to my own first dig. My uncle spent much of his spare time investigating Wimbledon House, a stately Tudor mansion that looked out over extensive grounds graced with a large lake, bounded today by the tennis courts of the All England Club. Once occupied by Queen Henrietta Maria, wife of Charles I, it has long since been razed to the ground. Based on surviving plans, Uncle Strachan wanted to excavate to find the corner wall of the orangery, which would allow him to place the rest of the palace in its correct location.

So, my older brother and I dug in his chosen spot; in due course, and with great excitement, we found Tudor bricks that formed a nice right-angled corner.
Our appetites whetted, we next volunteered to join Nicholas and Charles Thomas’s excavation of a Bronze Age round barrow at Snail Down, Wiltshire. Our enthusiasm progressed to Palaeolithic caves at Arcy-sur-Cure in France, Bignor Roman Villa, and Verulamium. I hope that some of the young people in Ashwell will continue to enjoy their digging in the same way. And it strikes me how much our discipline has changed since we found that Tudor wall.

Modern hunter-gatherers
In September, a meeting in Paris will be exploring the origin of the so-called ‘negritos’ of South-east Asia, and I am preparing one of the presentations. Several surviving groups of hunter-gatherers have retreated to remote, forested refugia to avoid the impact of lowland rice-farmers and the trappings of civilisation. There are the Semang and Mani in the borderland between Malaysia and Thailand, and the Aeta of the Philippines. But to me, the most intriguing are the Sentinelese.

Sentinel Island is part of the Andaman chain, and is occupied by a group of negrito hunter-gatherers so ferocious that they are virtually unknown. When an Indian helicopter flew over the island to check for signs of human life following the 2004 tsunami, it was fired on by armed men hurling stones and firing arrows. Six years ago, two fishermen were killed when their boat drifted onto the island.

Investigating their origins is a test case in the astonishing developments in prehistoric research that have taken place in one brief career. Digging is now one of many strands, but in the case of the negritos, archaeological enquiry is debilitated by the sharp rise in the sea level that, over the past 10,000 years, has inundated Sundaland, an area the size of India. This rules out research into the coastal adaptation of prehistoric hunter-gatherers, and thus archaeology on the Andaman chain only has a time depth of about four millennia before the trail goes cold.

On the mainland of South-east Asia, there are many rock-shelter sites that provide evidence of occupation back to about 35,000 years, but the patterns of coastal adaptations are silent for this long period.

New approaches
Now, with the emerging discipline of archaeogenetics, we have entered a new world of enquiry: its specialists have already sliced through old and hoary debates on human origins with results that Peter Underwood once described as ‘bullet proof’. We no longer trawl through the conflicting evidence for multiple origins for anatomically modern humans across Eurasia: the DNA evidence favours a single exodus out of Africa, and an initial rapid expansion along the warm coastline of India into South-east Asia and Australia.

How, then, might archaeogenetics contribute to the puzzle of the negritos? The base lineage at the time of the expansion of our ancestors out of Africa is known as L3. This was the ancestor of all subsequent mutations, one of the earliest of which led to the formation of lineage M. The high proportion of M in the Semang negritos of Malaysia reveals their close relationship with the intrepid modern humans who explored and settled South-east Asia. But how long ago did this occur?

Here we enter an opaque area because there is no doubt that it lies beyond the reach of radiocarbon dating, and, in any case, there are no human remains to try to date. However, Pedro Soares and his colleagues have recently so refined the so-called molecular clock that at least a range of dates can be identified.
We see that mutations not found in Africa began to evolve between 60,000 and 80,000 years ago. Thus, we can determine that the Semang and the Mani reached their present negrito appearance after an astonishing 240,000 generations.

Only three linguistic groups of Andamanese survive: the Jarawa, Sentinelese, and Onge. Their dominant M32 lineage also supports an early movement out of Africa, although their languages are so different that they must have been isolated from each other for a considerable length of time.

The span of 60,000-80,000 years derived from the genetic clock brings me to one of those active debates that so energises our subject of archaeology.

About 74,000 years ago, there was a colossal volcanic eruption on the island of Sumatra. Toba blew its top and catapulted thousands of cubic kilometres of ash and rock skyward. In the Jerreru Valley of India, excavations have uncovered stone tools lying below this layer of ash. In a recent issue of Nature, Tim Appenzeller outlined a new controversy that, like the Boat Race, pits experts from Oxford against Cambridge.

In the dark-blue corner, Michael Petraglia holds that the stone tools were made by Anatomically Modern Humans (AMH) who moved out of Africa possibly as early as 125,000 years ago, well before Toba erupted. The light blues are led by Paul Mellars, who is a strong protagonist for a rapid ‘express train’ exodus after Toba. Resolving this debate will answer one of the great questions of the human past: when did our ancestors leave Africa to colonise the globe, encountering en route their distant Neanderthal cousins, and also the descendants of Homo erectus: the mysterious hobbits of Flores, and now, thanks to more archaeogenetic insights, the new Denisovans?

The answer will surely come, ultimately, from archaeological fieldwork and the lucky find of human remains dated to the millennia before and after Toba. So, archaeology still has a central role to play – and sooner or later, one of the two protagonists will have to give way.

Update on Ban Chiang
Several readers have been in touch asking me if Joyce White has yet responded to my challenge to give us her views and debate the chronology of the Bronze Age at the World Heritage Site Ban Chiang and in South-east Asia as a whole. I am waiting to hear back.