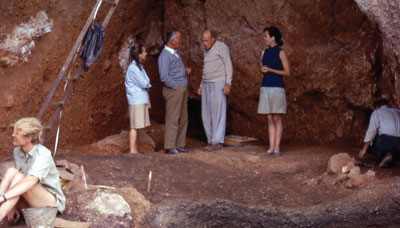 Imagine being played a DVD of Charles Darwin, Thomas Huxley, and Alfred Russell Wallace discussing their views on evolution, or Boucher de Perthes, Dean Buckland, and William Pengelly describing their approach to the early human occupation of Europe. This is, of course, impossible: their inner thoughts are sadly consigned to oblivion, and only the carefully crafted, printed word remains to reflect their ideas.

Now, thanks to the far-sighted vision and sheer hard work of Pamela Jane Smith, future students of archaeology will be able to absorb the spoken word directly from those who pioneered their particular branches of the discipline. For several years, she has been cornering both the now-elderly residents of Cambridge and visitors to the Department there, to record their recollections of seminal moments as they recall them.

Typically, such a session might last about an hour, while Pamela Jane, with her small recorder discreetly playing, probes and prompts them to describe things as they actually were. ‘Tell me about Grahame Clark,’ she might say. And memories flood back of my first term in Cambridge in 1959: Grahame in all his noted austerity would walk into the lecture room fully gowned, signal for us to sit down, and we would then listen to his latest interest – which was almost invariably an arcane discovery of the Scandinavian Mesolithic, or the latest interpretation of the antler frontlets from Star Carr. In the second year, a newcomer joined us from Natural Sciences: Colin Renfrew.

Next, Pamela Jane would turn my thoughts to Eric Higgs, my principal mentor, who has shaped my career in archaeology more than any other. How can one describe his contribution without giving some background on the sort of man he was? So I recall his piercing blue eyes, and a confidential manner that would give me the impression I was the only person who mattered.

These interviews have now taken a natural further step within Pamela Jane’s Personal Histories Project, for she has been assembling groups of pioneers to present their views regularly to large and enthusiastic audiences of undergraduates – and, indeed, anyone who might be interested – and these recordings are made available on the internet.

A royal send-off
I left Cambridge in late 1967 for the world’s most remote Department of Archaeology in southern New Zealand, so many aspects of the meetings and discussions covered by these recordings are novel to me. Take, for example, the beginnings of what we now term ‘the New Archaeology’. One of the sessions was entitled: An oral history
of the New Archaeology of the 1960s with Colin Renfrew, Mike Schiffer, Ezra Zubrow, Graeme Barker, Robin Dennell, Rob Foley, Paul Mellars and Marek Zvelebil. I find it particularly fascinating to revisit this moment when we crossed the Rubicon from the old approach of typology and migrations, already fraying under the impact of the first trickle of radiocarbon dates – it is just a shame the late Lewis Binford was not here to be included. If you want to watch the proceedings yourself, visit http://sms.cam.ac.uk/media/1080569.

One little piece of my own personal history takes me back to the meetings of the Cambridge Archaeological Field Club, a student club that invited visiting luminaries to take tea, followed by a lecture. Members of the committee would then join the speaker for dinner. On one occasion, Louis Leakey was ushered in by Grahame Clark. ‘Ah,’ said Grahame, ‘Leakey is looking for an assistant to work with him in Africa. Anyone interested?’ We all looked away, far more interested in Wessex round barrows, and surely, isn’t Africa full of snakes and lions? All that is, but one, Glyn Isaac, who stepped forward and within a matter of months, was digging at Olorgesailie.

Another of Pamela Jane’s meetings, this time an oral history of primatology at Cambridge, featured Jane Goodall (pictured right), Robert Hinde, William McGrew, and Richard Wrangham. For one raised on Kenneth Oakley’s Man the Toolmaker, seeing the chimpanzees become closer and closer kin – both behaviourally and genetically approaching the rank of first cousins – is due in large measure to the work of the participants, and this, too, deserves an Oscar: www.cu-tv.co.uk/ node/141; www.cu-tv.co.uk/node/142.

An oral history of the Institute of Archaeology will also soon be online: in October 1957, the Government of the day announced the end of National Service. I missed out on two years in the Army by 19 days.

It presented my parents with the dilemma of what to do with me in the years that yawned ahead before going up to Cambridge. They discovered a two-year postgraduate Diploma in Archaeology at the Institute, and the new director, Peter Grimes, could find no reason why I should not enrol. I chose Roman Archaeology, since I would not be doing that at Cambridge, and found myself one of two postgraduate students under Sheppard Frere.

I recall the days at the old Institute in St John’s Lodge, Regent’s Park, with great nostalgia. Mortimer Wheeler was regularly seen, and Kathleen Kenyon, Freddie Zeuner, and Max Mallowan were on the staff. The tea room was wonderfully egalitarian, and I was sitting at the same table as Kathleen Kenyon when an incredibly aged lady came into the room. ‘Who is that?’, I asked. ‘Margaret Murray, she dug with Flinders Petrie at Abydos,’ came the answer. I felt as if I was in touch with the origins of the discipline.
In 1958, we moved to the new building in Gordon Square, and I was on deck in the conservation laboratory when HM The Queen Mother came for the official opening. We were briefed in advance to address her as ‘Ma’am’, and not to engage her in conversation. I was poring over some Roman iron when she came into the lab, looking radiant, and followed by a posse of top brass. She came straight up to me. ‘What are you doing?’ she enquired. ‘Restoring some Roman iron, ma’am,’ came my response. ‘Aren’t the trees looking lovely in Gordon Square?’ she sought my opinion. ‘Indeed they are, ma’am,’ came my dutifully clipped response. She left, still radiant, and showing about as much interest in Roman iron as I had.

I am taking part in another oral history meeting, on The Bone Room’s Past: Revolution in Palaeoeconomic Studies, along with several others attracted by Eric Higgs’ charisma and confidence. To maintain the momentum of this series of meetings, a sponsor with a spare £6,000 is needed. Any offers?