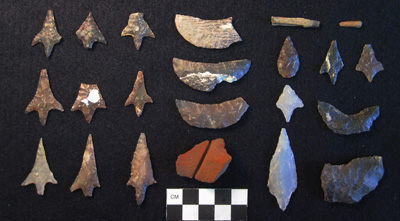 The lure of chocolate

Hi-tech archaeology triumphs again! Now it shows we are not the first societies to be ardent chocoholics. As I reported in an earlier column (CWA 35), two years ago archaeologists working at Chaco Canyon in the Southwest found traces of cacao residue on pots from the ‘great house’ known as Pueblo Bonito.

Now, Dorothy Washburn, of the University of Pennsylvania, has expanded the study and shown that large numbers of people throughout ancestral Southwestern society consumed beverages made of cacao. Washburn and her colleagues identified theobromine, a chemical found in cacao plants in 50 of 75 vessels from various locations at Pueblo Bonito, as well as in surrounding farming villages and in graves of high-ranking Hohokam individuals buried in southern Arizona during in the 14th century AD. The cacao came from far south in Mexico, perhaps traded for New Mexican turquoise, which is of higher quality than that in Mesoamerica, having been found as far away as Chichén Itzá in the Yucatán.

We have known for years that there were contacts between Mesoamerican civilizations and the Southwest, but it is only now that the full extent of these contacts is coming into focus.

Mark Leone of the University of Maryland is well known for his innovative excavations in Annapolis and its environs. He has just uncovered fascinating evidence of enslaved African-Americans’ involvement in the Orangery at Wye Plantation on Maryland’s Eastern Shore. The Wye Orangery is the only 18th-century greenhouse in North America – store this tidbit away in your file of esoteric information!

Leone unearthed an African symbol placed in the bricks of the furnace used to heat the greenhouse. His team also found African charms, spirit offerings of a coin and arrowheads, buried at the entrance to the part of the greenhouse that served as slave living quarters, until recently assumed to be a potting shed.

Greenhouses like that at Wye involved agricultural and horticultural trials, much of it in the hands of the enslaved. They began experimenting at the Orangery with wild broccoli, Seneca snakeroot, ginger root for tea, and other vegetables both for consumption and medical purposes. Pollens excavated from the Orangery – a novelty in historical archaeology – indicate some of the plants grown there: citrus trees, roses, and a variety of flowering plants and shrubs.

The existing Orangery, which is still in use, stands on the foundations of an earlier one, built around 1770, then replaced by the present structure in 1784-1785. Magnetometers and ground penetrating radar led to the discovery of the underground remains of the earlier structure.

Did the first Americans colonise the Lower 48 (states of America) by land or sea? The traditional scenario argues for small-scale movements of terrestrial hunters across the dry land of the Bering Land Bridge between Siberia and Alaska around 15,000 years ago. In recent years, a maritime hypothesis has gained intellectual traction as an alternative, despite almost no evidence for very early seafaring down America’s West Coast. This is hardly surprising, given that sea levels have risen 70m to 90m or so since the last Ice Age, and the ancient coastline is underwater.

On the whole, it is a classic case of ‘you pays your money and you picks your choice’ for land or seaborne settlement. Most likely, there was a mix of both. Certainly, early Native American groups exploited the Southern California coast – witness traces of human occupation on Santa Rosa Island in the Santa Barbara Channel that date back at least 13,000 years.

Now, Jon Erlandson of the University of Oregon and others have unearthed 12,000-year-old occupation on the same island, which has yielded clear evidence for fishing, fowling, and sea mammal hunting at a very early date.
One site, near what was once a marshy area on the north coast, yielded fine-stemmed points and small crescent-shaped artefacts made from local chert. Both may have been used against waterfowl, among them geese and albatross. The small points, perhaps used for bird hunting, are quite unlike the ubiquitous Clovis points, with their fluted bases, on the mainland that are often taken to indicate early settlement.

Inshore fish bones abounded in the deposits, also some sea mammal remains, while inshore molluscs came from a series of middens some distance to the east.

These sites survive because they were well above the sea levels of 12,000 years ago. They provide convincing evidence that very early Native Americans exploited a wide variety of marine resources and travelled safely over distances of up to 20km over open water. But whether the inhabitants were seasonal visitors from the mainland or permanent residents remains to be seen. And the new sites, fascinating as they are, certainly do not add much to the endless debate about the first Americans.

Just as I was about to reveal, finally, the secret of Bismarck’s builder – awaited with breathless suspense by some of CWA’s readers – I learn that the workers responsible for the armament and other details have gone on strike. A long delay is expected! (Actually, the builder is frantically writing up field research.) Stay tuned . . .

Writing a column is a laborious, if interesting, task and this is the second time in my career that I have written one. But enough is enough, and it is time for me to move on to ventures new – our cats and rabbits call, and two book contracts await.

So this is goodbye for the moment, although I hope to write something for CWA occasionally. Thanks to you all for your enthusiastic notes and critiques, and to Nadia, then Matt, and their colleagues for their constant encouragement and enthusiasm. May the force of the past be with you! (And I promise to reveal all about Bismarck when the ship is launched.)