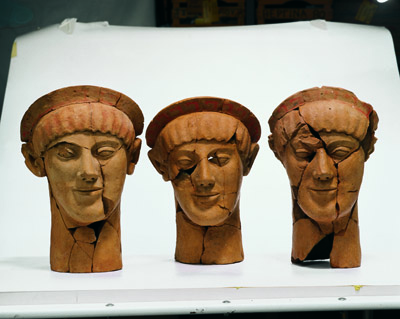 On 8 November 1977, Professor Manolis Andronikos made one of the great discoveries of the 20th century. He was excavating a huge mound on the plain of Aegae (the royal capital of ancient Macedon, modern-day Vergina), when he uncovered a very rich, untouched tomb. Could this be the tomb of Phillip II of Macedon, father of Alexander the Great?

Phillip was, in some ways, an even greater general than his distinguished son, for it was he who transformed Macedonia from one of Greece’s unsung northern fringes to the master of the Classical world, providing the launchpad for his son’s more spectacular exploits. But was this his tomb? The pottery dates to around 340-320 BC, and a distinctive irregular golden greave (shin pad) was found amongst the grave goods. Phillip is known to have broken his leg badly. The skull also preserved indications of an injury to the right eye – once again matching comments in the ancient sources that Phillip lost the sight of this due to a wound. This, and many other strands of evidence suggest that this is indeed Philip II’s resting place. Another tomb found nearby and under the Great Mound is now identified as belonging to the son of Alexander the Great, Alexander IV – the last of the Temenids, the ruling dynasty of Macedon since the middle of the 7th century BC.

This Summer, some 25 spectacular pieces from the tombs of Philip II and Alexander IV are coming to the Ashmolean Museum in Oxford for what promises to be one of the most spectacular shows of the season.

Featuring more than 500 objects, the vast majority put on display for the very first time anywhere in the world, this exhibition promises to put Alexander the Great and his family in greater perspective, and to tell the story from the first arrival of the Greeks from Argos in the 7th century BC. (It is, of course, quite untrue that there is any rivalry between the British Museum and their exhibition of Treasures from Afghanistan, and the Ashmolean Museum and the Treasures from Macedonia. It just so happens that both exhibitions cover two ends of Alexander’s empire. There is no contest, there is no rivalry, but may the best man win!)

The exhibition is divided into three parts: the first area looks at the role of the king in war, hunting, and as high-priest. The second area focuses on the royal women: as queens, princesses, and high-priestesses. The third area concentrates on the symposion (the royal banquet) and the royal palace. According to ancient tradition, a Macedonian could not recline at a banquet until he had killed a wild boar without using a net.

Most of the objects on display were excavated in the last 20 years by Dr Angeliki Kottaridi, Andronikos’s assistant and now Director of Antiquities, in the regions of Pella and Emathia for the Hellenic Ministry of Culture and Tourism. Dr Kottaridi’s work includes the excavation of the queen’s cluster – a group of very rich female burials. The ‘Lady of Aegae’ belongs to this group, and is the richest burial known from this period in Macedonia. She will be escorted by four bronze-clad ladies from Andronikos’s excavations of the vast early Iron Age tumuli cemetery (1000-700 BC), which comprises more than 500 burial mounds. Excavations are also continuing in the town itself, as well as the temple of Eukleia. Dedicated to the goddess of fair repute, Eukleia is an early example of the abstract-name deities who became so popular in the 1st and 2nd centuries AD.

Among the most recent tantalising finds from Aegae are the lifesize terracotta heads found buried with a queen or a lady of the court around 480 BC: although the female heads are stylised, some of the male heads have accentuated features that strike us with their realism and anticipate the Classical series of Roman portraiture packed with likenesses of the severe elderly men who made the Roman republic what it was. Their origins can be seen here in Greece, though these heads have at least a touch of the caricature about them, and recall some of the masks seen in classic Greek drama. Such over-the-top expressions seem well suited to gazing out over an exhibition of jaw-dropping treasures.