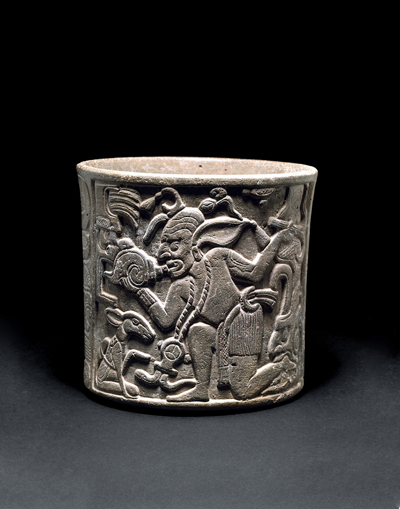 Southwest Texas is known for its rock art and its well-preserved cave and rock shelter deposits, which is why graduate student Samuel Belknap III and fellow student Robert Ingraham, both of the University of Maine, were studying ancient faecal samples from Hinds Cave near the Mexican border. Hinds was excavated during the 1970s, but the samples remained unstudied for a quarter century. This is probably just as well, for today’s analytical techniques are far more sophisticated than those of even a generation ago.

To their astonishment, the two students identified a fragment of dog bone in the sample, later radiocarbon dated to about 9,400 years ago. The bone formed the right occipital condyle, the area where the skull articulates with the backbone. Ingraham took the precious specimen to Harvard University’s Museum of Comparative Zoology, where he found a close match between the Hinds bone and those of a short-nosed Indian dog from New Mexico.

DNA tests carried out at the University of Oklahoma confirmed that the bone was from a domestic dog, rather than a wolf or other wild canine with their different genetic makeup. The bone is about 1.5cm long and 1cm across, so Belknap estimates the living dog weighed between 25 and 30 pounds.

Almost certainly, domestic dogs arrived from Eurasia during the first settlement of the Americas; but when, we have no idea. So far, the Hinds specimen is the earliest dated example from the Americas, although, of course, dogs were in use much earlier in Europe. This particular dog ended up in a cooking pot, for its remains survive in human faeces. The bands who visited Hinds may have valued dogs for hunting, for protection, and even as pets; but they also considered them food. This fascinating discovery is yet another reminder that some of the best archaeology comes not from trenches but from painstaking research back home in the laboratory.

Strombus, the conch, forms a natural trumpet, easily fashioned by cutting off the spine and grinding out a mouthpiece. Conch trumpets are part of humanity’s musical history. The Greek fish-tailed sea god Triton was said to control the waves by blowing his conch trumpet. An ancient Hindu text, the Bhagavad Gita (Song of God), describes how the Lord Krishna and the Prince Arjuna blew conch shell horns as they rode into battle, seated in a giant chariot pulled by white horses.

The ancient Maya considered conches sacred. The US Coast Guard even lists conch horns as a legitimate sound making device in its official Navigation Rules. Then there are the 20 Pacific conch trumpets recently excavated at the 3,000 year-old Chavín de Huantar shrine in the foothills of the Peruvian Andes. Chavín’s temple is a maze of subterranean tunnels, where water resonates through hidden defiles.

While an expert trumpet player blew, researchers recorded him with tiny microphones inside his mouth, the shell’s mouthpiece, and in the main body and opening. The effect was like a French horn, the pitch changing when the player put his hand inside the bell. By placing microphones inside the temple’s ceremonial chamber, they found the drone of the trumpet sounded as if it came from several directions simultaneously. The effect was a sense of droning confusion, which must have added to the sense of awe and supernatural fear. We forget that many of the great monuments of the past were settings for public ceremonies, where acoustic effects were part of the public theatre. We also fail to remember that places like the Parthenon, Tikal, and, for that matter, Chavín de Huantar were not only ablaze with bright, symbolic colours, but resonated with powerful sounds as well. We are finding that the past had powerful voices that are just as much part of the archaeological record as stone ruins.

The Maya called it K’ankh’ Nahb, the ‘Fiery Pool’, the shimmering realm of the ocean where the sun rose in the Caribbean and set in the Gulf of Mexico. The Fiery Pool in its elaborate radiance dominated much Maya thought and daily life. They believed that their world, the low-lying Yucatán Peninsula, floated like a turtle on the limitless waters of the Gulf of Mexico and the Caribbean. Each morning, the sun rose from the Eastern Sea, from a chaotic and violent realm. Here, great cosmic battles raged between gods and sea serpents, as the ocean turned red. The saline taste of seawater evoked the taste of the blood that coloured the ocean red at sunrise and sunset, whence the ‘Fiery Pool.’

Surrounded by this threatening domain, the Maya clung to the turtle’s carapace, which cracked and shook when earthquakes struck or floods descended on the fields. They believed that the Maize God, Ka’will, rose out of the Underworld Sea through fissures in the tortoise shell.

The Maya envisaged their cosmos as a layered realm. Above arched the great dome of the heavens, high above the familiar world of the living. The Wacah Chan was the conduit between the cosmic layers, descending from sacred portals like caves, pools, and springs into the Underworld. Here, a huge body of water supported the ground and coursed through great underground rivers, a pulsing artery that flowed west from the eastern Caribbean Sea. Like many other ancient societies, the ancient Maya thought of the sea, rivers, clouds, and all sources of water, as one, a vital medium that sustained humanity and the foods they ate. They made no practical distinction between the realms of fresh and salt water. But the Fiery Pool was a domain of awesome powers that generated hurricanes and violent rainstorms, the birthplace of the sun, the creator of clouds and wind. Here dwelt a huge mythic crocodile, whose limbs extended to the cardinal points that defined the square Maya world. Water cascaded from his extremities, the cosmic flood. Here the Rain God Chahk dwelt in timeless waters that were the source of light, abundance, and riches.

The decipherment of Maya glyphs has revolutionised our perceptions of their society and its beliefs. It is only now that the central role water and the ocean played in their thought is coming to the fore. If, per chance, you are crossing the Pond in coming months, be sure, if you can, to see the magnificent exhibition of art objects called Fiery Pool: The Maya and the Mythic Sea. It will change the way you think of these remarkable people. The exhibit is at the St Louis Art Museum, Missouri, until 8 May 2011. And if you cannot go, please acquire the accompanying book of the same title. It is both informative and magnificent.