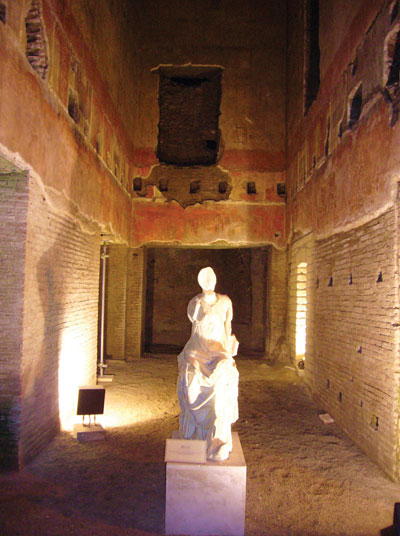 Archaeologists excavating Nero’s Domus Aurea (Golden House, so-called because of its original gold-leaf interior) have found the foundations of what they believe to be the chief banqueting room described by Nero’s biographer, Suetonius, who said it was ‘circular and revolved perpetually, night and day, in imitation of the motion of the celestial bodies’. Suetonius also wrote of stars painted on the ceiling, and ivory panels that slid back to allow petals and perfume to be sprinkled on the guests.

Françoise Villedieu, the director of the excavation, described the room as 16m (53ft) in diameter, built of brick and supported by a pillar with a diameter of 4m (13ft). Traces of a wood platform have also been found, which suggest that the room’s circular motion was achieved by floating the room on a pool of water. The dig has also found rooms attached that might have accommodated the kitchens.

Nero built the extravagant palace on a prime spot on the Esquiline Hill – with a panoramic view over the Roman Forum – after the aristocratic dwellings that originally occupied the site were destroyed during the great fire that devastated Rome in AD 64. Angelo Bottini, Rome’s archaeological soprintendente, said that Nero liked to think of himself as the sun around which Rome revolved. Nero did not have long in which to enjoy his Golden House, for he was forced to commit suicide in AD 68, the same year the house was completed; as part of the process to erase Nero’s memory (the damnatio memoriae), the palace was stripped of its gold, ivory and marble fittings, filled with earth and built over by the Baths of Titus.