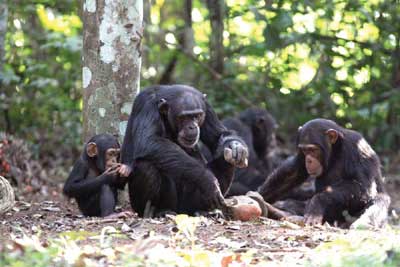 ‘Why don’t we study the chimpanzee stone age?’ asks an international group of researchers in a paper recently published in the journal Nature (Vol 460, July 2009). Based at leading universities in Europe, Asia and America, the authors argue for the creation of the new interdisciplinary field of primate archaeology to answer such fundamental research questions as what tools have been ‘invented’ and used by non-human primate species, when and where, what circumstances allowed or prevented such inventions and how has tool use influenced the anatomy, evolution and conceptual capacity of human and non-human primates?

Professor Julio Mercader, of Canada’s University of Calgary, argues that such research is hampered by the separation between archaeology, which focusses on human evolution, and primatology, which tends to be biological in focus. The result, says Mercader, is that ‘few archaeologists have seen a wild primate use a tool, while few primatologists have taken part in archaeological excavations’.

The need to bring the two disciplines together is highlighted by research showing tool use by a wide variety of wild primates – including orangutans, bonobos, gorillas, capuchins and macaques. Mercader, for example, excavated the first prehistoric evidence of chimpanzee technology in 2007 – a 4,300-year-old nut-cracking site in the rainforests of Côte D’Ivoire, West Africa. There is also a growing body of evidence that tool use pre-existed human evolution, and was practised by the common ancestor of chimpanzees and humans before the lineage split some five to seven million years ago.

Such discoveries, say the researchers, ‘challenge the conventional idea of tool use as exclusive to the human genus’, and demonstrate the need for ‘comparable methods of data collection among researchers dealing with two-million year old hominin sites and modern primatological assemblages’. •