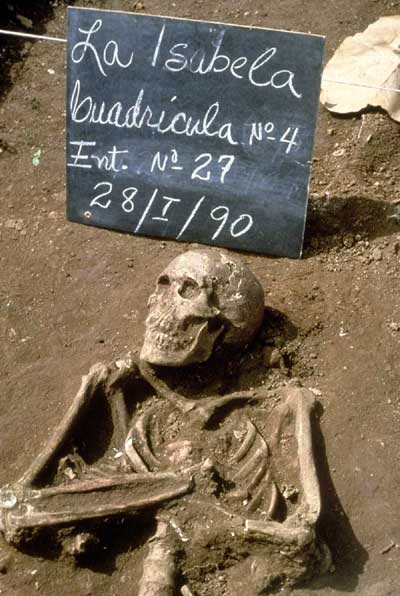 A graveyard in La Isabela, in the Dominican Republic, is yielding unexpected evidence for first inhabitants of the settlement founded by Christopher Columbus on his second voyage to America in 1493—1494. Some 1,200 men went with Columbus on board the fleet of 17 vessels that crossed the Atlantic to found what is often called the first European settlement in America (though predated by Leif Erikson’s 11th century Viking settlements in Newfoundland).

The teeth of 20 individuals excavated from the cemetery of the short-lived settlement are being analysed for evidence of childhood diet; three have been shown to have ‘Old World’ diets, suggesting they were original crew members, and one has the isotopic profile for a millet-based diet, suggesting African origins. It was known that Columbus took his personal African slave on his voyages of discovery, but the new analysis could mean that Africans played a larger role in the first documented explorations of America than has been realised.

Women and children have also been found at the cemetery, suggesting that the all-male crew married indigenous Taíno women in the early days of the settlement, by contrast with the programme of enslavement and genocide that Columbus subsequently instigated.

The skeletal remains suggest a high incidence of scurvy, as well as signs of malnutrition and physical stress. Chronicles of the voyage noted that most of the Europeans, including Columbus himself, fell sick shortly after landfall on Hispaniola. Many of those who subsequently died were interred in La Isabela’s churchyard, attached to a colony that lasted less than five years. •