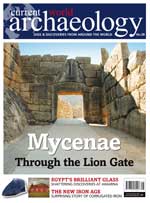 Golden Mycenae is one of the most famous ancient towns in the world, but how did it work?   In the first of a two part feature, David Mason takes us to Mycenae, walking along the little-known roads to see Mycenae as the Mycenaeans saw it, with the Treasury of Atreus carefully placed for maximum impact. Thereafter, in the subsequent instalment, Andrew Selkirk leads us up onto the citadel and wonders where the ordinary Myceneans lived.

We follow Mycenae with an ancient mystery: how did the Egyptians make glass? Paul Nicholson began exploring the evidence at Tell el-Amarna, the capital of the ‘heretic pharaoh’ Akhenaten (1352-1336 BC). Amarna was planned as a ‘new town’ by Akhenaten and abandoned soon after his death. Consequently, the site offers a rare and significant snapshot of urban Egyptian life and industry at that time.

Archaeology is the study of material culture, and very few materials — whether glass or gold – escape our attention. But what about the archaeology of modern materials such as plastic, rubber or corrugated iron? All are viable sources of study, as we demonstrate in our article exploring the history and uses of corrugated iron. If you thought corrugated iron simply the stuff of air-raid shelters or allotment sheds, then you might be surprised at the far-reaching and exotic history of this much maligned material.

Location, location, location
GREECE Unravelling the mystery of the location of the Treasury of Atreus – also known as the Tomb of Agamemnon – far from the other royal tombs at Mycenae

The Magic of Mycenae
GREECE In the second installment of this two-part special on Greece, Andrew Selkirk takes us on a visitors’ tour of   Agamemnon’s capital

The New Iron Age: The history of
corrugated iron
Industrial archaeology Corrugated iron was a revolutionary building material. In these pages, the unusual history and scope of this valuable resource is considered

DIARY
Egypt’s sunken treasures; on tour in Yemen; a final plea to save Allianoi in Turkey

READERS WRITE
DNA lineage; Neanderthal traits; why rock art should not be chalked; Churchill
in Sicily

ON SITE INSIGHTS
A visit to Selge, in Turkey, an impressive Graeco-Roman city that prospered until the 7th century AD