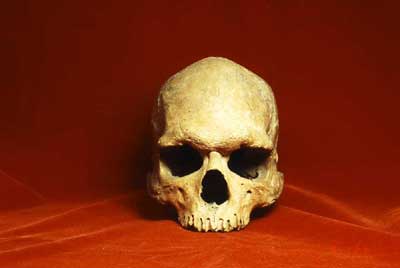 Did humans originated from a single point in Africa and then migrate across the world, or did different populations independently evolve from Homo erectus to Homo sapiens in different areas?

Scientists from Cambridge University believe they now have the answer to this long-debated conundrum. The researchers studied the genetic diversity of human populations from around the world and took measurements of over 6,000 skulls from across the globe in academic collections. They found a loss in genetic diversity, plus a loss in variation in physical attributes, the further a population is from Africa. This research knocks down one of the last arguments in favour of multiple origins. Thus the scientists found that genetic diversity decreased in populations the further away from Africa they were – a result of ‘bottlenecks’ or events that temporarily reduced populations during human migration.

They then studied an exceptionally large sample of human skulls. Taking a set of measurements across all the skulls the team showed that not only was variation highest among the sample from south eastern Africa but that it did decrease at the same rate as the genetic data the further the skull was away from Africa. To ensure the validity of their single origin evidence, the researchers also attempted to use their data to find non-African origins for modern humans. However, as Dr Andrea Manica from the University’s Department of Zoology who is leading the research explained: ‘we tried to find an additional, non-African origin. Yet this just did not work. Both in terms of DNA analysis and through our investigation of skulls, we are convinced that humans originated in a single area in Sub-Saharan Africa.’ The research also rules out any significant interbreeding between modern humans and Neanderthals. Manica explained: ‘The evidence also implies a lack of hybridisation with older hominid species, since interbreeding would be expected to bring in a large amount of new genetic material, and thus an increase in diversity. This is not what we have found’.