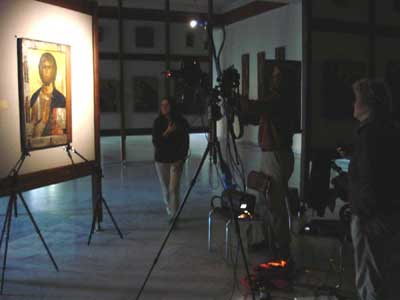 Computer scientists and cultural heritage researchers are working to combine today’s increasingly sophisticated 3D computer technology with the latest historical and archaeological evidence to produce significantly improved visual reconstructions of churches, palaces and other ancient sites. Their aim is to depict – more accurately and realistically than ever before – the appearance of heritage sites in their heyday. It is hoped that the resultant programmes will help historians, students and museum visitors gain a much better feel of how such sites were perceived by the people who used them in the past and what it was actually like to be there. In particular, the effects of smoke, dust, fog and interior lighting conditions (all of which would have impacted on the way that buildings were experienced by contemporaries) can now be modelled very accurately, for the first time.

New developments in display technology also mean it is possible to produce images that are many times brighter, more vivid in colour, incorporate better contrast between light and dark – and are therefore much more realistic – than those previously achievable. ‘We are trying to produce images that show more realistically the actual conditions of the time we are looking back at,’ explained Warwick University’s Professor Alan Chalmers who is leading the project. Chalmers went on to say ‘The future might even see the combining of extremely accurate high-fidelity 3D representations with temperature, smell, sound and other parameters. Our work may well lead to a significant new tool that could help put us in closer touch with the past’. Indeed, unlike physical models of heritage sites, one of the key benefits of computer reconstructions is that data can be held in an easy-to-manipulate digital format. Each reconstruction can therefore be updated simply and cost-effectively whenever new evidence, about a site or the period from which it dates, comes to light. For example, chemical analysis of an ancient lamp can provide specific details of the particular fuel it used. This information can then be used to determine how much and what type of smoke the lamp might have produced, and exactly how the colours of objects would have been perceived in the lamp’s light, as these can change depending on the precise nature of lighting conditions.

Such revelations can then be incorporated directly into computer-generated simulations of a relevant site, providing perhaps a different perception of how it would have appeared. Prof. Chalmers’ feasibility study is focusing on Cypriot remains from the Byzantine Empire (c.350-1450 AD) and will be completed in January 2008. However, the high-fidelity computer graphics techniques that are being developed within this project will not just be limited to archaeology. They will also be applicable to other fields that require highly realistic visualisation, including medical images, product design, architecture and even crime scene reconstruction.