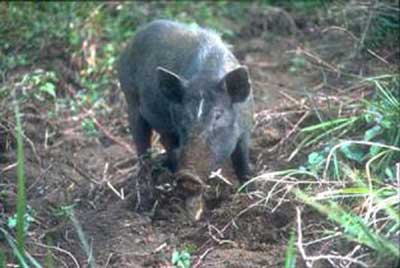 Pigs don’t just make for a good bacon sandwich, they reveal more about humanity’s history than you might have imagined. A survey of wild and domestic pigs is casting new light on the origins of Austronesian farmers and the migration routes early farmers travelled to reach the remote Pacific.

Scientists from Durham University and the University of Oxford have been studying the DNA and tooth shape in modern and ancient pigs and have revealed that the Polynesian pigs that accompanied humans during their colonisation of the Pacific originated in Vietnam. It seems that the pigs, together with their owners, travelled along the islands of Southern Indonesia, crossing the famous biogeographic divide known as the ‘Wallace Line’, before reaching New Guinea, then the near and remote islands of Oceania. This is in contrast to the traditional models of Austronesian migration, which has the ancestors of Pacific colonists beginning their journey in Taiwan and moving southwards through the Philippines before continuing their epic journey into the Pacific. Using mitochondrial DNA obtained from modern and ancient pigs across East Asia and the Pacific, the researchers demonstrated that a single genetic heritage is shared by modern Vietnamese wild boar, modern feral pigs on the islands of Sumatra, Java, and New Guinea, ancient Lapita pigs in Near Oceania, and modern and ancient domestic pigs on several Pacific Islands. The new study – funded by the Wellcome Trust, the Leverhulme Trust, the Smithsonian Institution, and the Fyssen Foundation – also shows that the colonization process was probably more complex than previously assumed.

Research project director Dr Keith Dobney explained that many archaeologists have suggested that the combined package of domestic animals and cultural artefacts associated with the first farmers of the region came together in one place before being transported wholesale as Neolithic culture and farming dispersed.

However the new pig study underlines the likelihood that the various elements of the package probably took various routes through Island South East Asia, before being transported into the Pacific. Indeed, though many sources of evidence – including human genetic and linguistic data – appear to support the traditional model that Pacific colonists originated in Taiwan; this new evidence from pigs suggests that early farmers moved from Vietnam bringing their domestic plants, animals – including pigs – with them.

Project geneticist, Dr Greger Larson said: ‘Certainly, pigs are good swimmers, but not good enough to reach Hawaii. Given the distances between islands, pigs must have been transported and are thus excellent proxies of human movement. In this case, they have helped us open a new window into the history of human colonization of the Pacific.’ The team is confident that this research will inspire geneticists and archaeologists to reconsider traditional models of colonization, and to appreciate that human colonisation is often far more complex than any neat map of early human dispersal might suggest.

This is an extract from the full article published in Current World Archaeology 23. Click here to subscribe