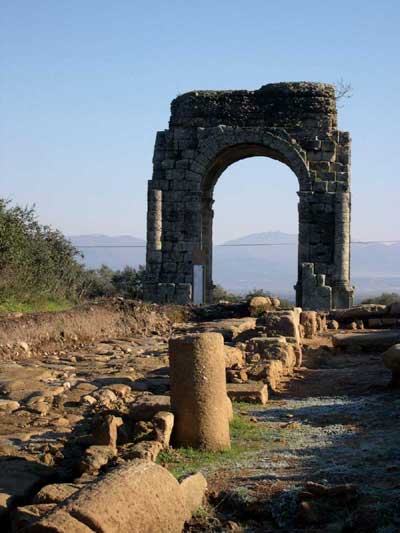 The Annual European Union Prize for Cultural Heritage / Europa Nostra Awards seek to show how keen the European Union is to promote its ideals of a common European Heritage. Thus in June 2006, 34 Laureates from 22 countries made their way to Madrid to participate in a lavish European Heritage Awards Ceremony. The event was presided over by H.M. Queen Sofía of Spain and was also attended by dignitaries and representatives from the public sector and civil society involved in heritage conservation and enhancement.

Two of the five top prizes were won by projects with an archaeological bent: the prize for Cultural Landscapes, went to the Vía de la Plata, Extremadura project in Spain; and the Conservation of Architectural Heritage prize was awarded to the 16th century Omeriye Ottoman Baths in Nicosia, Cyprus.

The Vía de la Plata was created in Roman times from the junction of two major axes linking the north and south of the Iberian Peninsula at Augusta Emerita (present-day Mérida). It was an important crossroads around which the capital of Lusitania formed in 25 BC. The route subsequently witnessed the invasion of Muslim troops, the passage of pilgrims on their way to Santiago de Compostella, and the seasonal migration of livestock. Its current name comes from the Arabic term balata, meaning “paved road”.

However, the paved road had suffered from neglect and so in 1998 the Regional Government of Extremadura launched a vast project to restore the ancient Roman route. Their lofty plan was that this would encourage tourism and thereby stimulate the development of the local rural areas that had suffered from depopulation and scant resources.

The judges deemed their project a success throughout the portion of the Roman route running through Extremadura from north to south. The ancient causeway has been excavated and consolidated; and the stretch fully signposted on granite cubes – a boon for both visitors and locals. In all, 32 historical monuments along the route have been restored and opened to visitors or put to new uses as hostels or interpretation centres. “A harmonious balance between conservation and tourism has been achieved and the route has become the cultural backbone of the region”, announced Europa Nostra.

The Architectural Heritage prize went to the Omeriye Ottoman Baths, restored by a team from the Municipality of Nicosia, led by architect Athina Papadopoulou in collaboration with the UNDP (United Nations Development Programme). The baths were built around 1571 by Lala Mustafa Pasha, the first Ottoman administrator of Cyprus but have suffered from extreme lack of maintenance. The list of problems was long: the exterior render of the domes had severely deteriorated, water had infiltrated, the stones and mortar had decayed, vegetation had penetrated, the embedded iron elements had corroded, cracks had developed and the whole stability of the building was precarious. Anyone daring to enter this timebomb of a building was met by peeling plaster, noxious fumes from the disintegrating hypocaust and furnace, high heat and humidity levels, plus out-dated electrical and sewerage systems.

The team set to work restoring the building and retaining the baths’ traditional use. Works principally involved reinstating the structural capacity of the damaged walls, shells and domes. Roots were removed, cracks repaired, and corroded door anchors replaced. They dismantled any deformed segments, which were then numbered and reconstructed using the original stones where possible; or where necessary, new limestone ashlars from the Nicosia district quarries were used. Following extensive research and documentation, they removed the hypocaust and constructed a new structure of fired bricks and stone slabs. They consolidated the deteriorating walls by grouting with a hydraulic lime mortar. During their work, they revealed hidden architectural features, including walls attesting to the existence of an older building. Having been exposed, these older elements have been protected behind a glass wall for all to admire.

The team worked hard to ensure that new installations were accommodated without disruption to the building’s architectural integrity – for example, by hiding any new elements beneath the floor or in low-key structures. The restored baths have been in full operation since March 2005, and have contributed immensely to upgrading one of the most neglected areas of the city.

The five main winners each received a prize of 10,000. However, there were also 29 Medals and Diplomas (2nd and 3rd Prizes). Of these, the Diploma in the Cultural Landscapes category deserves a mention. This has been a major project, unifying the sites around the Acropolis in Athens into a vast archaeological park, and one that many of our readers may come to enjoy.

The ambitious programme took seven years and was completed in 2004. It covers an area of some 1,500,000 m2 in the heart of the densely populated city and takes in the Ancient Agora and Areopagus Hill, the Roman Agora and Library of Hadrian, and the Western Hills. Creating this park has been under discussion for decades, but the issue was continuously postponed due to the numerous obstacles to be overcome. Finally, the major road axes that had previously bisected the sites were paved over for pedestrian use. This was the first step to creating the park, and thereafter the concept became reality.

The above-mentioned sites were cleared of waste material and vegetation, important monuments were restored, new finds were revealed, fencing was erected, sheds constructed for the display of moveable finds and in situ protection of fragile remains. The ancient street network was revived through the creation of an organised route for visitors, complete with signposting and information panels, greatly facilitating access and circulation. And of course, functional infrastructure, such as ticket houses, was also built. These initiatives, says Europa Nostra, have clarified the ancient topography of the area and greatly enriched the experience of visitors.