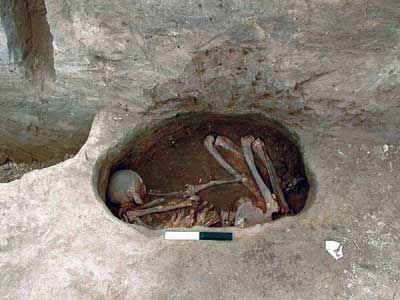 Far from modern humans being big-headed, it appears that the human face has been shrinking. Researchers have observed a notable trend toward rounder skulls with smaller faces and jaws over the past 10,000 years. In fact, it seems that 10,000 years ago, our ancestors’ heads and faces were up to 30% larger than now. The main cause of facial reduction appears to be related to the change in diet from hunting and gathering to farming. With this came the associated switch to softer, or cooked foods which are softer to chew. This means that jawbones, teeth, skulls and muscles do not need to be as strong as in previous ages. This shrinkage could well explain modern dental problems caused by crooked or overlapping teeth.

These conclusions are based on measurements from thousands of teeth, jawbones, skulls and other bones collected from prehistoric sites around the world by a number of researchers. Among those studying this trend is Clark Spencer Larsen, Professor of Anthropology at Ohio State University, whose work has demonstrated a decline in face size in the Pre-Colombian American Southeast.

In the course of his research, Larsen has observed other significant changes – for example, that we now have fewer teeth: 10,000 years ago everyone grew wisdom teeth but now only half of us get them. Other researchers have also observed significant reduction in the size of teeth. C. Loring Brace of the University of Michigan, for example, has documented major tooth size changes throughout the world. Brace also relates the reduction of tooth size to the shift from foraging to farming – and particularly the profound impact of cooking food into a soft mush, a practice that must have gained momentum thanks to the invention of pottery.

Larsen’s study is now set to examine the skulls from Turkey’s labyrinthine 9,000 year old city of Çatalhöyük, where he will document changes in face and tooth size in comparison with their nomadic predecessors.

But is softer, farmed, food really the only cause for this shift in our appearance? Some scientists blame sexual selection – a preference by prehistoric people for partners with smaller faces. Prof. Simon Hillson, of the Institute of Archaeology at University College London, measured 15,000 prehistoric teeth, jaws and skulls collected by museums around the world from he has has studied humans, living from 26,000 years ago to about 8,000 years ago, and found the same pattern of shrinking faces. He is unsure exactly why people might have chosen mates with smaller, shorter faces.