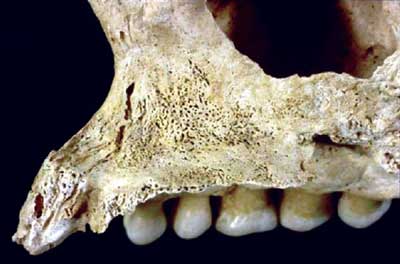 In the Middle Ages leprosy was widespread. However, it unaccountably declined around the same time that tuberculosis began to spread across Europe. Indeed, tuberculosis has gone on to become a major long-term epidemic disease, with one-third of the world’s population now infected and more than eight million new cases in the year 2000 alone.
But of the two killer ailments, why did leprosy decline and tuberculosis increase? New research led by scientists from University College London’s Centre for Infectious Diseases and International Health may hold the key.
Their study, led by Helen Donoghue and Mark Spigelman, began with the discovery by Israeli archaeologist Shimon Gibson of a body deposited in a sealed chamber that had been overlooked by tomb robbers. The body, found in Jerusalem and dated to the 1st century AD, had been buried according to the normal practice of wrapping the deceased in a shroud. People would return to it after a suitable time, when the bones would be reburied in an ossuary. But in this case, the shrouded body had not been reburied. The UCL scientists thought there must have been a reason for this, so they decided to look for signs of leprosy – a cause of fear and stigma at the time – in addition to the tuberculosis that they had already detected. An initial examination of the body revealed signs of co-infection of TB and leprosy in the bone tissue.
After finding both diseases in the body, the researchers, together with collaborating groups from around the world, re-examined other samples from sites around ancient and mediaeval Europe. They found that co-infection appears to be a fairly common, previously unrecognised phenomenon.
They studied 31 samples of potentially diseased samples dated from the 1st to the 15th centuries. Of these, 24 samples contained detectable DNA from one or other of the bacteria that cause leprosy or tuberculosis. But in 10 of these 24 samples, they found DNA from the bacteria behind both diseases. This indicated that these individuals were co-infected.
Scientists have long speculated over whether cross-immunity might have protected patients with one of these diseases from getting the other. It was widely thought that if someone contracted TB, for example, then they would be immune from getting leprosy. However, the new findings suggest a different explanation.
As Dr Donoghue told CWA: ‘It is likely that someone with leprosy, and thus with a low natural resistance, would be more vulnerable to becoming infected with tuberculosis. My colleagues and I suggest that this happens as a result of the social conditions experienced by people suffering from leprosy. They became outcast, and were stigmatised as being ‘unclean’. One very old theory for becoming ill with leprosy was that you had done something very evil and that this was your punishment. We know that both physical and mental stress can make you more susceptible to infection, and we suggest that this happened in the past.’
With respect to previously-held medical beliefs about cross-immunity, Donoghue added: ‘We think that the cross-immunity theory is much less likely to be the explanation for the decline in leprosy in the late middle ages in Europe. Records from 19th and early 20th century patients in other parts of the world confirm our suggestion that patients infected with both leprosy and tuberculosis will die of the tuberculosis. It spreads more quickly and will kill victims more quickly, especially if their natural immunity is low – as it would be if they also had a chronic progressive disease like leprosy. If leprosy patients die of tuberculosis they would not have time to pass on the leprosy to someone else, as it takes time for this to happen. We think that is the main reason why leprosy has virtually died out in Europe yet tuberculosis is still a big problem.’
So it seems that in the war of the killer diseases, tuberculosis has reduced the number of individuals suffering from leprosy leading to an overall decline in leprosy in Europe in the Middle Ages.