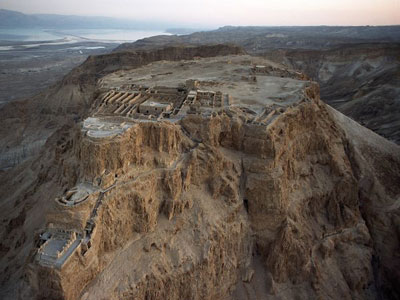 The dig
Ancient historian Josephus records a dramatic end to the Siege of Masada in AD 73. As the final act of the Jewish Revolt of AD 66-73 – the subject of Josephus’s Jewish War – the writer records the mass suicide of 960 men, women, and children. These hardline revolutionaries – the original Zealots – preferred death by their own hands to slaughter, rape, or enslavement at the hands of their enemies.

Yigael Yadin, who fought in the Israeli armed forces, describes himself as privileged to have been invited by the Israeli authorities to carry out two seasons of intensive excavations from October 1963 to May 1964, and from November 1964 to April 1965 at the site. ‘Masada represents for all of us in Israel and for many elsewhere, archaeologists and laymen, a symbol of courage, a monument to our great national figures, heroes who chose death over a life of physical and moral serfdom.’ The political significance of the Zealot resistance at Masada is contested, but there is no question that the new Israeli state regarded the site as a potent symbol of the Zionist cause, that Yadin shared this perception, and that it helped him attract a small army of young volunteers, both Israeli and foreign, to carry out the work. A total of 11 months’ work took place over the two seasons, the break between May and November 1964 being necessitated by the scorching summer heat.

The discoveries
The excavators fully revealed virtually all of the structures built by Herod the Great in the second half of the 1st century BC. These included two massive storerooms, a large bathhouse, an administrative building, an apartment building, a ‘Western Palace’ complex complete with ‘Throne Room’, and the famous three-tiered ‘Hanging Villa’ on the northern peak. Many of the rooms for grand living were decorated with colonnades, stucco-work, fine mosaics, and brightly coloured frescos. Above all, this was true of the extraordinary Hanging Villa.

The rock of Masada rises 1,200ft (366m) above the surrounding land, often in the form of vertical cliff-faces; it is an immensely strong natural fortress. The Hanging Villa comprises three tiers of grand rooms, each on its own rock-terrace, with sharp drops on three of the four sides, the whole ensemble resembling the projecting prow of a ship when viewed from above. These rooms were no doubt designed for their spectacular views, and they were sumptuously decorated in the high Classical style that one could have seen in the cities of Italy at the time. Yet more important, however, was the abundant evidence for the Zealot occupation during the revolution of AD 66-73. Excavators found improvised living-quarters in and adjacent to the casemate walls around the top of the plateau. Much of the debris – pottery, coins, bone utensils, soft-stone vessels, basketwork, leather sandals, even plaits of human hair – bore testimony to the simple life of the peasant-revolutionaries represented.

The deductions
Among the discoveries were some fragments of scroll, including one bearing part of a passage of text otherwise unknown except in the corpus of the Dead Sea Scrolls. This was highly significant. It provided a direct link between the religious radicalism of the Scrolls and the political action of Jewish revolutionaries, allowing us to treat the former as a reliable guide to the mindset of at least some of the latter. The Scrolls can now be used with confidence to shine a beam of light on the motives of the Zealots and other groups engaged in the struggle against Roman Imperialism.

As for the Herodian remains, the expense, luxury, and Classical taste revealed simply confirm the massive gulf – social and cultural – which separated the Jewish elite from the Jewish masses, a gulf that surely made revolution far more likely.