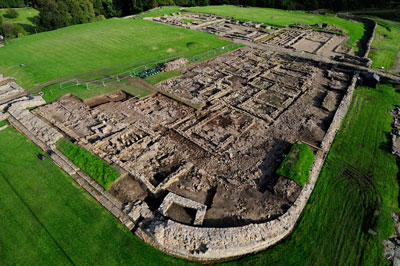 In Spring 1973, Robin Birley, Director of Excavations at Vindolanda Roman Fort, just south of Hadrian’s Wall in Northumberland (Northern England), made the greatest discovery of his life: a small, thin fragment of wood which unfolded to reveal ink-marks – before the wood went black on exposure to air. It was later shown to be part of a letter sent with socks, sandals, and underpants. The discovery was made during excavation of deep, damp levels sealed by successive layers of clay in repeated rebuildings. Further excavation in 1974 and 1975 brought the total number of tablets or groups of fragments to over 200, of which more than half had some writing on. Since then, excavation on other parts of the site has revealed many more, and the corpus of Vindolanda Tablets now totals more than 1600. When found, the fragile fragments are removed in soil blocks for trench-side excavation, then placed in water for cleaning, and afterwards immersed in ‘baths’ of methyl alcohol and ether to dry them out, restore their colour, and make them easier to read. The tablets have been transcribed and translated by specialist papyrologists Alan Bowman and David Thomas.