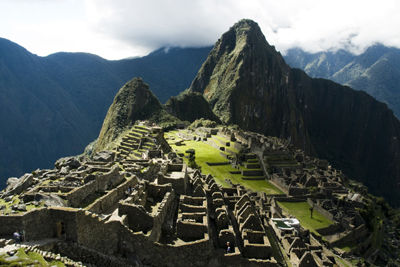 The Spanish sources recorded the existence of a last Inca refuge, Vilcabamba, the location of which was later lost to memory. Hiram Bingham (1875-1956), a US academic, explorer, treasurehunter, and (later) politician, set off in search of this ‘lost city of the Incas’. His expedition team included a geologist/geographer, a naturalist, a surgeon, a topographer, and an engineer. This reflected the challenge: a deep trek into unmapped, Central Andes mountain-forest.

Bingham was led by native guides to a site only accessible down rocky paths with precipitous drops on either side. On a saddle-ridge between two mountain peaks, with the gorge of the River Urubamba 600m below, he was shown, amid dense thickets, the terraces, stairs, and buildings of an Inca site formed of massive blocks of monumental masonry.

Bingham carried out a series of clearance-excavations on the site and at others on the 70km-long ‘Inca Trail’ between the ancient capital at Cuzco and Machu Picchu. The Inca engineers had terraced the saddle, levelling the rough stone of the plateau to create a series of small plazas and building platforms for their temples and associated buildings. The steep flanking slopes were also terraced, in this case for cultivation and the small houses and other structures of the inhabitants. There were also cave-cemeteries on the slopes, many with human remains and grave-goods in situ.

Altogether, the 200 or so buildings on the site would allow for a population of about 1,000 people. But who were they? Who had chosen to live in such a remote and inaccessible place?

Bingham was convinced he had found the fabled ‘lost city’ of Vilcabamba, the final refuge of the last, rebel Inca emperor, Manco. ‘Nothing like them in design and execution has ever been found,’ he said of the most impressive ruins. But Bingham found no Conquest-period artefacts, and no evidence of the burning and destruction which the Spanish sources record as the fate of Vilcabamba. The lost city has now been more confidently identified as the site at Espiritu Pampa in the Amazon jungle.

Machu Picchu’s significance is more prosaic: it symbolises the extent, technical skill, and productivity of the Inca Empire in its heyday. Its High Andes location represents the former border of the Empire in the mid-late 15th century, when it extended 3,500km north-south and around 300km inland from the coast. This vast domain was tied together by an estimated 40,000km of road. Machu Picchu is an example of this: almost inaccessible in Bingham’s day, still hard to reach today, it was clearly an integral part of the 15th-century Inca Empire. The culture of Machu Picchu proves this. The intensive cultivation represented by the tiers of little terraces clinging to the slopes, the monumental scale of the engineering and architecture, and the sophistication of the stonework all bear testimony to Machu Picchu having been part of a great civilization.