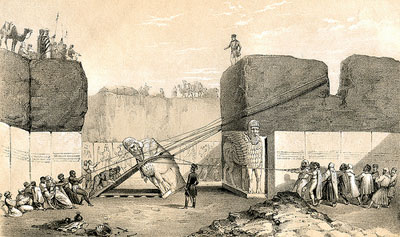 The dig
Austen Henry Layard was a lawyer, traveller, diplomat, and amateur archaeologist in the antiquarian tradition. On an overland ride from England to Ceylon in 1839, he became fascinated by the newly emerging archaeology of Mesopotomia (in modern Iraq).

The region lay within the territory of the Ottoman Empire, and Layard subsequently secured an unpaid position as a diplomatic attaché in Constantinople. He was therefore able to return to Mesopotamia and carry out excavations of his own – first paid for by himself and the British ambassador at Constantinople, later by the British Museum.

Layard’s methods were crude, but typical of his day. He would excavate downwards until he hit walls decorated with bas-reliefs, and would then follow these as far as he could. At nearby Nineveh, excavated during a second British Museum-funded expedition in 1849-1851, he dug two miles (3km) of bas-reliefs and cleared 70 rooms in the palace of Sennacherib. The aim was the recovery of art objects for study in their own right, as opposed to the exploration of a site by scientific excavation with recording of features and artefacts in context.

The discoveries
At Nimrud, Layard discovered the palaces of the Assyrian kings Ashur-nasirpal (883-859 BC) and Shalmaneser III (858-824 BC). These lay within a royal city, in use for about 150 years, which comprised a roughly rectangular enclosure measuring c.350ha in total. The site lay alongside the ancient course of the River Tigris, and was surrounded by a mud-brick defensive wall. It included a citadel crowned by a 197ft-high (60m) ziggurat. Here, successive Assyrian kings built their palaces and temples. The total population of the city may have been as high as 80,000.

The finds recovered by Layard included objects that have since become some of the greatest treasures of the British Museum: huge winged lions and bulls, the Black Obelisk of Shalmaneser III, and the sculptures of Ashur-nasirpal. These created a sensation in Britain in the late 1840s.

A correspondent of the Morning Post had visited the excavations to report on them as they happened. A volume of drawings, The Monuments of Nineveh (sic: Layard at first believed Nimrud was Nineveh), was published in 1849. A popular account, Nineveh and its Remains, published in 1848-1849, became a bestseller, with 8,000 copies sold in the first year. This success prompted John Murray to bring out a series of volumes for sale at the new W H Smith railway bookstalls; among the first half-dozen titles was A Popular Account of Discoveries at Nineveh.

The deductions
Nimrud – Biblical Calah – was one of four major Assyrian royal cities, all located within a 35-mile (56km) area in the Tigris Valley in Upper Mesopotamia (northern Iraq). The original capital, in use from c.2000-880 BC, was Ashur. Nimrud (c.880-710) was the second; Khorsabad, with the royal palace of Sargon II (721-705 BC), the third; and Nineveh (c.705-612 BC) the last and greatest. The Assyrian Empire expanded rapidly in this period, filling the vacuum left by the decline of the Egyptian and Hittite Empires at the end of the 2nd millennium BC, and eventually uniting the whole of the Near East under the authority of the Assyrian kings in Upper Mesopotamia. Brutal and militaristic, the Assyrian Empire was based on tribute payments and the maintenance of a strong army of heavily armoured and highly disciplined warriors.
The Assyrian kings built and adorned palaces as symbols of power. What Layard had discovered was the art and architecture of imperial domination: the huge winged lions and bulls, each 11ft 6in high (3.5m) and weighing 30 tons, had stood guard at the palace gates. Massive and human-headed, what were they if not the demon-deities who secured the rule of the masters of the Near East in the early 1st millennium BC?