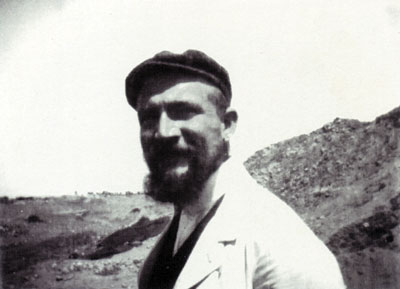 The dig
The site of Babylon – one of the oldest, richest, and most fabled cities of Antiquity – had attracted a succession of European antiquarian investigators during the 19th century, but it was not until the arrival of a German Oriental Society (Deutsche Orient-Gesellschaft) team led by Robert Koldewey (1855-1925) that scientific excavations were first undertaken. Industrial-scale digging by a British Museum team in 1879-1882 had recovered large quantities of baked-clay cuneiform tablets and other artefacts, but these had been dug out without regard to context or the integrity of the archaeological site.

Koldewey belonged to the new generation of scientific excavators who had an understanding of stratigraphy and the need to expose and record layers systematically in order to build up a chronology of the site, a narrative of its development, and a sequence of provenances for the artefacts recovered. Of particular importance were Koldewey’s innovations with regard to mud-brick remains.

Very little of ancient Babylon had been built of stone; even great monuments had commonly been constructed of oven-baked or sometimes only sun-dried mud. The frequently recurring decay, demolition, levelling, and rebuilding of mud-brick structures on Mesopotamian tells (the artificial mounds formed by long-used settlement sites) demanded exceptional skill to recover stratigraphic sequences. This Koldewey supplied.

The discoveries
The excavations revealed a great north–south Processional Way, raised some 12m (40ft) above the surrounding plain, with paving slabs of red and white stone, and flanking walls covered in brightly coloured glazed tiles and decorated with images of lions, bulls, and dragons. The Processional Way led from the famous Ishtar Gate (so-called for its dedication to the goddess), which, reconstructed in the Pergamon Museum in Berlin, stands some 30.5m (100ft) across and nearly 9.2m (50ft) high. The street continued into the centre of the city, past the great temple known as Etemenanki, and then dog-legged to cross the Euphrates (which at the time ran through the middle of the city) over a massive bridge.

The temple comprised a 76m (250ft) tower with triple staircases leading to elevated sanctuaries dedicated to various Babylonian gods. This tower – or ziggurat – is likely to be the Biblical ‘Tower of Babel’. The Greek historian Herodotus recounts a fertility rite performed within the main temple on the summit, where ‘one Assyrian woman, all alone, whoever it may be that the god has chosen’ was left for the night to be impregnated by Bel.

The deductions
Where previously the site had been simply a confused series of dusty mounds, Koldewey identified the fortifications, the major thoroughfare, and the monumental structures from which a basic ground-plan could be worked out. His meticulous excavation and recording, moreover, revealed for the first time the extraordinary splendour of the art and architecture of the mid 1st millennium BC city – the city later taken over by the Persians, then captured by Alexander the Great, and thus spectacularly reconstructed in CGI for Oliver Stone’s film Alexander.

However, Koldewey’s identification of a series of substantial foundations as those of the famous Hanging Gardens of Babylon is likely to be wrong, and, more generally, two major problems beset our understanding of the site: much of it now lies beneath a river that has changed course in the last 2,000 years, and much elsewhere is inaccessible in its lower levels due to the high water-table.

In consequence, we know a good deal about the Neo-Babylonian city of Nebuchadnezzar, but very little about its antecedents. The late 3rd millennium to early 1st millennium BC city remains largely unkno