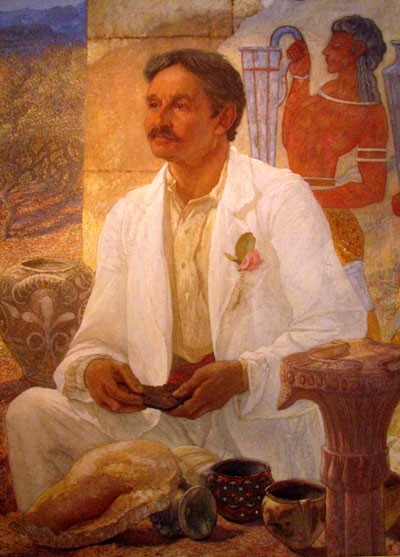 The dig
Arthur Evans, the wealthy son of prehistorian John Evans, was ‘a man of independent means’ who did not need to earn his living. After completing his education at Harrow and Oxford, he travelled widely in the Balkans, and made a minor name for himself as the Manchester Guardian’s special correspondent in Bosnia and Croatia. During this time, he studied Balkan antiquities, and on returning to England, he became Keeper of the Ashmolean Museum in Oxford, from 1884 to 1908.

His interest in Knossos had been triggered by a visit to the site in 1894 – a visit made in pursuit of seals with a mysterious hieroglyphic writing that were turning up in the markets of Athens, and that purportedly came from Crete. In 1900, Evans completed negotiations for the purchase of the site, and excavation began, with the assistance of experienced field archaeologist Duncan Mackenzie. The main excavations, involving between 50 and 180 labourers, took place over the next five years, followed by conservation and, more controversially, reconstruction work. The main excavation report, The Palace of Minos, was published between 1921 and 1936.

The discoveries
Results surpassed all expectations. Evans revealed a vast palace complex of Middle Bronze Age date (c.1900-1450 BC), establishing that a distinct ‘Minoan’ civilisation on Crete had preceded (and heavily influenced) the later ‘Mycenaean’ civilisation (c.1650-1150 BC) on the Greek mainland. It was during the ‘Second Palace Period’ (c.1700-1450 BC) that Knossos reached its zenith.

The palace complex included a central courtyard, a secondary western courtyard, a suite of royal apartments, a throne room with carved gypsum throne, and extensive storerooms and workshops. Around 1,300 rooms were connected by a network of corridors. The rooms of the royal apartments were stacked three or four storeys high, and served by light-wells, water-pipes, drainage, and a grand staircase.

The royal apartments, along with some other grand rooms, were decorated with elaborate, colourful, vibrant wall-frescos, depicting dolphins, flying fish, griffins, court ceremonies and rituals, and sports like boxing and bull-leaping.

The ground-floor and basement storerooms were notable for their numerous stone boxes and ceramic storage-jars (pithoi), containers for the produce needed to support a court and royal administration which may, judging by the evidence of Linear B inscribed tablets found at Knossos, have numbered more than 4,000 people.

The deductions
The famous Greek myth of Theseus, the Minotaur, and the Labyrinth contains two interesting clues about Minoan civilisation and its relationship with mainland communities. First, the Labyrinth itself seems to have been some sort of folk memory of the great palace revealed by Evans’ excavations.

Second, at the heart of the fable is the requirement that Athens send seven boys and seven girls to Crete every nine years to be eaten by the Minotaur. This may represent a former tributary relationship between Athens and Knossos. What is certain is that the archaeology of Knossos strongly implies a tributary economy based on maritime power.

The development of a hieroglyphic script (Linear A) to inscribe clay documents is evidence for a complex bureaucracy. Though Linear A, the true Minoan script, has not been deciphered, Linear B, used by the Mycenaeans and represented in the latest layers at Knossos, has been. These texts undoubtedly amount to the ancient equivalent of modern tax records.

The location of Crete, the myth of the Minotaur, the richness of Knossos, and the spread of Cretan artefacts across the Eastern Mediterranean all argue for a central role for the Minoans in Middle Bronze Age trade. It seems reasonable to suppose mercantile wealth supported a strong navy able to impose tributary relationships on satellite states like Bronze Age Athens.