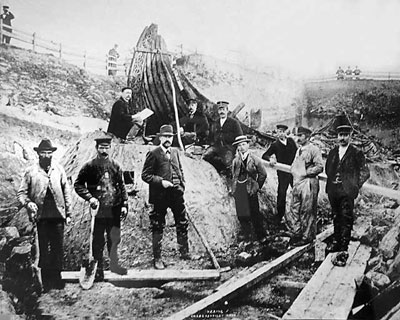 The dig
In August 1903, a farmer at Oseberg, 43 miles from Oslo on the margins of the Oslo Fjord, brought some timber remains he had found on his land into the University Museum. They had been unearthed from a 6m-high mound in the middle of a grassy plain. Smaller satellite mounds existed on the surrounding hills. The region was rich agricultural land with good access to the sea.

The Director of the Museum was Gabriel Gustafson. Viking ship-burials within mounds were already known to Scandinavian archaeology. A 24m-long Viking ship had been excavated in 1880 at Gokstad, also on the Oslo Fjord. The human remains in the burial chamber may have been those of King Olaf Geirstadralf of the Ynglingar dynasty, a figure known from the Norse Sagas.

Gustafson visited the new site and confirmed that it was a ship-burial. Between 6 May and 16 December 1904 he carried out what turned out to be the most spectacular Viking dig ever mounted. The woodwork of the ship and the artefacts it contained had been preserved between the blue-clay subsoil and the layer of peat forming the mound, so Gustaffson was rewarded with the greatest haul of Viking woodcraft ever found.

The discoveries
The ship itself was built almost entirely of oak, in clinker design (where the horizontal planks of the hull overlap downwards), and was 21.5m long, 5.1m broad, and 1.5m deep. It had 30 oars, a side rudder, a gangplank, a bailer, and an iron anchor. It is estimated that its mast would have been 13m tall.

The skeletal remains of two women were found: one elderly, who had suffered from arthritis and swollen feet; the other much younger, perhaps 25-30. The former was almost certainly royalty, perhaps even Queen Asa, a notable figure from Norse Sagas. The other may have been a servant who accompanied her mistress to the Underworld.

The status of the burial was clearly demonstrated by the richness of the grave assemblage. The ship itself was decorated with superb wood-carving, as were some of the other objects recovered from the ship, including a heavy four-wheeled cart. Among the wooden objects were found four sledges, three beds, a chair, and various chests, looms, buckets, kitchen utensils, and agricultural tools. There were also textiles – bedding, woollen garments, tapestries, imported silks – and metalwork – notably an iron ship’s cauldron with chain and collapsible tripod.

Gustafson’s excavation had provided an extraordinary window into the material culture and public appearance of the world represented by the Norse Sagas at the beginning of the Viking Age.

The deductions
The size of the ship, the elaborately carved decoration (especially on the steeply soaring bow and stern), and the relative fragility of the vessel may indicate that it was a state barge for ceremonial use on inland waters. On the other hand, while the burial seems to date to the 830s, parts of the ship date from earlier, and there is evidence for repairs.

The Gokstad ship is later in date and shows some design improvements. The implication may be that ships like that from Oseberg were used for the earliest long-distance Viking voyages, but that shipwrights learnt lessons from the experience and began designing more robust vessels, causing older models to be retired into local service.

If so, Oseberg offers insight not only into the culture and wealth of the early Viking Age elite, but also into the rapid development of seafaring technology that enabled the Vikings to mount long-distance voyages of discovery and campaigns of conquest during the 9th and 10th centuries.

We also get a feel for the iconic significance of longships in contemporary Viking culture and in displays of rank and status. When we see the Oseberg ship restored to full splendour in Oslo’s Viking Ship Museum, we understand why skaldic court poetry is replete with references to ships as ‘oar-steeds’, ‘horses of the breakers’, ‘fjord-elks’, and ‘surf-dragons’.