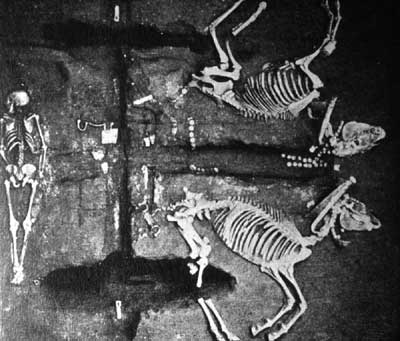 In AD 1079, a heavy storm near the town of Anyang in northern China caused an earth mound to collapse, revealing a splendid tomb containing human remains, horses, chariots, and fine bronze vessels. In the late 19th century, the ‘Mounds of Yin’ became known to Western scholars as the source of abundant ‘oracle bones’. On-site exploration soon yielded tens of thousands of pieces of inscribed shell and bone. Finally, between 1928 and 1937, systematic excavations by Chinese archaeologist Li Chi allowed the site to be characterised and dated. Anyang was found to comprise an unwalled complex measuring almost 10km in length and 4km in width. This area included: a royal cemetery with 11 shaft-tombs; some 2,000 small graves; a sanctuary with several worship halls and a residential area; groups of aristocratic houses; artisan workshops for the manufacture of bronze, stone, jade, bone, and shell artefacts; and servant quarters. There is debate about whether the site represents the Late Shang capital – with palace, temple, funerary, and industrial functions – or simply an elaborate mortuary complex for the ruling dynasty and its entourage.