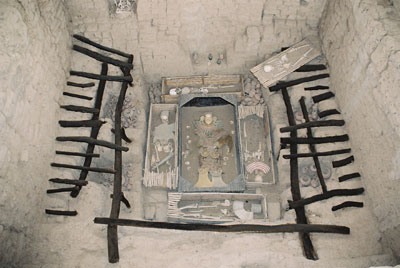 The discovery of an intact Moche royal tomb was like something out of an Indiana Jones movie. A gang of impoverished local looters entered one of three pyramids at Huaca Rajada, Sipan, a major Moche site near the Peruvian coast. Laden with loot, Ernil Bernal was poking with a stick to find an exit from the structure and discovered an intact royal burial chamber overhead. The chamber promptly poured out its contents, and Bernal was buried to his shoulders in treasures of gold, silver, and precious stones. He had located the only known intact tomb of a Moche lord.

Rumours about the site quickly attracted other looters and eventually triggered a shoot-out. The police got involved and alerted Dr Walter Alva, local inspector-general of archaeology. Shown some of the material recovered, he was immediately sure of its significance and organised an emergency excavation, assisted by leading Moche scholar Christopher Donnan from UCLA.

The site, constructed over many years, comprised two large truncated pyramids, connected by ramps; a third, smaller pyramid – the one looted – was freestanding but linked with the others across a plaza. The looters had missed many of the original objects in the tomb, but something far more spectacular awaited Alva and Donnan as they extended their search to other sectors thought vulnerable to future looting.

The pyramids were mausoleums containing a series of burials accompanied by rich offerings. These included one sumptuously rich, undisturbed burial of a Moche ruler. It yielded possibly the richest haul of pre-Columbian treasure ever found in the western hemisphere.

The Lord of Sipan – as he was dubbed – lay beneath an arrangement of large wooden roof-beams underneath the burial of an adult male. Entering the intact chamber, the excavators first found the remains of another adult male, aged 35-50 at the time of his death. He was accompanied by copper objects and a large war-club encased in copper sheet. On the opposite side of the tomb was yet another adult male, this one buried above a sacrificed llama. Between the two was the body of the Lord of Sipan himself.

On top of his royal headdress was a large gold ingot. The inside of the coffin had been covered over with beaded pectorals. Beneath these were found personal ornaments of exceptional richness – necklaces, nose-rings, ear-rings, bracelets, and helmets, mostly made of gold, silver, copper, and semi-precious stones, some 400 objects in total.

As investigation proceeded, other burials were uncovered inside the tomb: the Lord of Sipan had been buried with three adult females in addition to his male companions. Only when all these burials were in place, along with the associated grave offerings, had the tomb been sealed.

Tomb 1 was the richest, but two other, older tombs, also handsomely furnished, were found at yet lower levels of the pyramid.

The Huaca Rajada tombs revealed the hitherto unknown refinement and sophistication of Moche culture. No comparable assemblage of high-status material had ever before been found by archaeologists. On the other hand, it underlines the possible quality of material that may have been lost to looters at other sites, notably from the great pyramids in the Rio Moche Valley, 150km to the south. And if Huaca Rajada is representative of a number of Moche sites in the coastal region of Peru, the implication may be that society was organised in a series of independent principalities rather than as a centralised empire.

The discoveries also confirm the militaristic character of Moche society, with its ritual focus on the sacrifice of war-captives by throat-cutting and the drinking of their blood during ceremonies at the pyramids. Many of the objects recovered from the tomb of the Lord of Sipan seem to have had some relationship with this practice.