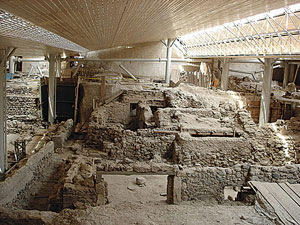 Akrotiri destroyed and discovered
The discovery of Akrotiri was the culminating achievement of veteran Greek archaeologist Spyridon Marinatos (1901-1974). He had advanced the (now discredited) theory that Minoan civilisation had been destroyed by the volcanic eruption on Santorini (also known as Thera) in the middle of the 2nd millennium BC. Akrotiri was the dramatic demonstration of the power of the eruption. A series of earthquakes had damaged the city, but a period of calm had followed. Then the volcano exploded, showering ash and pumice over the whole island, filling the houses of Akrotiri to a depth of several metres, preserving them to heights of two, even three, storeys. Finally, the centre of the island collapsed, leaving a vast sea-filled basin, generating a giant tsunami across the Aegean, and triggering earthquakes throughout the region. Santorini was left uninhabited for centuries. Akrotiri lay undisturbed for 3,500 years.

Akrotiri described
A triangular strip of the town has been excavated, where about a dozen houses are ranged on either side of a narrow street. Larger, free-standing houses are built of squared ashlar blocks, while smaller ones, of rubble, timber lacing, and clay plaster, are conjoined. None has a regular plan. The impression is of houses designed to fit a plot and subsequently added to. Ground floors appear to have been storage areas, with residential accommodation above, reached by stone stairways rising from entrance lobbies just beyond front doors.

Akrotiri painted
Preserved as standing structures, the most striking thing about these houses, presumed to have belonged to merchants, is the quality and range of the frescoes decorating the internal walls. One shows young girls, wearing tiered skirts, open-fronted bodices, and jewellery of gold and lapis lazuli, collecting crocus flowers in baskets. An older seated woman receives handfuls of crocuses from a blue-painted monkey. Another scene has naked boys with heads shaven save for a single lock of hair alongside an older man, also naked but with full hair. Other scenes include a fisherman and boy boxers. The most famous of all is the ‘Ship Fresco’ from the West House, a long frieze depicting a series of coastal towns, a flotilla of galleys, with fish, dolphins, and humans swimming alongside, and dozens of spectators on the shore, including warriors, priests, and herdsmen. Is it a festival? A trade convoy departing? A victorious military expedition returning? We cannot be sure.

Akrotiri interpreted
Architecture, artefacts, and art reveal Akrotiri to have been a prosperous Middle Bronze Age trading community. Ground-floor storage rooms and numerous ceramic storage jars, many of them built into benches, attest an abundance of portable commodities. The quality of the houses and their interior décor is a clear mark of prosperity – a surplus of wealth for investment in fine living. The frescoes themselves depict booming towns and harbours packed with ships. They also permit insight into the rich ritual life of the ancient Akrotirians. And both artefactual styles and artistic motifs speak of links with a wider Cycladic culture and, to a lesser extent, with that of Minoan Crete. Akrotiri is an archaeological monument to the rich commerce, connections, and culture of the Middle Bronze Age Mediterranean.