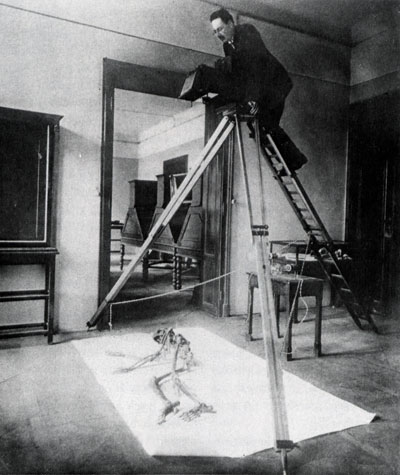 The dig
Rather than one major campaign of excavation, it was the results from a series of interventions over almost half a century, pulled together by Dr D K Absolon, Curator of the Government Museum in Brunn, Czechoslovakia, during the interwar period. This work of synthesis was then widely publicised from the mid-1920s onwards.

The site was identified by Jindrich Wankel in 1880. It was the first open-air Upper Palaeolithic site to be explored, its exceptional quality the result of its burial under deep layers of the windblown silt or ‘loess’ characteristic of much of Central Europe.

What triggered renewed interest were further revelations in 1924, when large trenches were dug by a brick-making company. The profusion of bone, stone artefacts, and decorated objects uncovered was such that the government took possession of the site, and systematic scientific investigation began. However, Absolon was particularly preoccupied with the study of the remains of around 20 individuals excavated by Professor Maska in 1894. They had been found in deposits at the base of a rock shelter, and seem to have formed a single mass grave comprising 12 adults and eight children of varying ages. One of the children was associated with a necklace, another with the skull of an Arctic fox.

The discoveries
The site comprises several distinct elements. As well as the mass grave, there are pits, hearths, the sites of dwellings, and general scatters of animal bone and stone tools. There is also evidence for repeated use of the site: Middle Palaeolithic material has been recovered from the lower levels; and the main Upper Palaeolithic levels, created by occupants with a ‘Gravettian’ culture, appear to represent a series of separate phases.

Attention focuses on the osteological, faunal, and artefactual assemblages. The skulls confirm that the people of Ice Age Predmostí were Cro-Magnons – fully developed members of our own species, Homo sapiens. The disorder of the skeletons in the grave implies either that it was an ossuary, or that it was frequently reopened to receive successive interments, or both. The carefully constructed grave was boat-like in shape, and surrounded by a palisade of upright mammoth shoulder-blades. A layer of stones had been placed over the bodies.

The upper levels at the site included a vast collection of mammoth bones, about 1,000 animals. There were also the bones of other Ice Age species – musk-ox, reindeer, cave-bear, horse, wolf, wolverine, fox, and hare. Of the seven canine skulls found, at least three appear to be examples of domesticated dogs. Portable art includes pendants, female figurines, a mammoth carving, and a stylised female figure carved on mammoth tusk.

The deductions
Predmostí was the first example of an open-air site used by Upper Palaeolithic hunters in Ice Age Europe to be investigated. The human remains recovered confirmed the biological identity of contemporary European hominids as Homo sapiens. The faunal and artefactual assemblages revealed their cultural sophistication in adapting to a bitterly cold environment and exploiting its abundant mega-fauna. The care with which human remains had been interred and the presence of artefacts of probable religious significance indicate a rich ritual life among the PredmostÌ hunters. Specifically, the treatment of the dead implies some sort of ancestor cult, while the female figurines indicate fertility rites, perhaps associated with some sort of Earth Mother deity.

The valuable material from Predmostí and other Moravian sites was lost when retreating Nazi troops burned down Mikulov Castle in 1945.