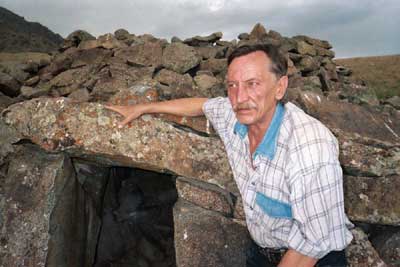 Your request to elucidate my archaeological life, to say something of the change from the Soviet Union to the Independent Republic of Uzbekistan came as a big surprise for me.

Simply, God gave me an opportunity to start my work in archaeology as a research assistant to Galina Anatolevna Pugachenkova – famous art critic and wife of Mihail Masson, who is considered rightly to be the father of archaeology in Central Asia. We worked together for many years, covering tens of thousands of kilometres studying sites and objects, and these expeditions that I made with Mme Pugachenkova became the best practical study for my profession.

In addition to my work in Uzbekistan, I was lucky enough to be on an archaeological expedition in Crimea investigating the Scythian culture. I became fascinated with the history of culture and religious beliefs of Central Asian nomads, and I spent some time on expeditions in the mountainous Altai territory. In the course of my years of work with Galina, I was lucky enough to find an Ishtihan Assuarian burial complex and to discover a very large Sogdian city, which was founded in the 5th century BC and rebuilt in the 4th century at the time of Alexander the Great. However, I also became very interested in mining, and I worked in close contact with geologists to find the sources of ore and minerals in the Republic. From the ancient times, Central Asia was a treasure trove of useful materials and precious metal ores, and I was given the task of investigating ancient mining activity to determine the most likely places for modern geological reconnaissance.

At the same time I was also working on my home territory of Uzbekistan, and particularly in the capital, Tashkent, preparing for the 2000th anniversary of the city’s foundation. My job was to take stock of the archaeological monuments of Uzbekistan and to prepare schedules for the statute book of monuments and to compile archaeological maps of the territories of Turkmenia, Kirgizia and Tajikistan. During these researches I was able to ascertain new types of archaeological sites, including some examples of megalithic cultures.

The problem of saving historic cultural heritage has stirred and excited me constantly throughout my life. Until 1979 in Uzbekistan there was only the Society for the Protection of Ancient Monuments. I and a group of enthusiasts under the leadership of K S Kryokov had to work compiling the regulations and statutes for the organisation of monument protection. It was attached to the Ministry of Culture of the Uzbek SSR.

When the Soviet Union collapsed I set up my own independent archaeological expedition, Turon. Our main task was to compile protective zones for the most prominent archaeological monuments and at the same time to continue with the Committee of Geology and Mineral Resources in studying the history of ancient gold in Central Asia. In 1993 we started archaeological excavations in Samarkand on the Gur-Amir mausoleum and on the central mosque, both monuments of the 5-6th centuries AD. And as a result of many long trips in north-western Tajikistan and southern Uzbekistan, I could with considerable exactitude define the birth place and beginning of activity of the founder of the Zoroastrian religion.

When the Soviet Union still existed there was a very dangerous and vicious system whereby the achievements of individual researchers were passed over in silence. There were place hunters [climbers] who tried to ‘snap off a piece of pie’ of the achievements of others, and when the results of the work of a scholar were at variance with the established system of ideology or revealed the weakness or omissions of the systems for protecting monuments, then they were all suppressed. The wreck of the communistic diktat allowed, though only partly, the organisation of independent groups to study the remains of ancient cultures. However, the system of total ideological control for science workers in Uzbekistan is still in progress and it does not astonish me – functionaries of government as well as of science are the pupils of Marxist- Leninist ideological schools. Many young functionaries in the Academy of Science or local administrations are either corrupt or have moral or mental defects. Thus dread of objective results, of scientific investigations on the territory of Central Asia is the fully natural condition of today.

Frankly speaking, the state was not financing archaeological works at all during the years of the Great Independence of Uzbekistan. This was particularly disastrous following the great earthquake of 1966 that destroyed the historical centre of Tashkent. There was a real danger that the antique rarities of ancient workmen would be destroyed and lost. I had to do something: I consulted with my family, and I sold my flat to free up revenue, and spent one and a half years making archaeological observations in the Old Town part of the city. This was the result of the new geopolitical conditions at that time! The head of the public inspection of Protection for Memorials of History and Archaeology was a former electrician, and the man whose duty was to protect the remains of history and archaeology was a specialist in chemical and agricultural buildings. What science can one expect from such specialists?

On 26th April 1966, a massive earthquake destroyed Tashkent. The consequences were to the archaeologist almost worse than the earthquake itself. Vast new districts were constructed, a subway was installed, modern buildings were erected, and new business complexes entirely altered the historical appearance and topography of the city. A ‘model Soviet city’ of wide shady streets, parks, immense plazas for military parades, fountains, monuments, and acres of apartment blocks was created. Ancient structures above and below ground, as well as ancient hydro-structures, disappeared as a result of uncontrolled construction.

Yet, there is plenty of evidence for the ancient city of Tashkent. Destiny placed Tashkent at a highly strategic position on the Silk Road, and for almost two millennia, caravans found shelter there within cosy caravanserais. During the Middle Ages, the area from western Siberia to the banks of the Dnestr River was called the Dnestr Kipchak. The Kipchaks were known as the Polovts in Russian chronicles, who are well know to western opera lovers for their Polovtsian dances. As a bordering area, Tashkent was a rock between the ways of the nomads and the settled farmers. Though Tashkent does not possess monuments of high historical significance, such as those in Bukara and Samarkand, there is no city in central Asia that has such a wealth of archaeological layers.

The earliest reference to the city, by the name of Yuyeni (Yuni) is contained in the Chinese chronicles of the Senior Khan House, which date back to the early 1st and 2nd centuries BC. Arab authors chronicling the invasion of Central Asia by Arabs named the surrounding land ‘Shash’. Binkent, the capital of Shash is mentioned in the chronicles of the 10th century AD. Gradually, the transformation of the name from Shash to Tash – which means stone – took place. Tashkent, or Taskend, the stone city, is first mentioned by the great Persian mathematician and astronomer Beruni (d.1048 and after whom a crater on the moon is named). The name of the city first appears on coins during the time of the Mongols. Chingizid Khans often visited this city during the political events of the Timurid’s age. Tashkent is mentioned as a place of arbitrational tribunals of Chagatay princes, as a headquarters of the Timur’s army, as well as a tempting stopping place for caravans crossing the Silk Road. Kazakh, Uzbek, and Mongol rulers fought for control of this strategically located city.

But where was this city? The city that we excavated, the city of Tashkent as we know it, was not the ancient meeting place between the nomadic steppes and the farmers of Turkmenistan. Perhaps Binkent (Shash) was never located at Tashkent, and actually existed in another locale. Upon the coming of the Arabs to Central Asia in the middle of the 8th century AD, Binkent decreased as the result of this Arab expansion in the region. Was the city we now know as Tashkent founded in its place? Ancient sources describe a great battle between tens of thousands of Chinese warriors, and the Arab army headed by Ziyad ibn Salikh. The battle was won by the Arabs.

During our archaeological excavations, a large cache of artefacts was gathered. Oriental poets sang about the creative genius of the artisans, and this was demonstrated among our treasures. There were high quality red and pink ceramic dishes, and the delicate thinness of the sides and the mirror-like glistening of the glaze over the inscriptions attract all who see these amazing dishes.

The city of Tashkent was created on the cross-roads of the caravan routes from Bukhara and Samarkand to the west, to China in the east, and from the steppe to the north and the mountain regions to the south. The glazed dishes of Tashkent excel the ceramics of Samarkand and could match craftsmen examples of Kashan, Tebriz and Herat. The ceramicists of the Old City used zoomorphic ornaments in the shape of birds, fish, and deer. And from the middle of the 10th century, epigraphic inscriptions appeared in the manner of blossoming Kufi – wonderful works of art that began to reflect typological principles of Muslim aesthetic.

The movement of material and spiritual values on the great Silk Road led to the mutual enrichment of the peoples by the artistic achievements of their neighbours. The analysis of ornamental elements includes motifs of Chinese, Mongolian, and Indian pictures as well as images of Arab and Persian regions. In this way, the aesthetic principles of the whole Middle East were subtly born in the works of ceramicists. This heritage has vast importance for all the kinds and genres of modern art today: they are important for world culture as a whole.