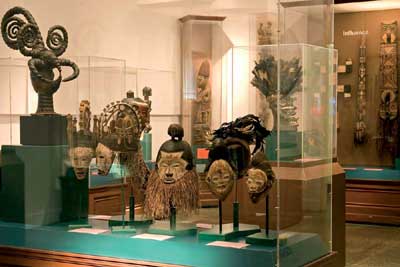 Professor Richard Hodges, director of the Institute of World Archaeology in East Anglia, director of the excavations of Butrint, and CWA post-card writer extraordinaire, has just taken up a new post as director of one of the world’s great museums: the University of Pennsylvania Museum of Archaeology and Anthropology. The museum was founded in 1887 and has been behind some of the world’s most important archaeological and anthropological expeditions to Ur, Egypt, Africa, East Asia and South America. Here Richard remembers his first encounter with the museum.

Philadelphia and the University of Pennsylvania Museum of Archaeology and Anthropology have long held a special place in my heart. In 1980 Colin Renfrew, then Professor of Archaeology in Southampton University, organized a special plenary session at the Society for American Archaeology (SAA) meeting in Philadelphia. ‘The Brits were coming’, was the sub-text, to display how they were dealing with that particularly American export, the so-called New Archaeology (of the 1960s and 1970s). Eighteen young British (and Danish) university lecturers formed part of his entourage.

Our instructions were precise: we were charged to purchase a litre bottle of Glenfiddich at (Heathrow) duty free and then provide, if I recall correctly, a further $20 each to a party fund. So, by various routes and stratagems, this cohort made its way to Philadelphia and its celebrated Museum, directed at that time by Colin’s Cambridge University contemporary, Martin Biddle.

Graeme Barker arranged a lecture tour for the two of us which took in Wesleyan, Brown, Harvard, a mini-conference at SUNY-Binghamton (where Denmark’s Klavs Randsborg joined us), then Pittsburgh and finally Philadelphia. The road trip, of course, was a fundamental part of the experience along with a visit to the Hancock Building in Boston to see our first diaroma, and then the battlefield at Gettysburg. Once in western Pennsylvania we began to feel the weight of the coming challenge. First, there was the welcome party in the Museum; then there was the plenary meeting; and finally, the British party in Colin’s hotel-top suite in the Sheraton.

The Museum was the first awesome engagement. The labyrinthine halls and galleries, echoing to the cheery nervousness of our fellow Britons, was my first encounter with this archaeological mecca. Its celebrated collections, the fruits of great excavations between 1886 and the Second World War, were legendary. In 1980 it seemed dazzling. Martin Biddle bade us welcome, though his archaeology was altogether different from Colin Renfrew’s and his entourage. Martin was Britain’s most distinguished excavator, possibly the finest in post-war Europe, but he and I had genially clashed on the meaning of his use of these excavations to write a new urban history. Colin Renfrew, on the other hand, had assembled an entourage of economic prehistorians as well as ‘New Archaeologists’ (greatly influenced by American anthropological archaeology) and, for the first time, a post-processual archaeologist in the form of its ‘inventor’ Ian Hodder.

Gathered in the museum, many of us, new to the USA, had a distinctly uneasy sense of what we had been bidden to do. Our nervousness was quelled by the genial reception orchestrated by Bernard Wailes – a Cornish archaeologist who joined the University of Pennsylvania in the early 60s – who was our kindly billet-master.

All was evident when we arrived the next day at the auditorium in the Sheraton. It accommodated, we were told, two thousand, and when Colin rose to start proceedings, it was completely full. Rows of names known to us from publications beamed back at Colin as he proceeded to launch what was to become one of his most celebrated days in American archaeology. We each had 18 minutes, punctiliously marked by an egg-timer and an old-fashioned alarm clock. I vividly recall my profound terror as I gazed out on this vast audience, knowing such eminent figures as Lew Binford were preparing with zeal for this occasion. My 18 minutes passed in a daze, as I spoke about royal agency and planning in the first post-Roman European urban communities, challenging Martin Biddle’s seminal essay of some four years earlier, but using anthropological models and metaphors to seduce an American audience. Chairman Renfrew seemed pleased. At least he beamed at me because I halted the precise instant that the intimidating alarm beat its bell.

The discussion, however, was exactly what we expected of the USA. Bob Whallon in sombre tones barely disguised his unease at our approach. The huge audience grew restless, regarding his remarks as discourteous. The great and the good promptly fell upon him. The verbal discourse, however, wickedly encouraged by Colin’s masterful chairmanship was soon to reach a visceral level. Ian Hodder was invited to speak. Most in the audience regarded him as the late David Clarke’s principal pupil, but the previous December in Sheffield (at the Theoretical Archaeology Group meeting) Ian had divested himself of New Archaeology and bared his soul as a postprocessualist. He offered no apologies for his volte-face and compellingly set out his new stall. The Philadelphia meeting was one of his first public statements in the USA, and the audience, engineered to a pitch by Colin Renfrew, reacted with understated savagery. At least that was how it seemed. Colin, the erstwhile Cambridge University debating champion, virtually swooned as the encounter grasped the vast audience, creating animated divisions because the previously new guard sensed they were about to be consigned to history! Naturally I thought all American meetings were like this. Colin, of course, knew better. Hence, the mythic party the following evening.

Colin assembled us to purchase the beverages. Like the Pied Piper, we followed him in his hallmark gabardine blue mackintosh down to a 7/11, where to the amazement of the staff he intoned in his quintessential Oxbridge accent on what we should purchase. This, naturally, we did and filed after him carrying the cases back to the Sheraton.

Never have I been to a party like it. Two thousand American archaeologists, it seemed, cramped into Colin’s suite, where Paul Halstead was charged to be the first of a series of distinguished bar-men. (He later departed, rigid as a plank.) The debate about Bob Whallon and Ian Hodder’s interventions were limply pursued as Colin introduced the massed ranks to Greek songs, and with more liquid support, to Cycladic dancing. And so we whiled away the night, till close to dawn I elected to find a taxi back to the west Philadelphian house where I was staying. Graeme returned a little later, and we set out for Washington, very much the worse for wear, passing archaeologists now truly distinguished in European circles – who were on automated pilot attempting to find their billets.

When Cambridge University Press published ‘Ranking, Resource and Exchange’ two years later, this sombre if elegant account of our session in Philadelphia scarcely conveyed the generosity of our American colleagues and the untrammelled intellectual excitement of those days. Philadelphia, beginning at the Penn Museum, thrillingly opened our eyes to American archaeology.