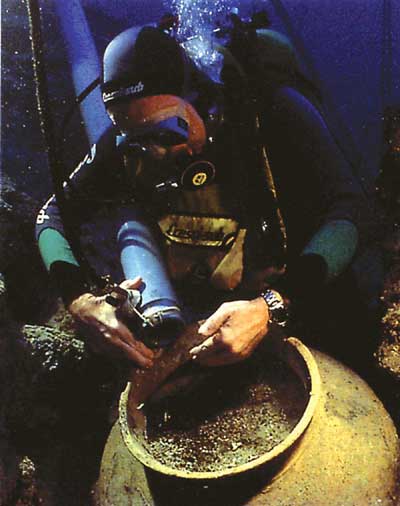 Underwater archaeology has a double advantage. First, water tends to act as something of a preservative, protecting wood and other perishable items. Second, the sites – namely, the sunken ships or boats – can be difficult to reach by all but experienced divers, thus protecting them from random digging. Despite this double advantage, nautical archaeology was a neglected sphere of archaeology. Or such was the case before the work of George F. Bass.

Professor Bass, who founded the Institute of Nautical Archaeology in America in 1973, has made huge advances in underwater archaeology; and has helped to make it a legitimate, and worthwhile, aspect of archaeology. Recently retired, Bass has now edited a collection of articles in his book, Beneath the Seven Seas, which looks back at some of the key wrecks excavated by, or that involved members of, the Institute of Nautical Archaeology. The book, published by Thames and Hudson (£24.95), upon which this article is based, runs the gamut from Bronze Age wrecks to those of the 20th century.

Bass was a man who started young, took risks, followed his passion, and dived for archaeology for over 40 years, beginning in 1960 while still a PhD student. Bass’ career was sparked by American photojournalist Peter Throckmorton. Throckmorton had been living on Turkish sponge boats from 1958-59 and asked the sponge divers to show him any ancient remains on the seafloor, which he then recorded. Among these wrecks was the oldest then known: a Bronze Age vessel from about 1200 BC. Throckmorton was sure that the wrecks could and should be excavated as carefully on the seabed as terrestrial sites are excavated on land. He wrote to Professor Young, an archaeologist working in Turkey’s Gordian, the ancient capital of King Midas of the golden touch, asking if his institution, the University of Pennsylvania Museum, would sponsor an excavation of the wreck.

Bass was one of Young’s PhD students, had assisted at Gordian, was particularly interested in the Mediterranean Bronze Age, and had read deeply about diving since a child – even though he had never dreamt he would ever dive. ‘In retrospect’, writes Bass ‘it seems almost fated that Professor Young asked me if I would learn to dive and be the archaeologist for Peter’s proposed excavation of the Bronze Age shipwreck’. After completing only six weeks of a 10 week YMCA diving-course, Bass went on to become the first person to excavate an ancient shipwreck in its entirety in the sea bed. Thus began over a decade of underwater archaeology that culminated in the establishment of the Institute of Nautical Archaeology in 1973.

Even after the establishment of the Institute, some challenged the notion that underwater archaeology could be a success. Professional divers, wishing to maintain a monopoly on underwater work, argued that archaeologists could never dive well enough to accomplish anything useful at depth. However, that notion was finally put to rest between 1984 and 1994 during the excavation of Uluburun in Turkey – a Bronze Age wreck that required dives between 45m and 60m. This was the deepest large-scale diving project ever conducted with normal scuba, made possible only by extreme safety measures that could not be duplicated by weekend divers who should not dive to such depths.

The wreck at Uluburun, built of famed Lebanese cedar, was probably a royal ship. It has been tree ring dated to around 1300 BC, placing it firmly in one of the most active and colourful periods of the ancient world: the time when Late Bronze Age Greeks were constructing the great palace at Mycenae, and the time when Egypt was ruled by the heretic pharaoh Akhenaten, whose queen was the beautiful Nefertiti.

The ship has an astonishing cargo, comprising enormously valuable raw materials and some manufactured goods. The main cargo is made up of 10 tons of Cypriot copper ingots, originally stowed in four transverse rows across the ship’s hold. In addition, the archaeologists found ‘treasures’, including the largest collection of Canaanite jewellery of any excavated site; Egyptian objects of gold, silver and steatite; plus weapons of likely Near Eastern and Aegean origin. The products found on the ship are truly multicultural – coming from nine or 10 ancient cultures – from northern Europe to tropical Africa, and from Sicily to Mesopotamia. Why was this extraordinary cargo on board? The archaeologists suggest the goods were probably placed in the care of an official who represented a king’s interest, but who probably engaged in some private trade of his own.

A second intriguing underwater Turkish site is the wreck at Serce Liman, excavated by the INA between 1977-1979. The sunken ship, dated to c.AD 1025, had yet another unexpected cargo: 10-20,000 glass objects – culet, glazed bowls, and wine glass vessels – but all smashed.

In many ways, the excavation was routine; i.e. the team covered the site with a metal grid to break it into squares 2m a side, so each diver – or pair of divers – could be responsible for the excavation of a specific area of the wreck. They then mapped the wreck with underwater drawings, photographs and measurements taken from fixed metal stakes driven into the rock around the site. The only difference was that Bass does not believe in using gloves during underwater excavation because so much depends on touch. Soon, however, the archaeologists’ bandaged hands looked like they were excavating razors, and gloves were donned. Perhaps the only other distraction was the octopus who lived in an amphora in one of the squares. The octopus forever tried to take the watch from the archaeologist working on his patch, or to extract the glittering glass from his hands.

After the first year of careful recording work, the team realised something startling about part of the ship’s cargo: they were in fact dealing with a cargo that included broken glass intended to be recycled. All those millions of labelling digits they had painstakingly inked onto the smithereens had been meaningless, other than that they provided proof that the glass had been shovelled randomly into the ship’s hold from some even larger pile of broken glass.

Nonetheless, some 80 intact glass vessels were recovered from the living quarters, and after more than 20 years of year-round mending, Bass and his colleagues have managed to assemble by far the largest collection of medieval Islamic glass in the world. In addition, the ship itself has been carefully reassembled above ground. Though only about 15% of the hull was preserved, it represents an early example of a modern ship, which helps in the understanding of the development of ship building.

As the centuries roll by, the number of wrecks we know about increases. By the 1st millennium AD, they become much more plentiful, as remarkably demonstrated at Tantura Lagoon in Israel. Between 1994 and 1996, the INA, together with Texas A&M University and Haifa University, excavated evidence from seven wrecks dated from the 4th-10 centuries AD, and the 18th century – in an area roughly the size of two tennis courts.

The lagoon is one of the few natural harbours along Israel’s extremely straight and shallow Mediterranean coastline. Its protected waters served as an anchorage for Tel Dor, one of the largest ancient mounds in Israel, as well as for Dor’s immediate environs. Since this region has been almost continuously inhabited for 4,000 years, few other Mediterranean ports have the potential for hiding remains from such a breadth of history.

During excavations, the team uncovered remains of seven different hulls, among them the Tantura B shipwreck pictured opposite above. To find them, they used a hydraulic probe consisting of a pipe connected by a house to a pump. This proved to be an effective method for locating waterlogged timbers buried up to 2m beneath the sand. Trenches sunk over the timbers revealed buried hulls and in two cases, the archaeologists located lead-filled wooden anchor stocks – which, in this area is the archaeological equivalent of finding ‘needles in a haystack’.

The book draws to a close with a feature on Bass’ work on the Titanic – one of Bass’ last projects before he retired. ‘Then we arrived at the bow, which is magnificent, stunning – and unimaginably huge’, writes Bass. This was, without doubt, one of his most physically daring and awe-inspiring underwater investigations.

From the Bronze Age through to the modern Industrial era, Bass’ volume, is a heady sweep through the annals of underwater archaeology. Published in the accessible Thames and Hudson style, Beneath the Seven Seas is an entertaining, clear, and well-presented book that is a joy to read – even for those who typically shun underwater archaeology.