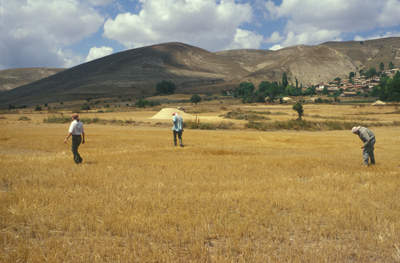 For the Hittites of the Late Bronze Age it was a difficult, wild country where the restless Kashka people lived. For the Romans, it was a hostile highland zone harbouring the Mithridatic kings who battled Rome for over 200 years, until the region was finally incorporated within the empire. And in the Byzantine period the elite court of Constantinople regarded the area as a backwater, a place for the safe exile of religious dissidents, and a good source of eunuchs and bacon.

For many years, the Turkish region of Paphlagonia was equally overlooked by archaeology. Prior to 1997, when I decided to remedy this by starting a programme of multi-period survey in this beautiful and seldom-visited part of Turkey, surprisingly little fieldwork had been conducted. Only around a dozen archaeological sites were known across an area of 8,500km², roughly the size of Crete. Working on behalf of the British Institute of Archaeology at Ankara (BIAA), our survey area comprised the modern province of Çankırı, which spans the transition from the Anatolian plateau to the south to the severe Pontic mountains and the Black Sea to the north. Although only a couple of hours drive north from Ankara, this stunning and highly varied region receives very few visitors, either Turkish or foreign.

Fieldwork in Project Paphlagonia took place every summer between 1997 and 2001, and the final publication is now available in both book and web-site form. In total, 337 sites were located and recorded during the survey, representing a huge leap forward in the quantity and quality of information with which to approach the past of this distinctive part of the ancient world. The sites range from Palaeolithic flint scatters to entire Roman towns, from Hittite fortified outposts to Hellenistic rock-cut tombs, and from Iron Age burial mounds to Byzantine monasteries, and much else besides, all emblematic of Turkey’s rich and diverse archaeological heritage.

The earliest occupants appear to have been small groups of Neanderthal hominins who arrived around 100,000 years ago. Camping by lake-sides, they hunted game drawn to the water, and chipped their distinctive stone tools in the Levallois tradition. This knapping technique involved reducing a large nodule of flint into a tortoiseshell-shaped core. The centre of this was then struck off, creating a flake whose sides had already been sharpened when the flint was trimmed down. After these hunter gatherers departed, there is a very long gap before the next evidence for human activity in the region.

The absence of any evidence for the Neolithic early farming communities that are so well-attested across south and central Turkey at sites such as Çatalhöyük (see CWA 41), Can Hasan, and Asıklı Höyük is particularly striking. The apparent absence of Neolithic people in northern Turkey is conspicuous in the light of the steady spread of farming communities from the Near East westwards into Europe over a period of several millennia from 9,000 BC onwards. This may just be an absence of evidence, but it does appear increasingly likely that the often harsh and occasionally densely wooded environment of Northern Turkey was shunned by early farmers seeking easy terrain to plough and sow.

During the Chalcolithic (6000-3000 BC) and Early Bronze Ages (3000-2000 BC) the human occupation of the region, as with all of Turkey and the Near East, steadily increased. One common theme during these periods is the location of settlements close to natural sources of salt, copper, and obsidian – a volcanic glass used for making very sharp tools. These were clearly highly desirable commodities, dangerously desirable perhaps.

Even in the Early Bronze Age some of the sites, though small, were fortified with dry-stone walls, suggesting that control of these natural resources did not go unchallenged. Where the threat was coming from is unclear, but clearly the Paphlagonian countryside could already be a dangerous place.