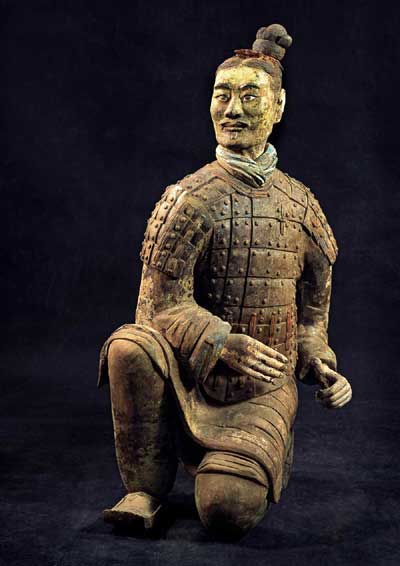 The British Museum’s new blockbuster exhibition, The First Emperor, China’s Terracotta Army is a triumph. The exhibition is magnificent, beautifully displayed with exemplary signage and including some of the latest discoveries. The actual exhibits from the terracotta army are limited, with fewer than 30 figures on show. However, the statues are rather better exhibited here than on-site in China. In China one is awed by the sight of hundreds of figures lined up but one has to view (most of) them from above, in darkened rooms, looking down into trenches. At the British Museum one sees well-lit material face-to-face and close-up.

The objects reveal the genius of Qin, the first emperor, a magnificent conqueror who, after the period known as the Warring States, succeeded in turning China into a single entity; his empire, however, survived barely a dozen years after his death and was replaced by the Han dynasty. He thought he was going to be immortal and took numerous medicines to keep himself alive, but, just in case they were to prove ineffectual, he had a huge pyramid shaped earthen barrow built, under which he would be buried. This barrow has never knowingly been excavated. He also had a terracotta army constructed a kilometre away to protect it. His biographer Sima Qian, writing a hundred years later, and concerned like all the Han dynasty to represent the first emperor – probably quite correctly – as a cruel despot, talked at length of the tomb but did not mention the terracotta army, which was therefore unknown until it was discovered by accident by a farmer in 1974.

The statues are quite astonishing; there was nothing like them before in Chinese art nor did they have any successors. They appear individualistic but in fact they are a victory of mass production. Made of clay, the figures were built up from standardised components of bases, limbs and torsos with hands and heads added later. There are about a dozen basic models but each figure off the production line was then given an individual finish, so they vary. The figures are stamped with the name and unit of the foreman or group of workers – a system of quality control. Interestingly, the same names also appear on the sewage pipes found in the domestic structures of the same period, suggesting that figures and pipes came off the same production line. Such material is also included in the exhibition. Indeed, the exhibition excels in its breadth – not only do we discover how the statues were made, who made them, and how they might have looked in antiquity (brightly painted), but we also get some of the most recent finds including newly-discovered acrobats and birds.

A question of space

However, the exhibition is already a victim of its own success. It is apparently more or less fully booked until the New Year, but it lasts until April 2008, so if you hurry and book now you may just be able to visit in February or March. In order to meet the demand the Museum is planning to extend evening opening hours to 8.30 on every day of the week, instead of just Friday and Saturday. The exhibition also highlights one of the British Museum’s recurring problems: that despite appearances it just does not have the space for blockbuster exhibitions. The main exhibition space is in the south-west corner of the museum next to the director’s house – go in the main (south) entrance and turn left. However, this contains nowhere near enough space for a major exhibition. The new exhibition therefore is being held in a new place, that is the old Reading Room at the centre of the Great Court.

Ever since the British Library moved out there has been a problem as to what to do with the old Reading Room at the centre. It is not only architecturally magnificent, at least in the interior, but it is also resonant with history. This is where Karl Marx famously wrote Das Kapital and plotted the downfall of capitalist civilisation. The answer was to turn it into a new sort of reading room with a collection of books donated by Paul Hamlyn that were all relevant to exhibits and themes in the Museum.

This has not been a great draw so Neil MacGregor, Director of the Museum, turned his eye to the Reading Room to reconsider its use. It is here that the exhibition has been cleverly inserted at a first floor level preserving the reading desks below. This covers just over 1,000 square metres making it 50% bigger than the usual exhibition space. Even this is not large enough, as the exhibition is proving.

Currently there are plans afoot to find a new space for temporary exhibitions and attention is being turned to a space known as the Old Bindery which is at the north-east corner of the Museum, i.e. go in through the north entrance in Montagu Place and turn left. Discussions are taking place within the Museum as to whether this could be turned into a new exhibition hall and conservation centre. Indeed even this may not prove large enough; should they not be looking outside the Museum, in the area to the south behind the Museum Tavern where plans to build a new extension in the old Post Office sorting centre were rejected a dozen or so years ago. Should they not be revived? Finally for readers of CA and CWA, two pieces of advice. Firstly if you want to go, book up quickly. Secondly when you get into the exhibition, walk straight through to the far end where all the terracotta figurines are. When you have feasted your fill on them, then retrace your steps and see the first part of the exhibition dealing mostly with the lead up to the terracotta army, with smaller exhibits from several smaller provincial museums in China. Good luck and enjoy it.