Cannibals and missionaries on the Martyr Isle

Within hours of stepping ashore, the 19th-century missionaries were dead, their bodies cut up and eaten by local chiefs. Undeterred – or perhaps inspired – more followed. They met a similar fate. James L Flexner ventured to this tiny, far-flung island to discover what remains of this turbulent time. 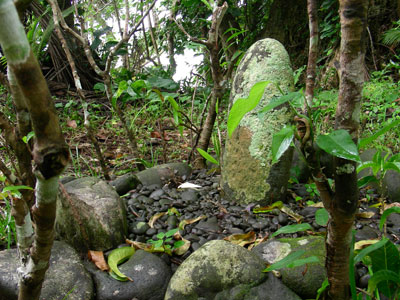 Missionaries called it ‘the Martyr Isle’. In 1839, John Williams and Jacob Harris landed on the beach at Dillon’s Bay, Erromango, in what was then known as the New Hebrides (now Vanuatu). Unfortunately for them, what Williams and Harris did not know was that just weeks before their arrival an Australian sandalwood trader had brutally murdered two boys, the sons of a local chief. As a result, the local people had resolved to violently repulse all contact with white people. If Williams had stayed on the beach, he would have been fine. But he was determined to proceed inland. His aim was to establish friendly relationships with the local islanders and to sow the seeds for the more difficult work of conversion by the London Missionary Society. So Williams, followed by Harris, pressed on, and in doing so unwittingly broke a powerful taboo.

The two men passed an important ritual marker made of lashed tree branches that signified the point beyond which foreigners could not pass. Williams either did not see or did not understand the sign, and as he stepped across, he was ambushed by local warriors, who chased them both back towards the beach, where they were bludgeoned to death and later ritually cannibalised.

Williams’ body was carried to a spot just inland – now marked by a red-leafed lompot plant – and on to a limestone staircase, built by the river for loading and unloading trade goods. At the uphill part of the staircase is a semicircular structure built of lime mortar, with brick of a distinctive bright orange colour and coarse black temper inclusions. From here, the body was taken to a large limestone boulder. The body was laid out and small cupules were pecked to mark the location of Williams’ head, hands, and feet. Later, a small brass plaque was placed on the stone to commemorate the location.

The body was then taken to another limestone boulder closer to the water, where it was divided among local chiefs to be cooked and ritually eaten. His skull was taken inland and later buried in an area now marked by a rotting coconut palm in a grove of larger mango and banyan trees.

One surprising feature uncovered during the documentation of this landscape is what may be a stone-lined grave with a metal bracket for a headstone. As no excavation has yet taken place here, we cannot say for sure if it is a grave; however, its presence in this area is notable given that there was 19th-century occupation on the south side of the Williams River.

The story of Williams’ death caused a sensation back home and made headlines around the world. Yet, far from discouraging potential missionaries, it only fuelled evangelical fervour as the mission passed from the London Missionary Society to the Presbyterian Church. Cannibalism was a matter of morbid fascination for many Europeans, as well as a crucial marker of difference, used as an ideological crutch to remind Westerners of their superiority. The apparent violence of non-Western people was used to legitimise the violence of imperial domination.

Of course, we now recognise that Melanesian people were more than simply ‘cannibals’, but it took a long time for Westerners to acknowledge the significant accomplishments of these islanders in agriculture, environmental stewardship, society, and the arts. Ironically, the missionaries themselves were often the first grudging admirers of Pacific Island cultures. Nonetheless, the early history of cannibalism at Dillon’s Bay did leave a lasting mark on local history and is remembered by living Erromangans today.

The Martyr Isle lived up to its name: a further four missionaries died in the field on Erromango, either killed by tropical diseases – James MacNair in 1860 – or murdered by local warriors – George Gordon and his wife Ellen in 1861, and George’s brother James in 1872.

Finally, Hugh Angus Robertson succeeded where his predecessors had failed. He settled at Dillon’s Bay in 1872 and his Erromanga: The Martyr Isle remains the classic account of mission history on the island. However, local people have their own version of this history, passed down orally through the generations, which often provides a different perspective than that preserved in the missionary accounts.

Archaeologists on a mission
There is also a material legacy of these encounters, in the form of the artefacts, structures, and landscapes in and around the mission stations. Archaeologists are exploring these lines of evidence in partnership with local communities in southern Vanuatu, to discover the nature of the interaction between missionaries and Pacific Islanders in Island Melanesia during the 1800s and early 1900s.

Now, we have started to investigate the early mission sites here on Erromango. The island is located in the southern province of Tafea, and lies just north of Tanna – the island that is home to the John Frum cargo cult and to Yasur, one of the world’s most active volcanos.

Erromango is also volcanic, though dormant since the Pleistocene period. The population of the island was estimated at roughly 5,000 people in 1860, but may have started to decline towards the end of the century because of the impact of Old World diseases. Today the number is closer to 2,000.

The first European to visit Erromango was Captain Cook, who stopped off briefly during his second exploratory expedition to the Pacific in 1774. Peter Dillon established the first foreign settlement in the bay that now bears his name in 1828, after discovering sandalwood on the island, a valuable commodity for trade with China. About a decade later, John Williams made his fateful landing at Dillon’s Bay. It was his death that, arguably, sparked the determination to establish a mission on Erromango, driven by ideas about the ‘uncivilised’ state of this island of ‘cannibals’, and by concerns about the unwholesome influences of the sandalwood and labour trades.