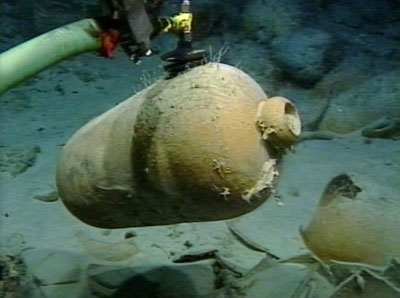 Shipwercked off the Florida Keys

In 1622, the Tierra Firme fleet, laden with gold, silver, pearls, and rats, was sunk off the Florida Keys. Sean Kingsley and Ellen Gerth describe 20 years of research into the world’s first deep-sea wreck excavation, and discover a time capsule of daily life from the dying days of Spain’s Golden Age.

One of the richest Spanish treasure fleets ever assembled sank in a ferocious hurricane off the Florida Keys on the 5 and 6 September 1622. The Nuestra Señora de Atocha and Santa Margarita were brimming to the gunwales with three million pieces of eight, silver ingots from the colonial mines of Bolivia and Mexico, emeralds, and crates of Colombian gold. Four of the ships were grounded on the Marquesas Keys and the Dry Tortugas; another three or four never reached shore. The loss of these vanished fleet vessels broke the bank of Spain.

The crystal-clear waters of the Tortugas Triangle are strewn with the broken backs of more than 240 ships, and it was here that Greg Stemm and John Morris believed they would find one of the lost 17th-century Spanish galleons.

The survival of a Spanish shipwreck in these deep waters was not in doubt. In 1965, a fishing boat called the Trade Winds, trawling for shrimp, snagged its nets on the seabed and came to a shuddering halt. When the badly ripped nets were pulled in, the crew found three intact Spanish olive jars, metal artefacts, and pieces of ship’s rigging and wood.

Locating the source of the fishing hang was a daunting prospect. The mystery wreck lay well below diving depths in 400m (1,312ft) of water, 20km (12.5 miles) offshore beyond the sight of land. Stemm and Morris’s company, Seahawk Deep Ocean Technology of Tampa, Florida, started a side-scan survey search in spring 1988, and eventually landed on a pile of olive jars and wood in April the following year. From the beginning, they knew that the success of finding the lost ship would ultimately prove to be the easy piece of the jigsaw. Stemm wanted to document the archaeology of this deep-sea wreck scientifically, a feat never done before at such depth. To achieve his goal, the team would have to invent a new discipline, one that replaced human divers with robots, and underwater drawing slates with the nascent world of computers.

World’s first deep-sea dig
In 1989, Seahawk ordered a $1.8 million Remotely Operated Vehicle (ROV) to be customised in Scotland to work archaeological magic. They called the robot Merlin, after the wizard of Arthurian legend, and set out with great expectations to the Tortugas wreck in June 1990. The three-ton robot, launched from the 64m-long (210ft) Seahawk Retriever research ship, would need to serve as the eyes of the archaeologist in pitch-black water, and as his hands, replicating shallow-water techniques of excavation, sieving, recording, and recovery.

Merlin was fitted with two titanium manipulator arms capable of lifting up to 226kg (498lbs) each, a suction dredge for stratigraphic excavation, and positioning systems. Six hydraulic-powered positioning thrusters allowed the ROV to hover above the sea floor when working, as if in suspended animation. A Sonardyne long baseline acoustic navigation system enabled the precise positions of all artefacts to be mapped in situ with custom-designed data-logging software. Technical and archaeological ROV activities were recorded using live video and vertical and horizontal colour and black-and-white photography.

A crew of three technicians operated Merlin from the control room onboard the Seahawk Retriever under the supervision of offshore project manager John Astley and archaeologist David Moore. Video was relayed via fibre-optic cable to the control room, where three 30-inch video screens provided a 180∞ panorama of the underwater excavation. Pilots watched events on the sea floor live on monitors, and commanded the ROV’s manipulator arms using joysticks at the control console.

The most resourceful custom-made modification was the attachment to Merlin of a 5cm-diameter (2in) suction cup that could pick up the most delicate ceramics and olive jars without damage. Stemm and Astley adapted the idea from money-printing presses that used similar technology to lift freshly printed dollar sheets. This limpet suction recovery system has now become the standard tool of deep-sea artefact recovery, imitated worldwide.

Even more innovative was a piece of kit dreamt up by Stemm and Astley to sieve for small finds that might otherwise have been lost in discharged sediment. A dredge receiver attached to the rear of the ROV was built from two 18-gallon stainless steel pressure beer barrels into which excavated spoil was filtered via a 25 horsepower hydraulically driven water pump. The weight of small finds diverted them into the sieve system, while sterile sediment was discharged away from the site through an external exhaust.

Quantity, however, tells only a small part of the Tortugas shipwreck story. What is missing from the shipwreck is equally illuminating. The 209 olive jars were not cargo but had been filled with homeward-bound shipboard supplies, which leaves unresolved the question of what the Tortugas ship had been transporting. Finally, what was the name and background of this mystery merchant vessel? After 20 years of interdisciplinary research we finally have the answers.