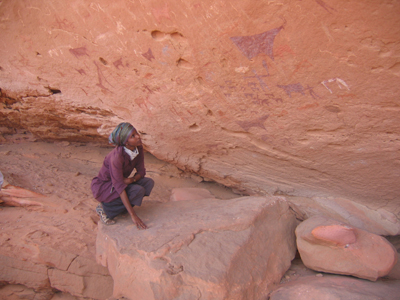 Somaliland is not Somalia. Somaliland is in the northern part of Somalia, occupying the area of a former British colony. After gaining independence in 1960, it joined with Somalia Italiana to create modern Somalia. But whereas Somalia is wracked with civil war and crippled by piracy, Somaliland has remained peaceful. Now it has re-asserted its independence. Yet despite boasting a stable, grass-roots democracy, the country has not been recognised by the UN and so does not formally exist, leaving it a breakaway state teetering on the edge of a violent region. However, its heritage puts it firmly on the archaeological world map. Few people, either inside or outside Somaliland, are aware of the riches it contains, so I want to tell you about my archaeological work in post-conflict Somaliland.

I was born into turbulent times. In 1978, when I was two, my family moved from our home in northern Somalia to Mogadishu, the capital of Somalia. My father, who came from a camel herding family, won a Russian military scholarship and spent several years in Russia. Once trained, he was thrown into the brutal war in Ethiopia. The war did not go well: he was seriously wounded, placed under house-arrest in Mogadishu, tortured by supporters of Siad Barre – the military dictator who had come to power following a coup in 1969 – and denied access to medical aid. My father died in 1989. By then many people were fleeing Somalia to escape the massacres. My family left in 1991 and, after a year of wandering, we arrived as refugees in Sweden.

The Swedes are justly proud of their Nordic heritage, and I began wondering who are these Vikings that everyone talked about, and for the first time I realised the importance of the past to a people’s identity. Around the same time, I came across a book titled Africa: the Story of a Continent by the British historian Basil Davidson. This was a turning point for me, and I began to ask, ‘What is Somali heritage? What is Somali history and archaeology?’ There was nowhere I could study this, but by attending courses on African Archaeology at SOAS and University College London, I developed the skills I needed to find out for myself. Since graduating I have become Director of Antiquities in Somaliland, and devoted myself to Somali heritage. This is what I have discovered.

Few countries are as prominent on a map as Somalia. It is the Horn of Africa, jutting out into the Indian Ocean from the highlands of Ethiopia, with the Red Sea and Arabia to the north and the Indian Ocean to the east. Somaliland lies on the north-western half of the horn, and covers an area slightly larger than England. The terrain is varied, and there are mountains, forests, fertile plains and desert. Precisely when humans first settled there is uncertain, but there is ample evidence that they have been carving a living out of the region for thousands of years. Some of these early inhabitants have left striking and beautiful traces of their presence.