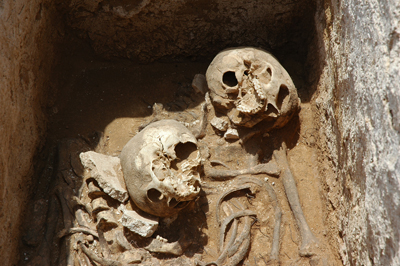 Sicily was best known during the Roman Republic as the breadbasket of Rome. Although she never reached such dizzy heights again (Africa and Egypt seized the role of Rome’s main grain suppliers), the province remained quietly prosperous throughout the Roman Empire and beyond. The dazzling late Roman villa near Piazza Armerina, with its vast array of colourful mosaics, is testimony to the wealth that could be made from Sicilian agriculture. Yet archaeologically we know little about the economic basis of Sicilian prosperity. There are countless instances of Roman and early Byzantine agricultural villages all over the island, but few have been explored. In 2008, I put together a team to look at one in more detail, hoping to understand better both its local economy and Sicily’s role in the wider trade networks of the Mediterranean world. We did, indeed, learn much about these – and, in addition, found unexpected evidence for funerary feasting.

The site we selected was a late Roman and early Byzantine village near Punta Secca in Ragusa province, south-east Sicily. It was discovered in the 1960s when holiday homes were springing up along this stretch of sandy coastline. Archaeologists led by Paola Pelagatti, of the Syracuse Archaeological Superintendency, identified 25 buildings forming a straggling, disorganised village strung out along the coastal strip. She believes that this was ancient Kaukana, the place where the Emperor Justinian’s general, Belisarius, set sail to conquer Africa in AD 533. The evidence is inconclusive, but the name has stuck, and the site is universally referred to as Kaukana (or Caucana) today.

One of the ancient buildings excavated by Pelagatti was a little church, with burials in the narthex, in one aisle, and round the back of the apse. Most of the other structures resemble houses, with rooms arranged around a central light well or open yard. Some had a staircase leading to an upper storey. One excavated dwelling, in danger of slipping into the sea, proved spectacular: even the lower parts of two first-floor doorways survived. Pelagatti’s successor, Giovanni Di Stefano, has continued digging the church and tested a couple of other structures too. But the 1960s and early 1970s research was primarily intended to demonstrate where modern houses could be erected, and where they could not. For most of the ancient buildings, this involved exposing no more than the tops of the walls – enough to establish the ground plan but little else.

We set out to excavate one of these structures completely, and to learn about its function, its development over time, the sorts of pottery and amphorae used there, and the diet of its inhabitants. We also wanted to test the chronology: Pelagatti suggested on coin evidence that the village was occupied from the mid-4th to the mid-7th centuries AD. We not only gained new data in answer to all these questions, but a lot more too.

The building we selected, Pelagatti’s Site 6, appeared to be a ‘standard’ house, with four ‘rooms’ opening off a larger yard. It measures about 19m by 13m, and appeared untouched by earlier work. How wrong we were! First geophysics revealed a line of buried 1960s water-pipes. Then, our excavations showed that a contemporary bulldozer had, in a single sweep, ripped into the heart of the building, demolishing everything in its path. The reckless contractor sought to make amends by rebuilding the external south wall (rather skilfully, in fact – it fooled us, until we noticed traces of tell-tale modern mortar). But the rest of the dwelling escaped unscathed, and by the end of our excavation in 2010 its walls, freed of the wind-blown sand that had shrouded them for 1,400 years, stood almost 2m high.

Three seasons of excavation (2008-2010) have shown that the building underwent six different construction phases. They seem to have occurred in very rapid succession, because one of the surprises was the comparatively small amount of occupation debris recovered from this late antique dwelling – John Hayes, our ceramicist, says that he would have expected about twice as much! The reason is quite simply that its occupation was short: both pottery and coins suggest that the building was built, adapted, and abandoned in the space of just 50 or 60 years, from around AD 580/600 to 640 – rather later than we expected when we started the dig. Throughout its life, the building’s occupants were called upon to battle one commodity there was no shortage of: sand. This ever-encroaching menace threatened to smother their home.