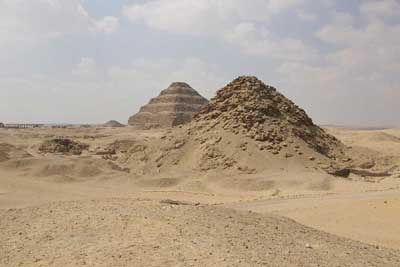 Saqqara, the principal cemetery of Egypt’s erstwhile political capital of Memphis, is famed for its Old Kingdom pyramids. However, the site also hides numerous later graves. Among them are important tombs from the time of Tutankhamun, as Aidan Dodson reveals.

Saqqara was the main cemetery of the city of Memphis, Egypt’s former political capital. Located some 30km south of modern Cairo, this crucially important site is dominated by pyramids and mastabas (or flat-topped rectangular tombs). All were built during the ‘Old Kingdom’, an era spanning the second half of the 3rd millennium BC and often dubbed the ‘Age of the Pyramids’.

Inevitably, early exploration at Saqqara focussed on these impressive pyramids and mastabas. But there is much more to Saqqara than its famed Old Kingdom pyramids. Thus, archaeologists have long been aware of Saqqara’s New Kingdom tombs that date from the late 2nd millennium BC, a time when Egypt was a world power ruled by such well-known kings as Tutankhamun and Rameses II. This material first came to light in the early 19th century when plunderers working for the European consuls removed blocks and statues dating to the New Kingdom. In the 1840s the Prussian Egyptologist Richard Lepsius recorded parts of a few New Kingdom tombs from this era.

Other tombs of the period were also found during the 20th century, but it was only from the 1970s onwards that archaeologists began to scientifically uncover monuments of the New Kingdom. The results have been fascinating, and include the discovery of a number of tombs associated with the boy-king Tutankhamun. But what, precisely, have the archaeologists found, and how do they link these tombs with the young Pharaoh?

A mighty grave, but whose?

Our story starts in 1975, with a joint expedition between the Egypt Exploration Society (EES) and the Rijksmuseum van Oudheden (National Museum of Antiquities – RMO), Leiden, the Netherlands, directed by Geoffrey T Martin and Hans Schneider. They began excavations in the area in which Richard Lepsius had reported a number of tombs (area A on the map). When the archaeologists arrived, they found a desolate area south of the causeway of the Old Kingdom pyramid of Unas (mid 24th century BC).

Nonetheless, it was here that Lepsius had apparently found the tomb of Maya, the Treasurer who served the Pharaohs Tutankhamun and Horemheb in the late 14th century BC. Impressive statues of Maya (now in Leiden) had certainly come from the Treasurer’s tomb, so re-locating Maya’s tomb was an obvious starting place for the Anglo-Dutch research. But where exactly was it?

Using Lepsius’s old map, the team hoped to rediscover the tomb itself and find out exactly where the statues had once lain. Having identified the probable spot – area A1 on the new map – work began. Soon, part of a tomb appeared under the sand. But it belonged not to Tutankhamun’s treasurer; rather, the archaeologists had found the resting place of someone else connected to Tutankahmun, and someone far more important.

In fact, they had found the tomb of the General Horemheb. This was the man who had acted as regent for the young Tutankhamun and who later went on to become king himself – as the last king of the Eighteenth Dynasty.

As befitted royalty, Horemheb had gone on to construct a new tomb for himself in the Valley of the Kings at Thebes. However, his old tomb at Saqqara had continued to be used to bury members of his family, possibly including his queen, Mutnodjmet, and even later became a focus for his posthumous cult.

The discovery of this tomb was a true surprise since it was regarded as one of the key ‘lost tombs’ of Egypt. Limestone blocks derived from Horemheb’s first tomb were in Leiden and many other museums, so many had assumed it was completely destroyed. In fact, it proved to be in much better condition than had been feared, with many decorated blocks still in place. Once excavation was complete, casts of the blocks in Europe were placed in their original positions, allowing whole walls to be restored to something approaching their former glory.

Despite this, many blocks are still missing, as indeed is the case with all the tombs in the cemetery. For as their owners became forgotten, blocks were taken away for other monuments, while after the advent of Christianity many pieces of stone were used in the building of the monastery of Apa Jeremias, whose site adjoined the cemetery. Then, with the first wave of Egyptomania in the early 19th century, illicit digging ripped many more elements from under the sand. Consequently, there are about 40 tombs that are now only known from fragments in museums. Discovering Horemheb’s tomb was therefore a sensation – but the tomb of Maya still remained to be rediscovered from beneath the sands. Would it be found or would it prove to be totally destroyed?

Work in this area is still underway (although the EES was replaced on the team by Leiden University in 1999, the dig today being jointly directed by Maarten Raven and René van Walsem) and over the past three decades, the archaeologists have found more than a dozen tombs in Area A. All are variants on a tomb-type known as a ‘temple-tomb’, typical of the New Kingdom. Below the tombs’ above-ground structures are deep shafts cut in the bed-rock that lead to underground corridors and chambers, the places in which the mummies of the tomb-owner and their family were laid to rest. Some of these substructures are quite elaborate. However, only one – located in 1986 – has so far proven to be decorated. Its burial chambers were carved with images of a man and his wife standing before the gods of the dead. The inscriptions revealed that this was part of the long-sought tomb of Maya.

Finally, only a few metres from where the archaeologists had searched a decade earlier, they had located the tomb of Tutankhamun’s treasurer. Alas, the contents of the tomb had been extensively robbed and very little survived from the original interments. Any remaining organic material had also been generally ruined by the high level of humidity that exists today underground at Saqqara.

At around the same time as the EES and RMO’s discovery of the tomb of Horemheb, a French expedition under Alain Zivie made yet another unexpected discovery linked to Tutankhamun: a whole hill-side of rock cut tomb-chapels at Saqqara (Area C).

Such chapels are a key feature of the New Kingdom cemeteries of Western Thebes, opposite modern Luxor in the south of Egypt. There they dominate the rocky hills that look down on the green fields that separate the land of the dead from the River Nile. Conceptually, such rock-cut tombs are no different from other ‘temple-tombs’, comprising a richly-decorated ‘public’ area, where friends, relatives and priests placed offerings to the dead, and a closed substructure for the dead themselves. The only difference is one of topography, and examples exist whereby the innermost part of the tomb is rock-cut, but with outer courtyards built in the same way as those of a ‘temple-tomb’.

Many years earlier, the pioneer Egyptologist Flinders Petrie had noted the rock-tomb at Saqqara of a Vizier with the unusual name of Aperel. Now, Zivie and his team cleared the tomb, discovering not only a once-finely decorated chapel, but also that the remains of some of its occupants and their coffins remained in its substructure. It lay in the escarpment to the south-west of Teti’s pyramid, offering an unrivalled view over what was once the city of Memphis. As excavations continued, it became clear that the whole escarpment was riddled with rock-tombs contemporary with the New Kingdom material that the Anglo-Dutch and Egyptian teams were finding further south.

The French work was hampered, however, by the fact that a millennium after the tombs had been built the area had been converted into the burial place of mummified cats. These had been brought by pilgrims to the sanctuary of the cat-goddess Bastet, and periodically gathered up by the priests and buried in these old tombs, which had, in some cases, been extended and subdivided to convert them into feline catacombs. This meant that the structural integrity of many sepulchres was marginal at best, and at one point French engineers working on the Cairo Metro were brought in to shore up collapsing underground chambers.

In spite of these very real hazards, Zivie’s team has emulated their British and Dutch colleagues in uncovering tomb after tomb: the current total is around 30. In 1996 the tomb of the Lady Maya (Maya was a unisex name) came to light with, miraculously preserved on a piece of broken wall, an image of the young Tutankhamun sitting on the tomb-owner’s lap. Maya had been the king’s nurse and tutor.

So it is that we now have a wide range of people associated with the boy-king, including his tutor, his nurse, and even the general who ruled in his name, whose original tomb had long been lost, and assumed destroyed. Despite it being more than three decades since work first began at Saqqara, the New Kingdom tombs continue to reveal their secrets.