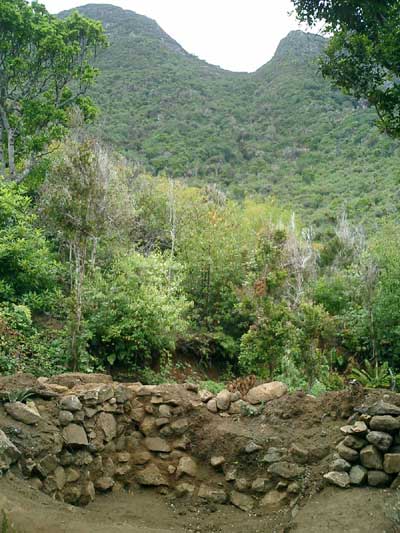 It was not much: two simple hearths, three small postholes, and a fragment of pointed bronze. But it was found on Robinson Crusoe Island. And it was almost certainly the hut of the world-famous castaway. Excavators Daisuke Takahashi and David Caldwell report.

As Europeans pushed out from their homelands to other parts of the world, they found human cultures almost everywhere they went. One of the rare exceptions was the tiny Juan Fernandez Archipelago in thePacific Ocean, the main island of which, now calledRobinsonCrusoeIsland, was first sighted by a Spanish pilot, Juan Fernandez, in the late 16th century. Its climate is mild, and there are abundant supplies of water and food, including berries, fish, seals, and lobsters. Admittedly, access to this rock-girt speck of land, 15 miles by 5, is difficult, and much of it is mountainous, but humans have readily colonised much worse.

Investigations on the island by Chilean and New Zealand archaeologists failed to find any evidence for a human presence before the 16th century, whether Polynesians or people from mainland South America, some 400 miles to the east. The second largest of the three islands in the archipelago, now called Alexander Selkirk Island, lies about 100 miles west of Robinson Crusoe  Island. A sediment core from here provides evidence for the impact on local vegetation since the late 16th century of goats abandoned by the Spaniards, the burning of forests, and the spread of introduced species – but nothing of earlier date that could be interpreted as human intervention. This picture parallels what we know about Robinson Crusoe Island.

AlexanderSelkirkIslandhas remained unsettled, with only seasonal occupation by fishermen. Robinson Crusoe Island, on the other hand, today has a population of about 500 Chileans, whose ancestors first arrived in the mid 19th century to fish for lobsters. They are concentrated in thevillageofSan Juan Bautistaon the edge ofCumberlandBay, the only relatively safe anchorage for ships.