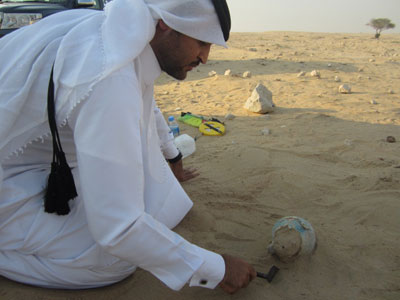 Qatar formed part of the ‘southern route’ out of Africa across the Arabian Peninsula when, at the height of the last Ice Age, much of the Arabian Gulf was open landscape. Now, pioneering research is looking for traces of those earliest migrations, as Kirsten Amor reports.

The adventurous archaeologist Beatrice de Cardi, visiting the Gulf in the 1970s, noticed a striking similarity between the Neolithic pottery sherds she had found in Mesopotamia and those she had seen in the United Arab Emirates almost 1,000km (621 miles) to the south. Could there be a connection?
The pottery from Mesopotamia (modern Iraq) was later identified as belonging to the Ubaid period, between about 6,500 and 3,800 BC: de Cardi had established links between Mesopotamia and the Gulf that dated back more than 8,000 years, sparking a life-long interest in this region and leading to the discovery of many new archaeological sites in Qatar (see CWA 10).
Now, the Qatar Museums Authority is collaborating with the University of Birmingham on the Qatar National Historic Environment Record (QNHER) Project, which is using pioneering techniques to follow up the ground-breaking research de Cardi initiated 40 years ago.

Prehistoric clues
Archaeological sites in Qatar have not been disturbed by intensive agriculture and, unlike much of the Arabian Peninsula, the country is not covered by large sand seas. This means that often even after millennia, prehistoric remains are evident on the surface.
Recent surveys in northern Qatar by the Qatar Museums Authority have recorded more than 4,000 previously unknown archaeological sites. More than half of these sites were former settlement structures, enclosures, wells, temporary mosques, and Bedouin camps. Other features included prehistoric burial mounds, Islamic graves, prehistoric flint scatters, and findspots of pottery.
In 2009 terrestrial survey discovered a flint scatter on the edge of a valley in north-west Qatar known as Wadi Debayan. A wider surface search has recovered more than 1,500 lithics, five obsidian fragments, and over 180 shards of Ubaid pottery. With its elegant greenish-buff appearance, Ubaid pottery is very finely made, often with geometric designs on the exterior, and painted using a distinctive black slip. The high quality of the pottery belies the fact that it was first traded in the region over 7,500 years ago.
Significantly, source-analysis on fragments of worked obsidian shows they originated from eastern Turkey, a testament to extensive Neolithic trade links between eastern Turkey, Mesopotamia, and the central Gulf region more than 7,000 years ago. Many of the lithics are diagnostic of bifacially worked tools that are a technology particular to the Arabian Peninsula.
While the site is now approximately 4km (2.5 miles) inland, marine sediments dating to over 6,000 years ago suggests that when the site was occupied during the Neolithic period it was by the coast, and the sea level has subsequently dropped by more than 2m (6ft) to its current level. Organic-rich layers in the test pits also suggest a favourable environment between 6,000 and 5,000 years ago, possibly with more rainfall and increased vegetation. This period also seems to have coincided with one of sea-level stabilisation and intertidal vegetation.
The rich resources available to the Neolithic people occupying the site are demonstrated by the presence of a midden which survives to a height of almost a metre (3ft) and is dated to between 5,200 and 4,500 years ago, when the site would have been coastal. It was discovered on a raised beach and contains charcoal, extensive fish remains, and the bones of birds and small mammals. The midden was sealed by a layer of stone, which has ensured its survival. At first this layer puzzled the team. However, Environmental Manager for the project Dr Emma Tetlow believes it indicates a high-energy event like a tsunami in the Gulf at some point fairly soon after 4,500 years ago.
Excavations in the area of the original flint scatter have found evidence for multiple phases of post-built buildings, and several hearths from which a wealth of finds were recovered that included seeds, animal bone, shark vertebrae, flint, and a meteorite. Radiocarbon dates from the hearths put the earliest occupation in the area of the flint scatter at 7,500 years ago. Finds have also included more of the enigmatic Mesopotamian Ubaid sherds previously studied by Beatrice de Cardi.
Survey in early 2011 around the south-east coast of Qatar discovered a large cairn, which, on excavation, was found to be a domestic dwelling with phases of occupation from the 1st to the 7th centuries AD. The oldest phase of the building was a central room onto which two further rooms had been added. Around the exterior edges of the stone-built walls were the collapsed remains of their upper courses, still partially bonded together, lying on their sides.
Most of the pottery dates to the middle of the 1st century AD, and demonstrates evidence of links with the Parthian and Roman Empires, as well as trade links with India. Later horizons revealed layers of domestic waste including assemblages of animal and fish bone. It is likely that the building was abandoned for several hundred years, with radiocarbon dates on the latest horizons suggesting reuse in the 7th century AD.

Mapping the past
The QNHER project is also mapping the marine areas of Qatar, as well as conducting large-scale marine survey in the Arabian Gulf.
The Gulf is a relatively shallow sea, averaging about 35m (115ft) in depth. When the Ice Age was at its peak about 18,000 years ago, sea levels were more than 100m (328ft) lower than they are today, and this area was an open landscape. Even as late as 12,000 years ago, Qatar was on the edge of a large, dynamic river valley fed by a constant supply of fresh water from the Tigris and Euphrates rivers to the north.
Topographic data suggests there were two large freshwater lakes – known as the Western and Central basins. These would have provided vital resources of freshwater, flora, and fauna in this highly arid region. With the rise in sea levels between 12,000-8,000 years ago, the river and the two freshwater lake basins were inundated by seawater, terminating the land bridge with the rest of Asia.
With increasing evidence for a ‘southern route’ out of Africa and across the southern extent of the Arabian Peninsula, it is more than likely that Qatar’s link with Asia was part of that route. About 250,000km² (97,000 sq. miles)of land was lost to rising sea levels in the Gulf, and understanding this now-submerged area is key to understanding past populations and regional migrations. However, as this landscape is beneath the waves, exploration in the past was considered too challenging, and therefore beyond the reach of archaeologists.
This all changed in 2010 when the QNHER team was given access to more than 4,000km² (1,550 sq. miles) of 3D seismic, sidescan sonar, and other geophysics data from the offshore areas of Qatar by Maersk Oil Qatar and Qatar Petroleum. The team, led by Faisal Al Naimi (Qatar Museums Authority) and Richard Cuttler (Institute of Archaeology and Antiquity, University of Birmingham), is now using this data to map the area and build a timeline of rising and falling sea levels.