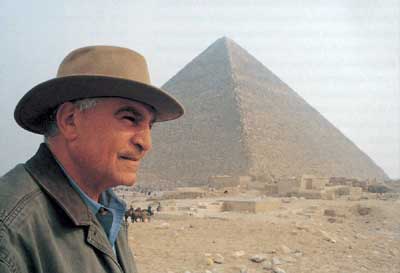 Zahi Hawass is Secretary General of the Supreme Council of Antiquities in Cairo, the most influential archaeological post in Egypt. Between 1987 and 2002 , he was the Director General of the Giza Pyramids, Saqqara, Heliopolis, and the Bahariya Oasis. Here, Hawass reflects on that eventful time.

It is dusk. The Giza plateau is empty but for the scattered guards who stand watch over the ancient monuments. The tombs and temples are quiet, abandoned by the long vanished families of the dead who lie just below the spot upon which I stand. The setting sun blazes a brilliant orange as it slips beneath the western horizon, illuminating for a moment the timeless symbols from which mankind takes comfort, beacons to those who seek the poetry of eternal life. The pyramids stand fast, unchanging and unmoving, although the bodies they were built to protect disappeared shortly after being put to rest.

It is my job to guard and protect these treasures, to preserve them for eternity. I am an archaeologist, supervising my own excavations at Giza, Saqqara, the Bahariya Oasis, and Heliopolis, as well as the work of foreign expeditions to all of the sites under my jurisdiction. It is not easy work but I have the strength for all these tasks because I love my work. It is my passion, my love, my reason for living.

Since 1987 I have carried out a number of important archaeological projects. At Giza, I developed a unique site management plan, and primarily as a result of this plan, I have made many wonderful discoveries, as illustrated on the above plan, and some of which I shall describe below. At Saqqara we have been working in the complex of the 6th Dynasty king Teti (c. 2345 2323 B.C.), where we have been clearing the complexes of two of his queens. We have made exciting discoveries, including the tomb of his crown prince, Tetiankhkem, and the pyramid of his chief queen, Khuit.

At Heliopolis my teams have been excavating and conserving two tombs of the 26th Dynasty (664 525 B.C.) And last, but far from least, we have made spectacular discoveries in the Bahariya Oasis, far out in the Western Desert, where we have uncovered an enormous Greco-Roman cemetery the Valley of the Golden Mummies and a number of important 26th Dynasty tombs .

The Giza Plateau
Of all the areas in which I have worked, the Giza plateau on the outskirts of modern Cairo, is one of the most extraordinary places in the world, and I feel its magic every day. Over a hundred pyramids have been found in Egypt, but the three kings’ pyramids at Giza, and especially the Great Pyramid of Khufu – the largest of all the pyramids – are by far the best known of these. These massive stone mountains and their companion, the Great Sphinx, dominate the horizon for miles around, and were built over a period of three generations, c. 2580 – 2503 BC, as monumental tombs for three specific kings.

As the director general of the Giza Pyramids, I developed and instituted a site management plan designed to focus primarily on conservation and restoration. It deals with issues of conservation and restoration, the management of tourism, the threat of urbanisation, the dangers of vehicular traffic, and a sensible plan for excavation. This is difficult, but vital work; without it the pyramids themselves would be in great danger.
One issue with which we have been dealing is that tourists are usually guided to only three places on the Giza Plateau, even though it is a large site with many wonderful monuments that are well worth visiting. Thus they enter the Great Pyramid, go on to the valley temple of Khafre, and finish with a visit to the Sphinx all in about two hours. This puts a great deal of pressure on these three areas, and the interior chambers of all three of the big pyramids at Giza have suffered greatly from the effects of tourism. Each visitor produces nearly an ounce of moisture with a high saline content through their breath and perspiration. This results in the accumulation of salt, which leeches into the limestone and plaster and gradually causes them to crumble into powder.

So, in 1998, we spent 12 months cleaning the salt – and indeed the recent graffiti – from the walls of the Grand Gallery of Khufu’s pyramid. In order to protect the interiors of the pyramids for the future, I then established a rotation system so that each year one pyramid is closed for cleaning and renovation, while the other one is open to the public. We have also opened more of the smaller pyramids and the tombs of the nobles, so that some of the pressure will be taken off the three large pyramids.

Discoveries in the Complex of Khufu
In addition to site management, I have been responsible for a raft of archaeological excavations on the Giza plateau. One of these areas is the Complex of Khufu. The central element of Khufu’s complex was the pyramid itself. Khufu’s architect, his nephew Hemiunu, planned the pyramid around a nucleus of bedrock, adding approximately 2.3 million quarried blocks of limestone, each weighing an average of two and a half tons. The exterior was cased with trapezoidal blocks of fine limestone that would have shone blazing white in the hot desert sun. The completed monument was originally a bit over 480 feet high (the top 31 feet are now missing), and the base covers a total area of about thirteen acres. The sides are inclined at an angle of 51 degrees, 52 minutes, and they are aligned very accurately to the cardinal directions.

Surrounding this pyramid are the remains of an elaborate complex that served the king for eternity. Nestled against the eastern face of the pyramid was a mortuary temple, of which only foundations and the remains of the basalt pavement can be seen today. A causeway leads east from the entrance of the temple across the plateau and toward the floodplain below. South of this temple, we discovered the foundations of a monumental building from the Old Kingdom that may be Khufu’s palace. We recently caught glimpses of a vast settlement at the foot of the plateau, the northern part of which may be Khufu’s pyramid city, also called the Horizon of Khufu. To the east of the valley temple, we found traces of a harbour.
East of the pyramid and south of the mortuary temple are three small pyramids that were built for queens, each with its own small chapel; a group of large mastaba tombs (a tomb with a low rectangular superstructure), built for members of the royal family; and, newly discovered at the southeast corner of the pyramid, the satellite pyramid of Khufu.

There are also five boat shaped pits to the east of the Great Pyramid. Two of the boat pits actually contain disassembled wooden boats that I think were solar boats for the king to travel across the sky to the afterworld. South of the pyramid are the remains of the construction ramp, which led from the quarry to the pyramid. To the west are mastabas belonging to officials and priests. East of the pyramid, and south of the subsidiary pyramids, are two north south embankments that may represent the remains of Khufu’s workshops, where construction tools, food for the cult, and cult objects would have been produced. The building of the Great Pyramid indicates how the King controlled the wealth and the population of the country, organising households all over Egypt to participate in the pyramid project by providing labour and food. Its creation also highlights the Egyptian achievements in architecture, science, astronomy, art, and mathematics.

Despite the importance of the Great Pyramid of Khufu, in the 1950s, a paved road for tour buses had been built, with little integrity, along the east face of Khufu’s pyramid (see photo previous page). I had always been appalled by this road, which ran far too close to the Great Pyramid and even allowed cars and buses to drive over some of its most important architectural features, including the basalt pavement of Khufu’s mortuary temple. We began to dismantle this road and in the process made several very important finds, including a boat pit that had been filled with sand in 1950 so that the paved road could run over it.

Who built the Pyramids?
Of course, it is the pyramids that dominate the Giza plateau. And the question of who built them, is one that I am often asked. Many people still believe that the pyramids at Giza were built by slaves forced to labour in the service of tyrants; they cannot imagine that people would voluntarily do the kind of work required to build these massive monuments. Hollywood has done its share to add to the confusion; many people have an indelible image, courtesy of Cecil B. DeMille, of lines of dusty slaves toiling in the hot sun under the lashes of harsh Egyptian overseers. This misconception persists; even now, I am often met with great surprise at my public lectures when 1 announce that the pyramids were built by native Egyptians who willingly offered their services to their god king.

Egyptologists have long known this fact. For example, from the New Kingdom site of Deir al-Medina we know that the artisans who carved and decorated the spectacular royal tombs in the Valley of the Kings lived comfortably with their families, owned property (including slaves), and took pride in their work. Yet traces of the workmen responsible for building the pyramids were, until recently, lacking in the archaeological record of the Old Kingdom.
However, we have now made a great discovery: the presence of hundreds upon hundreds of tombs of the pyramid builders. These belonged to the workers and overseers who built the pyramids. These were farmers sent from the provinces to serve their king for a set period of time, as today many nations have their young people serve temporary stints in the army. The wide variety of tomb styles may reflect their local traditions. There are also many women buried here, usually buried either with or next to their husbands.

The skeletons found in the tombs provide good information about their lives. The average height was between five and six feet, and the typical life span was thirty five to forty years (as opposed to fifty to sixty years for nobles at this time). Women under thirty had a higher mortality rate, probably a result of the dangers of childbirth. Simple and multiple limb fractures are found in skeletons but these have often been set, indicating that excellent medical care was available.
As we were working in the workers’ cemetery, we stumbled across the beginnings of a ramp outlined with low walls of limestone rubble. This ramp led directly to the upper part of the escarpment, where we found additional tombs, larger and more elaborate than those in the lower cemetery. From the inscriptions, we know that this is the cemetery of the artisans. There may be thousands of tombs left to uncover and we are currently working simultaneously in several areas.

During my career, I have found that the sand of Egypt hides many secrets, and each new discovery changes our understanding of the ancient world. My thirty three years of excavation have been exciting and fruitful, and I am proud to have added significantly to the store of information on which we base our interpretation of the past. But there are still more secrets buried in the drifting sand. I look forward to entering into newly discovered tombs and shafts, and revealing more of the magic of Egypt to the world.