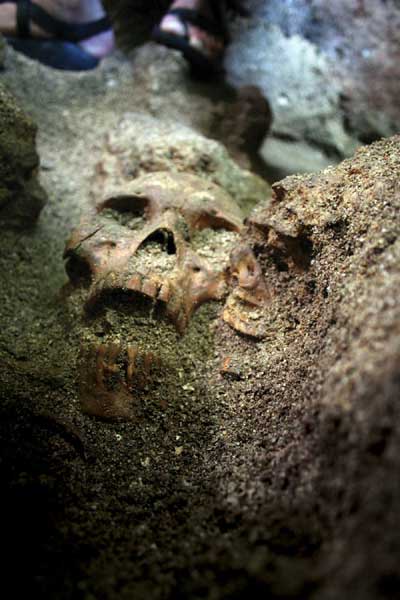 Dr Scott M. Fitzpatrick is an archaeologist from North Carolina State University, USA. He is also one of the world’s luckiest archaeologists: his work focuses on the Caribbean and Micronesia. Here, he takes us to one of his favourite archaeological sites in Palau, a Micronesian island nation set within the azure Pacific, 500 miles east of the Philippines and 2000 miles south of Tokyo.

Scott, aside from the sea, sand, and sun …what drew you to Palau?

I first visited Palau in 1997 as a graduate student. I was interested in why and how peoples colonised many of the smaller islands and archipelagos in Micronesia. I was, of course, struck by the beauty of the islands – particularly Palau’s limestone ‘Rock Islands’. But it was also immediately obvious there was lots of interesting archaeology.

Of particular interest are the massive stone disks, referred to as ‘stone money’, found in the Rock Islands. Many weigh several tonnes, and thousands were known to have been quarried by islanders from Yap (about 400km north of Palau) before and after European contact. The Yapese would sail them from Palau back to their homeland as part of an extensive exchange system. These disks are among the heaviest objects ever moved over open ocean in the ancient Pacific. My research focussed on three stone quarry sites. It was at one of these, Chelechol ra Orrak, we made an extraordinary find in 2000.

We began discovering lots of human remains. Initially, my Palauan colleagues and I thought the bones might be the remains of Yapese islanders who had died while carving or lifting the ‘stone money’, or perhaps the remains of WWII soldiers. In fact, we had run into a 3000 year old burial site – making it the oldest-known cemetery from Palau, and one of the oldest in the entire Pacific. During that season, we recovered the remains of at least 25 people, including adults, juveniles, and even unborn children. During 2002 and 2007 we uncovered a minimum of 10 other burials.

How did this work help answer your questions about island colonisation?

We realised that people must have been coming to the island a good millennium earlier than had previously been realised. Moreover, our work highlights how people were not living in isolated groups on islands with few resources. Indeed, the islands of Palau are some of the most biodiverse in the Indo-Pacific and it is relatively easy to travel between them – they are close together and fairly protected within the barrier reef.

What other secrets did your excavations reveal?

Our work has also helped to shed light on a recent debate over small-bodied humans such as the hobbits, or Homo floresienis (the hominin found in Indonesia, said to be a distinct and primitive human species, but one that survived until perhaps 12,000 BC).

Some researchers claim to have found equally small people buried elsewhere in Palau, also with ‘primitive’ biological traits, dating to c.800 BC-1000 AD. They suggested these were similar to H. floresiensis.

However, all other known human skeletons from Palau fall within the range of modern human variation. So I think in Palau we are seeing genetic variation in morphology or even juveniles, but not a case of insular dwarfism or even a separate species, as may be the case for H. floresiensis. This debate is likely to go on for some time!

What future plans are afoot?

I recently finished a programme for the Discovery Channel on Chelechol ra Orrak. We will likely go back next year to work on the cemetery site. There is always more to be done.