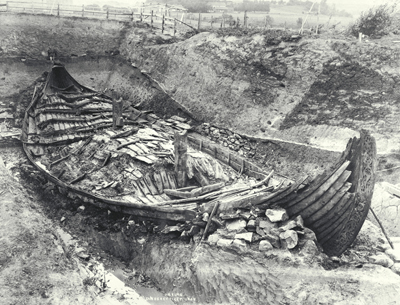 In August 1903 Gabriel Gustafson, director of the University Museum of Antiquities in Kristiana (now Oslo), received an unexpected visitor. The caller, Oskar Rom, had travelled nearly 100km from his farm at Oseberg to tell tales of a Viking ship burial there. But the museum was in the process of moving, and the director had little time for such fantastic flights of fancy. The farmer received a frosty reception, until he produced a startling proof of his credentials. Herr Rom presented Professor Gustafson with a fragment of wood he had torn from the supposed vessel. Into the director’s disbelieving hands was thrust an intricately carved piece of oak inlaid with silver. Suddenly Oskar Rom was very welcome indeed.

Gabriel Gustafson flew into action. Within 24 hours he was conducting trial excavations at the site, swiftly determining both that there was a burial chamber, and that it had been ransacked centuries earlier. These preliminary soundings also established a ship was present, and that it was still in astonishing shape. When Gustafson returned in 1904, his excavations laid bare the most astonishing burial ever to emerge from Norwegian soil. Although any precious metal had long since been looted, a wealth of more mundane funerary goods survived: bed knobs, buckets, sleighs, luxury textiles, and even a unique cart. The ship itself, once freed from its subterranean mooring, proved to be a work of art in its own right, with its decorative spirals, graceful curves, and slender build triumphantly fusing style and function. With such riches to hand, it is perhaps unsurprising that something as mundane as scattered bones caused little excitement, damning the ship’s final occupants to be overshadowed by their own belongings.

This was not the first time that the Oseberg ladies had been subjected to a post-mortem indignity. The tomb raiders that looted their burial chamber did so without reverence for their mortal remains. Instead, their bones were stripped of their valuables and strewn around the entrance to the plunderer’s passage and base of the ship’s mast. So complete was this disturbance that it took the excavators some time to realise that two women were present, not one. In this, the archaeologists were not aided by the absence of a surprising number of bones, leading to speculation that the body parts adorned with most valuables were picked clean still further afield, wild animals carried them off, or even that the raiders retained them for a grisly cult ritual.

Assessing such incomplete skeletons is not straightforward, and, in the decades following the excavation, two different experts examined the bones. They came to rather different conclusions about the women, although both authorities agreed there was a substantial age gap between them. Despite this lack of consensus, in 1946 the Museum of Antiquities upheld a request for the ladies to be reinterred in the Oseberg mound. This decision bitterly divided the academics working on the material, but in 1948 the skeletons were laid to rest once more, this time forgoing a Viking vessel for an aluminium casket. By then, the older of the two ladies had been hailed as Queen Åsa, mother of the fearsome Halvdan ‘the Black’ according to the Norse sagas. While this claim insinuated itself into school textbooks, the only source of independent information was a small research collection of skeletal material illicitly saved from reburial. Until now.

In 2007 the Oseberg ladies were exhumed again, allowing the full arsenal of modern scientific techniques to be turned on them. As well as testing the conflicting conclusions of over half a century ago, modern analyses are providing valuable insights into the lives of these companions in death. We know more about their diets, DNA, and diseases than ever before. And now that the deceased have taken centre stage, study of the grave goods that eclipsed them over a century ago is being geared towards what these can tell us about their owners. Finally the Oseberg ladies can emerge from the shadows.