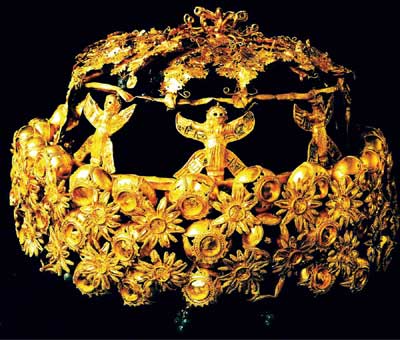 Nimrud is one of the great cities of the Assyrians who dominated Mesopotamia from the 10th century BC down to 612 BC when they were destroyed by the Medes and the Persians. In the Bible they appear as wicked rulers with wonderfully romantic names such as Tiglath-Pileser III. Recently the tombs of some of the great queens have been uncovered in the palace at Nimrud, buried under the floor in the harem with a wonderful collection of treasures in gold and other precious metals.

This glittering gold tiara was found in the tomb of Queen Yaba, the wife of Tiglath-Pileser III, who ruled 744 to 727 BC. The tomb chamber was accompanied by a fine curse, see below, but there was a second body buried with the queen.

In the antechamber to the tomb an inscription was discovered revealing that the tomb was that of Queen Yaba, and cursing anyone who should desecrate the tomb.

However the curse had soon been broken, for the tomb contained not one body but two: Queen Yaba may have been the body on the bottom, but above her was a second female who had been put in perhaps a generation later. This second body had been gently ‘cooked’ to a temperature of 100-200 degrees C: had she perhaps died far from home and been cooked to preserve the body until it could be buried at home in familiar surroundings under the floor of the Royal Palace?

By command of the great gods of the underworld, mortal destiny caught up with Queen Yaba in death, and she travelled the path of her ancestors.

Whoever in time to come, whether a queen who sits on the throne, or a lady of the palace who is a favourite concubine of the king, removes me from my tomb, or place anyone else with me, or lays hand on my jewellery with evil intent, or breaks open the seal of this tomb, let his spirit wander in thirst in the open countryside.

Below, in the Netherworld, let him not receive any libation of pure water, beer, wine, or flour as an offering! May the great gods of the underworld impose on his corpse and spirit, restlessness for all eternity.